MSI has decided to go one step further than competing vendors launching a minimum of a dozen B450 boards, with a  mixture of gaming branded ATX, microATX and Mini-ITX offerings, as well as some more subtle looking models from their budget-friendly Arsenal range. First up is the B450 and B450M Gaming Plus models which aside from sharing similar aesthetics and feature set, the B450 Gaming Plus is full sized ATX, whereas the B450M Gaming Plus conforms to the slightly smaller microATX form factor. 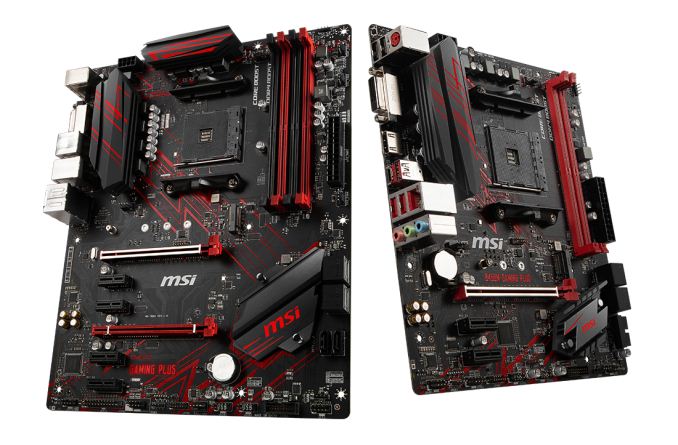 The general theme of the MSI Gaming branding since the introduction back in 2013 has always been red and black, with both these Gaming branded models conforming to that theme. The heatsinks feature a black metallic sheen with red accents which has been carried over and has been printed onto the jet-black PCB. Neither the B450 or B450M Gaming Plus mentions RGB backlighting, but both boards have two 5050 RGB headers built in.

While both boards have support for DDR4-3466 right from the get-go, the B450 Gaming Plus has a total of four RAM slots giving a maximum supported capacity of 64 GB, whereas the B450M Gaming Plus has two slots allowing for a total capacity of up to 32 GB of system memory. 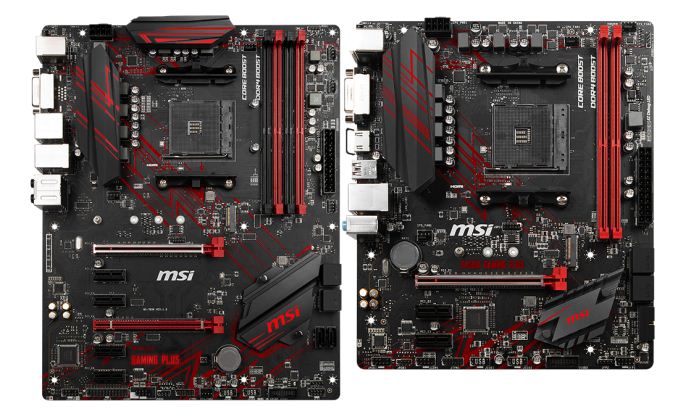 While both boards have a single M.2 slot, the ATX version supports PCIe 3.0 x4/SATA drives up to a maximum size of M.2 22110 (22 x 110 mm), and the microATX B450M Gaming Plus having room for up to M.2 2280 (22 x 80 mm); this is a side effect of having a smaller form factor. The full-sized version has a total of six SATA ports with four featuring right-angled connectors, with the other two sporting straight angled ports. The B450M has a total of four right-angled SATA 6 Gbps ports, with both boards offering the capability for RAID 0, 1 and 10 arrays.

Providing power to both the B450/B450M Gaming Plus is a 24-pin ATX power connector, while the CPU gets an 8-pin ATX 12 V input. From a quick glance the MSI B450M Gaming Plus looks like it has a 4+3 phase configuration, with the ATX sized model having a 4+2 power delivery. The B450 Gaming Plus has a heatsink covering the entirety of the power delivery, whereas the B450M’s heatsink covers the CPU area, leaving the SoC MOSFETs to be passively cooled by whatever method of system cooling is available.

The B450 Gaming Plus has a total of six 4-pin fan connectors with four being set aside for case fans, a single connector for the CPU fan and a dedicated header for water pumps. The B450M Gaming Plus has a three in total with two being dedicated to case fans and one specifically for the CPU fan. Both models have the capability to expand on USB ports, with the B450M Gaming Plus having a total of four internal headers which allows for an additional four USB 3.1 5 Gbps ports and four USB 2.0 ports. The ATX B450 Gaming Plus has the option to add an additional four USB 3.1 5 Gbps ports and two USB 2.0 ports through its internal headers.

The rear panels on both boards look strikingly similar with only a few minor differences. The B450 Gaming Plus has two USB 3.1 10 Gbps Type-A ports, with two USB 3.1 5 Gbps Type-A ports as well as two USB 2.0 ports; both models also feature a Clear CMOS button and a PS/2 keyboard and mouse combo port. The B450 Gaming Plus does have a slightly beefier audio with the six 3.5mm audio jacks being powered by a Realtek ALC892 audio codec, whereas the B450M makes do with three 3.5mm jacks controlled by a slightly lower grade Realtek ALC887 codec. The single LAN port on both boards is driven by the Realtek 8111H Gigabit LAN controller and both boards have support for the Ryzen and Vega APUs with HDMI and DVI-D outputs.

While MSI has limited pricing pre-launch, the B450 Gaming Plus looks to cost around $109.99 at launch which would represent relatively modest value for money. The B450M Gaming Plus should by rights come in at around $99.99, but once official pricing is confirmed on the smaller microATX model, we will update.