The screen of the LG G7 ThinQ has been among one of the most marketed features. The phone distinguishes itself from other devices as it’s one of the rare phones with an RGBW screen. The panel manufactured by LG promises great improvements in terms of power consumption, such as 35% better efficiency thanks to improved light transmissivity enabled by the new white sub-pixel.

The panel uses a proprietary subpixel arrangement called "M+", as such it does not actually have four subpixels per logical pixel as you would expect from a “straight” RGBW implementation. In practical terms this means that there is lower sharpness than a RGB 1440p LCD screen. However at these pixel densities, much like the Diamond Pentile arrangement on OLEDs, I found the visual fidelity loss is absolutely negligible, and results are much better than the 1080 RGBW panel from the Huawei P20.

LG was keen to advertise its settings screen ahead of the G7 launch, which might have lead some, myself included, leading to believe we’ll have some great screen calibration options.

Unfortunately as in the past with LG devices, it seems the company puts very little value in achieving any kind of colour accuracy. The screen has a native gamut of DCI-P3, and essentially all of the profiles included by LG are some sort of variation inside the P3 colour space.

Even the “Expert settings” which includes dedicated sliders for colour saturation, are actually of very little use as the effect is of a non-linear saturation compression rather than a linear saturation reduction. This means that full level colours are still very much hitting the maximum P3 intensities no matter what you do.

On the default profile, the phone’s colour temperature is a horrendous 9000K. There’s very little point in using this as any kind of accurate baseline for measurements as it’s just way off the charts in terms off (in)accuracy.

Indeed the best predefined colour profile is the “Cinema” setting. Even in this setting, the colour temperature reaches 7800K which is still extremely blue. I tried various combinations, and the best possible result you can achieve is by using the “Expert” setting and reducing the blue component to its minimum setting, resulting in something that’s just slightly better than the Cinema setting.

Even in this “best case” setting the accuracy is abominable, as the colour temperature is still way off. While this can be “ok” for most users, what really handicaps the G7 even more is that it’s targeting a really high gamma of >2.5. The accepted industry standard is a gamma of 2.2, and any higher target is meant for speciality professional displays or cinemas. The result is that content on the G7 seems darker than on other phones, and adds to the inaccuracy of its colours. 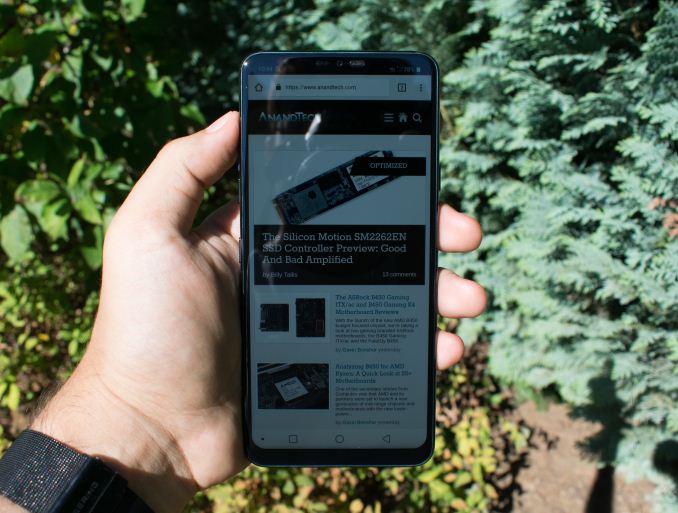 Brightness of the G7 screen is one of its undeniable strengths. At manual maximum brightness the screen reaches 500nits which is plenty bright.

Where the G7 literally shines though is in its auto-brightness mode. Here the screen boosts up to nearly 1000 nits in bright environmental conditions. In the past this boost was only momentary for LG phones, a particular problem which Matt had covered in the G5 review. The G7 fares a lot better here and this maximum boost brightness is seemingly maintained indefinitely. This makes the G7 the by far brightest smartphone released to date and its outdoors usage is outstanding. 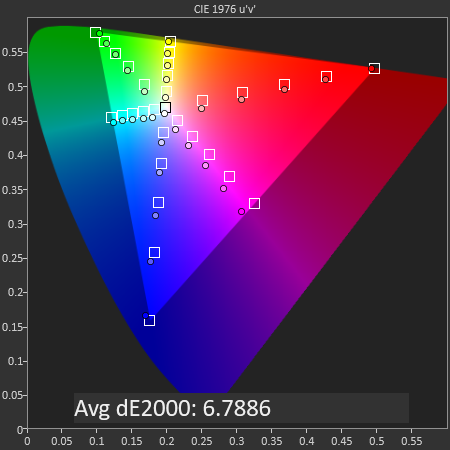 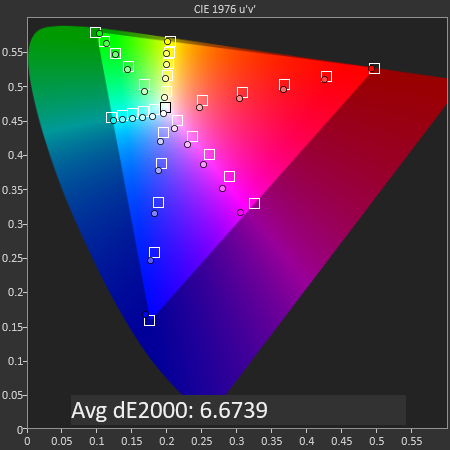 In terms of the saturation accuracy, the only reasonable measurements we can do is in the Cinema and manually adjusted Expert modes. Here the accuracy is bad with a dE2000 of 6.78 and 6.67. 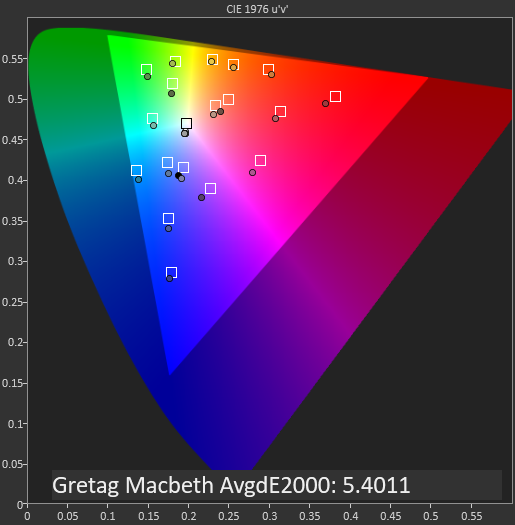 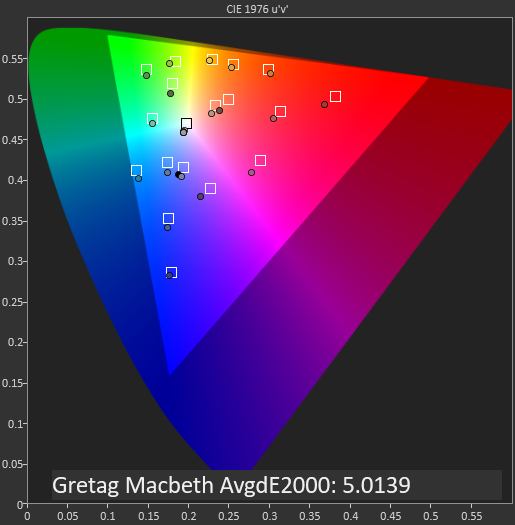 Overall the G7 is a massive disappointment when it comes to colour accuracy as it very much singles itself out as the worst calibrated display in recent memory. This has been a pervasive issue for LG and its phones for a long time now, and it seems the company has no interest in changing it. In the past when we’ve brought this up with them, the rationale was that most users prefer the “punchier” colours.

While this could be somewhat excused in the past, the fact that LG promoted the display settings openly as they did just seems overall misleading to potential consumers as it gives the expectation that there would be an “accurate” setting among all those options, as after all, that’s what has been the status quo on Samsung phones for well over 8 generations now, and more recently that’s now also the behaviour of most other flagships from other vendors.

Display viewing angles, contrast, and brightness are otherwise very solid for the G7 – and were it not for the abysmal colour calibration, this might have been one of the best LCD displays released to date.

Analysing the RGBW panel’s efficiency is of great interest as it really the single most differentiating factor for the G7. RGBW panels promise better power efficiency by having dedicated white sub-pixels which allow for more light to be able to transmitted from the backlight's LEDs through the LCD panel. 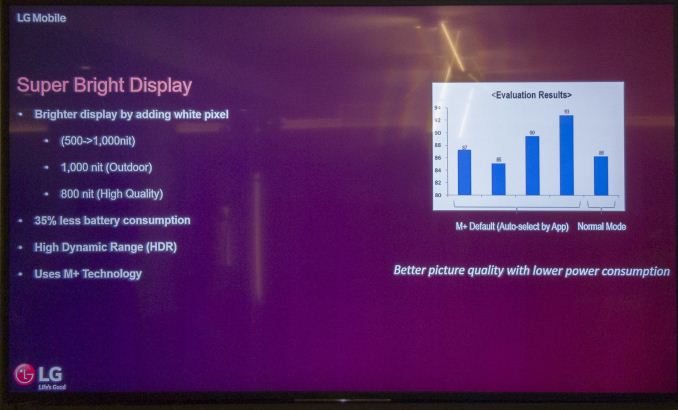 Comparing the screen luminance power at 200 nits, we measure the linear regression in power between the screen at 0 nits and 200 nits.

The G7 posts some outstanding figures here as we’re seeing the single best luminance efficiency of any recently or previously measured devices Overall we see the G7 measuring 36% more efficient than the G6, which is very much almost spot on with the 35% that LG advertised for the phone. This is also a much better figure that what we’ve measured on the Huawei P20, which also promised an efficiency boost through its RGBW panel, but which never materialised.

There’s however a big caveat in terms of power efficiency of the phone / display. While the luminance power is extremely good, the overall total device power isn’t where it's expected to be at. The G7 showcased a very large total device minimum brightness power of 563mW which is significantly higher than the G6’s 347mW. Other phones also vary between 300-400mW so this really eats into the device’s efficiency. This regression in minimum power will still skew the overall efficiency for the G7 well into commonly used brightness levels – for example at 200nits, the G7 is actually less power efficient than the G6, measuring at 830mW vs 717mW.

As to what to attribute this power regression to, I don’t know for sure without doing detailed teardown and rail power measurement on the phone. It’s possible the screen has a much less efficient DDIC as it has to drive the more complex algorithms for the RGBW panel, or it could also be some other non-display related component.

It’s only when pushing the brightness a lot higher when the G7 really pulls ahead of any other device. At 500 nits the luminance power is only 1.34W, and at the maximum 1000nits it’s still only using 2W which is way ahead of any other display panel at similar luminosity levels.

Overall what this means for the phone’s battery life is that the lower the daily brightness level you use, the worse off the G7 battery life will seem, and conversely, the brighter you drive your display in usage, the better will the G7 perform when compared to other devices.