Another Snapdragon 845 device, another system performance section to dwell into. By now following the Galaxy S9 review and Mi MIX 2S review we should have some clear expectations of how the OnePlus 6 should perform. In my MIS 2S review in particular I was very vocal about how superbly the phone performed in terms of performance, and attributed this to a great software implementation on the side of SoC. The OnePlus 6 very much deserves the same praise as it not only has the same extraordinary snappiness, but actually ever so slightly manages to beat the MIX 2S in some cases. 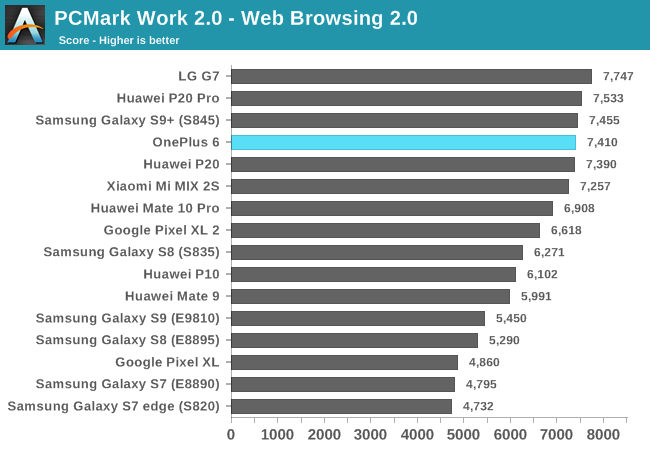 Starting off with PCMark’s Web Browsing test, the OnePlus 6 is very much within the top scorers in terms of performance. 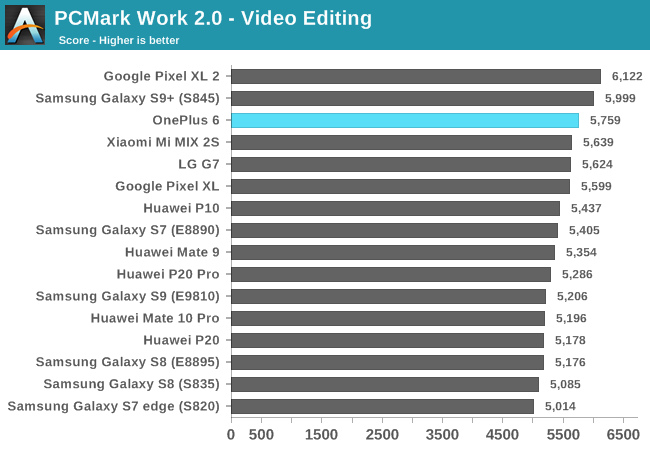 The video editing test again is mostly performing as expected. 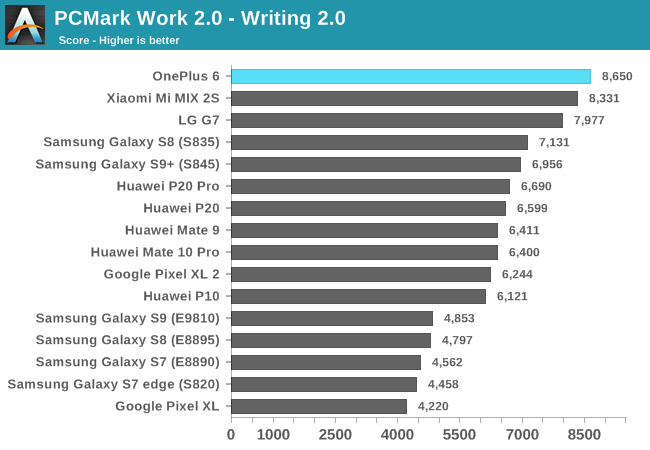 In the Writing 2.0 test which uses Android APIs and does operations such as text editing and PDF rendering the OnePlus 6 actually manages to take the top spot in terms of performance. This test alone correlates extremely well with overall system performance of a phone and the OP6 taking first place is indeed very well representative of the phone’s feel. 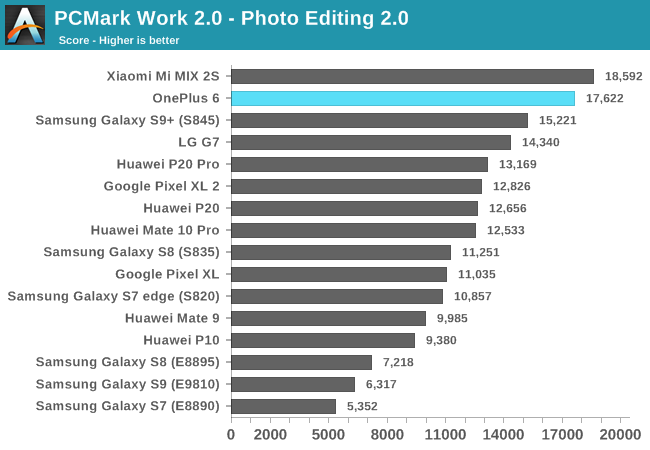 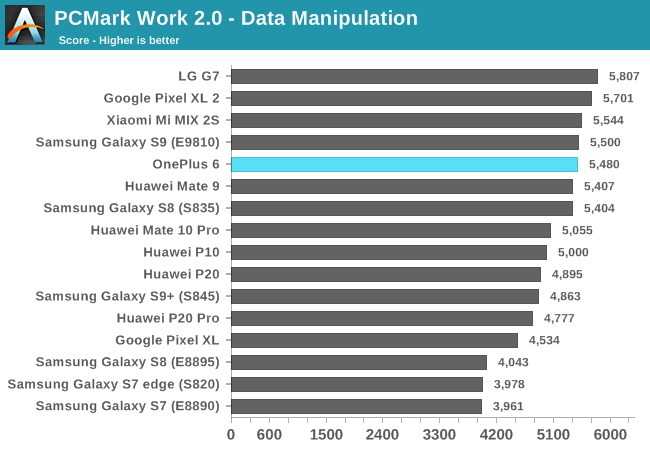 The data manipulation score averages out among top Snapdragon 845 devices. 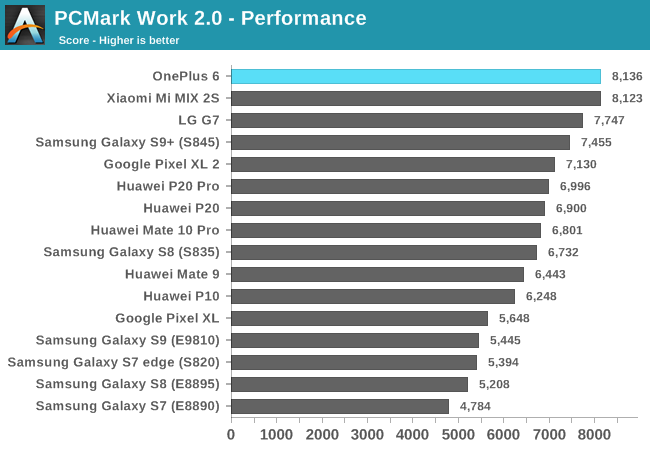 Finally the total score matches the Mi MIX 2S. There’s not much more to say here other than Qualcomm’s scheduler improvements in the S845 BSP have really paid off this generation and this directly results in excellent real-life performance. 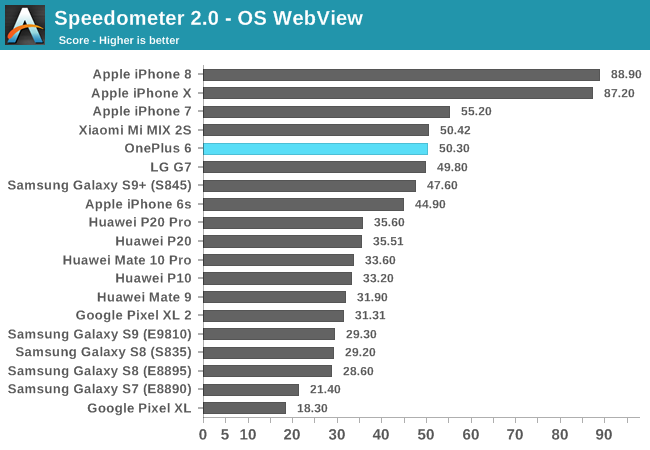 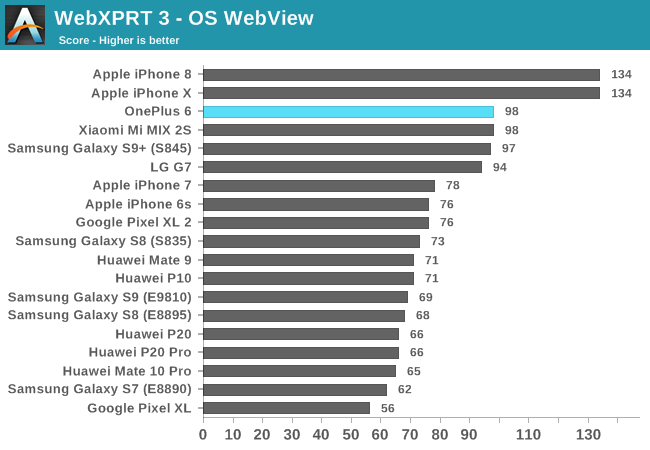 The web tests showcase pretty much identical performance to the Mi MIX 2S which in turn both slightly outperform other S845 devices such as the Galaxy S9 and LG G7.

Over the past few months there’s been more outspoken discussions about Android speed tests versus actual device fluidity. In general the latter is extremely hard to quantize into a figure and there will always be corner cases or outliers that will probably perform better or worse when comparing between devices.

In the context of the OnePlus 6 as well as Snapdragon 845 devices I’ve looked more into what actually is different between them and what is seemingly causing the OP6 and MIX 2S to perform better than, say the Snapdragon Galaxy S9.  Looking deeper into the kernel it looks like OnePlus and Xiaomi are both using a newer kernel build with more scheduler modifications than the kernels running on the S9 and G7. The details here go quite low level and is out of the scope of any public article, but the effects can be easily seen.

In the UIBench Jitter test we see the difference between the OnePlus 6 and the Galaxy S9 – the latter has a lore more inconsistent rendering frame-times. While in this test both have very clearly great frame-times well under 16.6ms – having more consistent frame times in turn can avoid random workload events that might push frame times over the deadline and result in dropped frames. The OnePlus 6 so far has been the best device in this particular test – only the Pixel phones come near to it but they don’t seem to have the same consistency over time.

Overall system performance of the OnePlus 6 deserves the same praise as the MIX 2S – both devices are currently the very best and fastest on the market and you will be absolutely not disappointed in their performances.