So far we’ve seen that the Acer Swift 3 can show off the strengths of the AMD Ryzen mobile platform, but how does it fare at mobility? The Ryzen SoC, Raven Ridge, offers the same Thermal Design Power as Intel’s U series, at 15 Watts. But that’s the maximum power draw on sustained loads, and at light loads, both systems will be well under that. Plus, there’s the platform to look at as well. Acer has outfitted the Swift 3 with a 1920x1080 display, which is going to help because it’s not high DPI, but AMD is also only supporting DDR4 RAM which is going to be a larger power draw than LPDDR3.

Also, despite being a larger form factor device, the Acer Swift 3 only has a 48 Wh battery, which is fairly small by today’s standards. This is likely due to the segment they are targeting with their pricing, because they would certainly have room for more. A Surface Book 2 15-inch model offers 85 Wh of capacity, and a Dell XPS 15 can have up to 97 Wh. But both of those devices cost far more than the Acer.

To test battery life, we run the system through several tests with the display set at 200 nits. A note will have to be made here though. The AMD drivers, by default, use a VeriBright setting to reduce the screen brightness on battery. This had to be disabled because with it on the laptop can’t even get to 200 nits. Luckily, once it was disabled, there were no issues, and we didn’t run into any CABC nuttiness either. 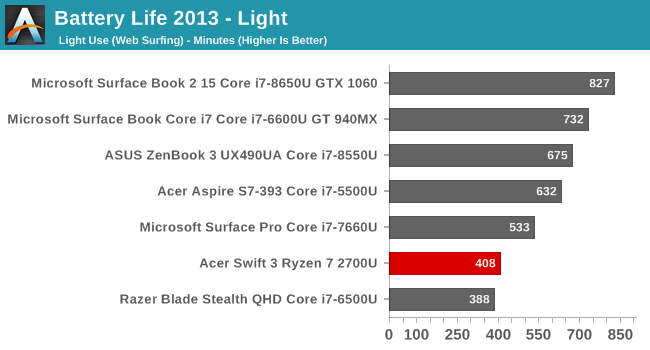 On this test, the system got almost seven hours, which isn’t terrible considering the small battery capacity. It’s well off the best in this segment, but when you have half the battery compared to some of the competition, that’s likely not a surprise.

Our 2016 test is a more demanding test which puts the CPU to work for longer, and more often. Here we got pretty close to the 2013 test, which is pretty easy for most systems these days, which gives a hint that the CPU efficiency is pretty decent, and other parts of the platform are more of a draw. 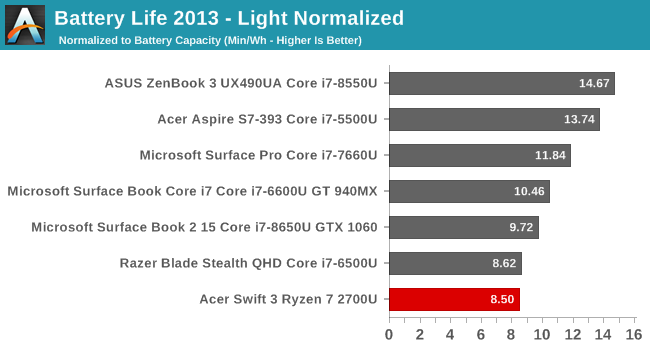 By removing the battery size from the equation, we can get a feel for how the system efficiency is. The Acer Swift 3 is definitely not in the top of the 2013 result, providing efficiency that’s normally a higher resolution device on our lightest test, but on the more demanding 2016 test, it makes a comeback with a strong result. We’ll dig into this more in a minute.

At about six hours, the movie playback is good, but not great. On Intel systems, we generally see this as one of the highest results, because the decode is offloaded to fixed function hardware that is very efficient. There’s no doubt that AMD also offloads, but their average power draw is slightly higher.

Digging into the platform power

So in our battery testing, we came upon some interesting results. The overall efficiency isn’t as high as other Ultrabooks we’ve tested on really light workloads, but the result increases against those same devices on more demanding workloads. What this says is that the CPU is likely not the leading drain on the battery, but rather other parts of the system are more demanding, so the CPU power draw is somewhat masked by higher draw around it. It’s very much the same thing we’d see in a gaming laptop, where the overall base power draw is so high that the small extra power draw of the CPU under these somewhat light loads is just a smaller percentage of the total.

Since this is our first Raven Ridge device, it is interesting to dig into this a bit more, so some extra power draw measurements were done. But, at the same time, since this is the only Ryzen laptop we’ve tested so far, any conclusions are going to be best theories, because we can’t pull the system apart and measure power draw all over the board.

The system was tested at idle, with the display on at 200 nits, as well as off, so the display power could be calculated.

At idle, with the display on, the system averaged about 5.71 Watts at 200 nits brightness. That’s actually right around the same as a Surface Book 2, which draws 5.53 Watts at idle at 200 nits. But a huge factor in the Surface Book 2 is its 15-inch 3240x2160 display, which is a full 4.1 Watts of draw. The Acer Swift 3’s display accounts for only a measly 1.16 Watts. This is due to a couple of factors. First, it’s only 1920x1080 resolution, which is 3.38 times less pixels, so it doesn’t need as powerful of a backlight to hit the same 200 nits brightness. Second, the display isn’t even close to covering the entire sRGB spectrum on the Acer, meaning the LEDs are going to be less power hungry as well.

So that leaves us with 4.55 Watts of idle power draw when the display is off. That’s a lot for a laptop. The same Surface Book 2, by comparison, draws just 1.43 Watts at idle when the display power is off.

Without being able to dissect and test the laptop, and without other Raven Ridge laptops to compare against, it would be impossible to state definitively why the idle power draw is so high. The CPU is only reporting about 0.91 Watts draw on its own, so it’s not likely that AMD has higher idle power draw, however they do require DDR4 memory, which is going to consume more power than LPDDR3. AMD needs LPDDR4 to come to market. That’s likely a portion of the difference right there. We’ll have to test a few more systems to draw conclusions, but it also shows that the Acer helps mask this extra power draw with a very efficient display.

Acer supplies the Swift 3 with a 45-Watt AC Adapter, which is pretty common on these types of laptops. When the CPU and GPU combined have a TDP of just 15 Watts, this is going to be plenty to charge the laptop while working at the same time. 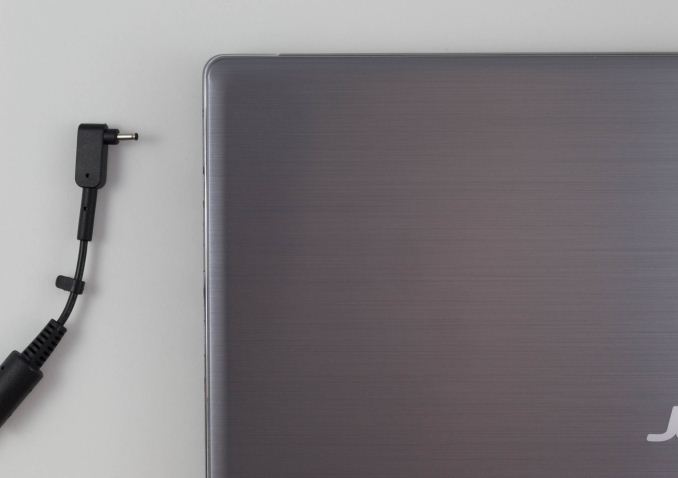 Acer still uses their barrel plug on the Swift 3, and they really need to move to USB-C for their charging across the board. Acer uses a very thin barrel, and it feels like it could just snap off at any time. Certainly, if the laptop was bumped while charging, it would be incredibly easy to bend or break this connector. It’s something they’ve been using for years, but at the same time, USB-C charging is a much more robust connector, and means you should be able to find a replacement either. 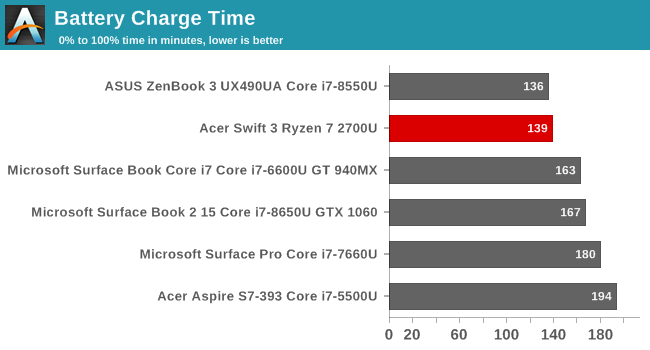 So with that issue aside, the Acer Swift 3’s charge time is quite good. The smaller adapter power output is easily offset by a smaller than average battery, so the overall charge time is just under 2:20.