Measuring the full bandwidth potential of a system with John McCalpin's Stream bandwidth benchmark is getting increasingly difficult on the latest CPUs, as core and memory channel counts have continued to grow.  As you can see from the results below, it not easy to measure bandwidth. The result vary wildly depending on the setting you choose.

Theoretically, the ThunderX2 has 33% more bandwidth available than an Intel Xeon, as the SoC has 8 memory channels compared to Intel's six channels. These high bandwidth numbers can only be achieved in very specific conditions and require quite a bit of tuning to avoid reaching out to remote memory. In particular, we have to ensure that threads don't migrate from one socket to the other.

We first tried to achieve the best results on both architectures. In case of Intel the ICC compiler always produced better results with some low level optimizations inside the stream loops. In case of Cavium, we followed the instructions of Cavium. So strictly speaking these are not comparable, but it should give you an idea of what kind of bandwidth these CPUs can achieve at their respective peaks. To be fair to Intel, with ideal settings (AVX-512) you should be able to achieve 200 GB/s.

Nevertheless, it is clear that the ThunderX2 system can deliver between 15% and 28% more bandwidth to its CPU cores. This works out to 235 GB/sec, or about 120 GB/sec per socket. Which in turn is about 3 times more than what the original ThunderX was capable off.

While Bandwidth measurements are only relevant to a small part of the server market, almost every application is heavily impacted by the latency of memory subsystem. To that end, we used LMBench in an effort to try to measure cache and memory latency. The numbers we looked at were "Random load latency stride=16 Bytes". Note that we're expressing the L3 cache and DRAM latency in nanoseconds since we don't have accurate L3-cache clockspeed values.

The L2-cache of the ThunderX2 is accessed with very little latency, and with a single thread running, the L3-cache is competitive with the Intel's complex L3 cache. Once we hit the DRAM however, Intel offers significantly lower latency.

To get a deeper understanding of the respective architectures, we also ran the open source TinyMemBench benchmark. The source code was compiled with GCC 7.2 and the optimization level was set to "-O3". The benchmark's testing strategy is described rather well in its manual:

We tested with single and dual random read (no huge pages), as we wanted to see how the memory system coped with multiple read requests. 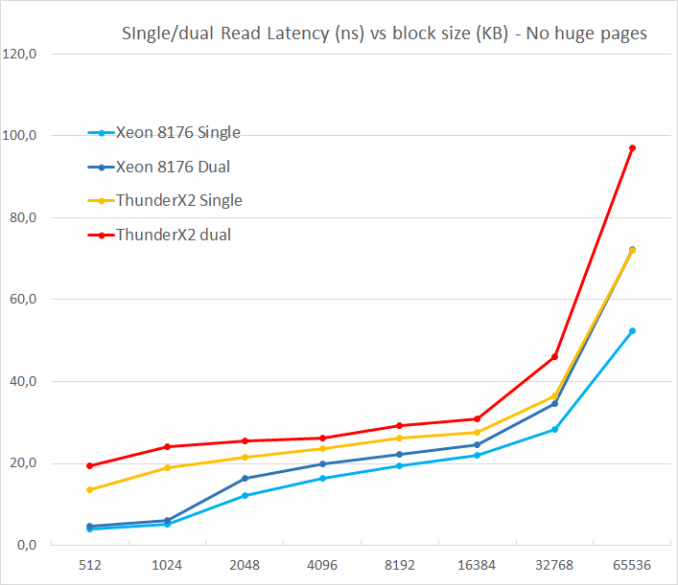 One of the major weaknesses of the original ThunderX was that it did not support multiple outstanding misses. Memory level parallelism is an important feature for any high-performance modern CPU core: using it it avoids cache misses that would starve the wide back end. A non-blocking cache is thus a key feature for wide cores.

The ThunderX2 does not suffer from that problem at all, thanks to its non-blocking cache. Just like the Skylake core in the Xeon 8176, a second read causes the overall latency to increase by only 15-30%, and not 100%. According to TinyMemBench, the Skylake core has tangibly better latencies.  The datapoint at 512 KB is of course easy to explain: the Skylake core is still fetching from its fast L2, while the ThunderX2 core has to access its L3. But the numbers at 1 and 2 MB indicate that Intel's prefetchers offer a serious advantage as the latency stays is an averag of the L2 and the L3-cache. Around 8 to 16 MB, the latency numbers are close, but once we go beyond the L3 (64 MB), Intel's Skylake offers lower memory latencies.