As it currently stands, all of the Ryzen and Ryzen 2 desktop processors on the market all feature unlocked multipliers which puts the burden of overclockability onto the motherboard vendors to ensure that users have the right tools for the job. The X470 Taichi Ultimate has a colossal power delivery and users looking to push their unlocked Ryzen processor beyond the rated specifications shouldn’t have too much problem here; not just for the overkill phase count, but the quality of the power delivery itself. The BIOS is somewhat easy to navigate and all of the overclocking options can be found within the OC Tweaker subsection.

The Taichi Ultimate does not have any auto overclocking features outside of the ability to load XMP profiles on the memory, so all and any CPU frequency and APU/PCIE frequency if a user wishes to use an APU such as the Ryzen 5 2400G has to be done manually. To do so, setting the overclock mode setting from auto to manual allows users to customize and tweak options including CPU Frequency and CPU voltage; two vital settings for overclocking CPU core frequency. 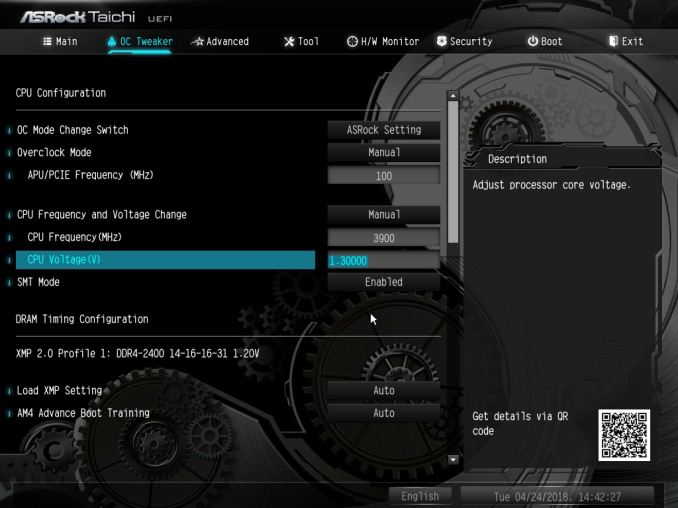 Our Ryzen 7 1700 CPU does have a limitation between 3.9 GHz and 4.0 GHz; at least on the boards, we have tested thus far. This is down to silicon lottery and a combination of a sharp ramp of voltage to temperature when moving up each different step; therefore, cutting out/throttling due to thermal limitations when pushed too far on ambient cooling.

At the time of testing, the motherboard had a tendency to undervolt the processor with a full load applied, although not by an excessive amount and not one which would cause instability issues in testing other than at 3.9 GHz when the undervolting proved insufficient for the load applied. Interestingly enough, our sample even managed to boot up at 4.1 GHz with a set voltage of 1.437 V, although this was very unstable when any load was applied. Our maximum stable overclock achieved was 4.0 GHz at 1.4 V, although the motherboard did settle at 1.376 V under load, even though the overclock did fail in Pov-Ray with a similar set voltage at 3.9 GHz as previously noted. A notable and consistent increase in Pov-Ray performance was apparent as each frequency strap was increased.