The UEFI BIOS on the ASRock X470 Taichi Ultimate is essentially the same UEFI BIOS used in the ASRock X370 Gaming-ITX/ac review with a graphical design tantamount to the aesthetics of the motherboards PCB. The BIOS consists of a single mode meaning no split beginner or advanced modes which span across sections which includes OC Tweaker, Advanced, Tool, H/W Monitor, Security, Boot and the Exit sections. These are virtually identical in features and functions to the BIOS of the last ASRock AM4 motherboard we reviewed (The ASRock X370 Gaming-ITX/ac). The right hand side of the BIOS has a handy description which provides information about the setting or function currently highlighted in the BIOS; there is also a QR code which can be used to garner further information. 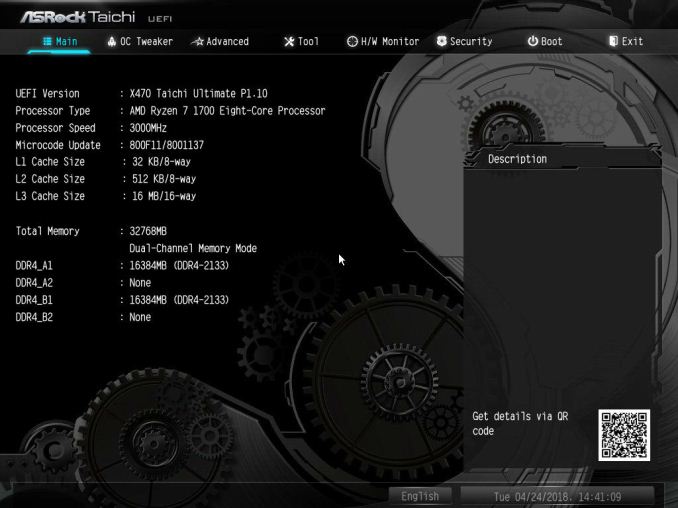 After using either the F2 or Del key to enter the BIOS during POST, the entry splash screen on the ASRock X470 Taichi Ultimate motherboard lists key information including the current BIOS revision installed, information about the installed processor and its clock speeds, as well as the installed memory including whether or not the memory is operating in single or dual channel mode, as well as the capacity displayed in both in a single slot and total memory. 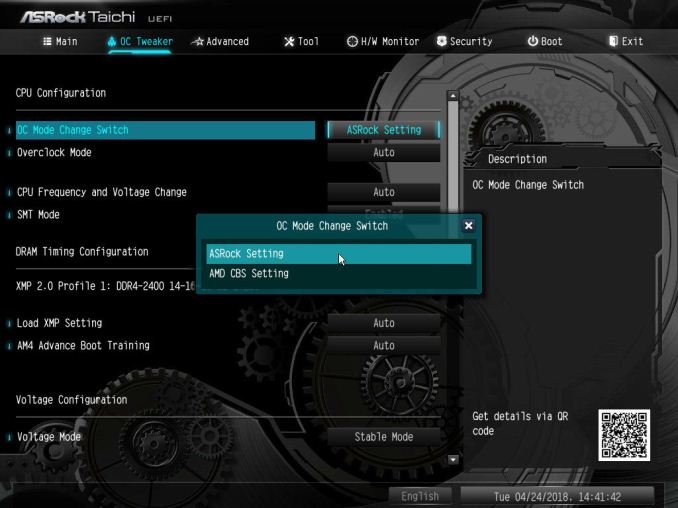 The next section across from the main splash screen is the OC Tweaker menu which holds all the keys to overclock and customize various factors such as CPU core frequency, memory frequency and timings, integrated graphics frequency and various voltages. To enable the core frequency and voltage options, selecting the ASRock setting in the OC Mode Change Switch option will allow these to be adjusted. The X470 Taichi Ultimate has no automatic overclocking options aside from the ability to load the installed DDR4’s XMP 2.0 profile which can be done via the Load XMP Setting option. 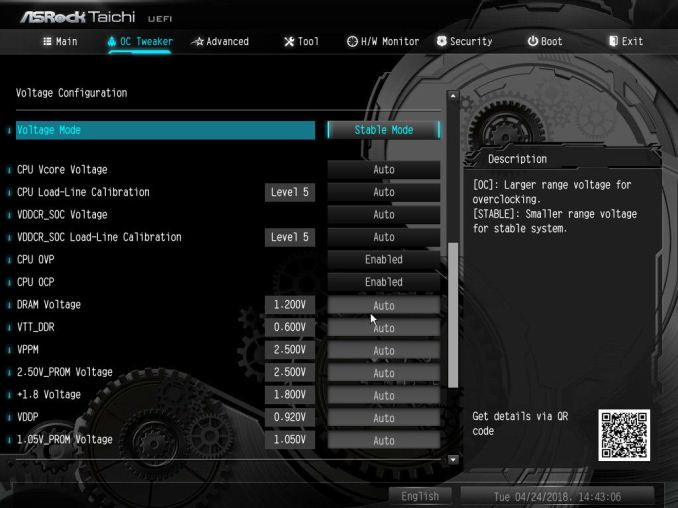 Other options within the OC Tweaker section allow users to fine-tune and customize their overclocks with one important feature for users cooling with extreme methods being the voltage mode. Just like the LN2 mode switch that you find on overclocking focused boards such as the ASUS ROG Maximus X Apex, the switch itself is in the UEFI BIOS on the ASRock X470 Taichi Ultimate comes under the Voltage Mode option. Switching from the 'Stable' mode to 'OC' mode. The only differences between the two modes are OC mode allows for a wider variation in voltage and unless you're using very aggressive 24/7 cooling methods such as a water chiller, or making the die squeal under liquid nitrogen, the stable mode is more than adequate for 24/7 usage. Notable voltage options include CPU Vcore Voltage for overclocking the CPU frequency, DRAM Voltage for the memory frequency and timings, as well as VDDCR_SOC Voltage which is a key option in overclocking the Ryzen APUs onboard graphics. 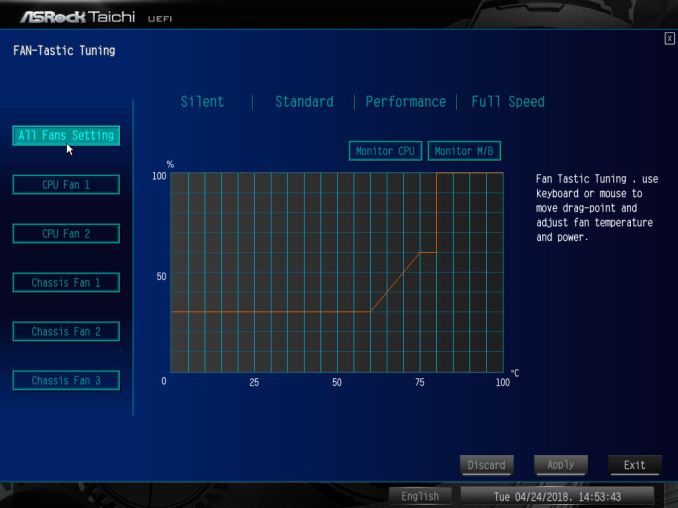 Most motherboard vendors include at least some form of automatic fan profiling, some basic and some more advanced. The FAN-Tastic Tuning utility by ASRock allows users to set custom profiles via curves against fan speed percentage against temperature in real time. Each of the individual headers can be customized to give a different degree of performance, or for the simpler builders, all the fans can be set using the same profile. 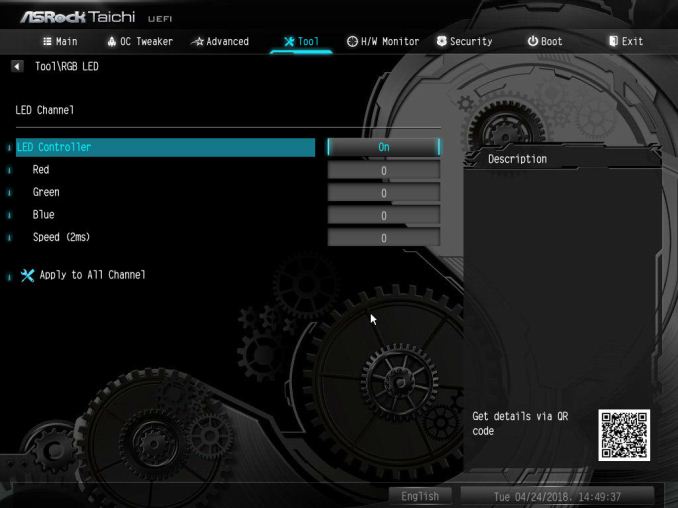 While this has been picked up in previous ASRock AM4 motherboard reviews including the previous ASRock X370 Gaming-ITX/ac review, the integrated RGB controller within the BIOS could really do with some improvement as all that ASRock has offered is a very primitive looking set of options for predefined numbering. If the user isn’t familiar with the individual RGB color codes, it’s a simple case of doing a bit of research or guesswork to achieve the desired effectual glow. This is unacceptable from a manufacturer that sells an upgraded version of RGB (Polychrome Sync) as one of the main features but has such limited function within the BIOS. Of course, the user can download the ASRock Polychrome RGB software which is very intuitive so credit where credit is due, but I have to question why a $300 flagship model has such primordial onboard UEFI function; in this case, it would almost be better to leave it off the table at all and make the software a prerequisite for the best user experience until the BIOS function was more up to task.

Unlike other ASRock AM4 boards that have been on test so far, the X470 Taichi Ultimate is the first not to be targeted specifically at gamers - the gaming editions all have the aggressive Fatal1ty red and black branding. With gaming not being the main selling point, it shifts the type of software available and limiting the use of some of the non-essential ones omitted. The key software supplied includes the A-Tuning software, ASRock’s Live update and App Shop utility, as well as the functional, but aesthetically basic Realtek HD Audio Manager software and ASRock Polychrome RGB utility. 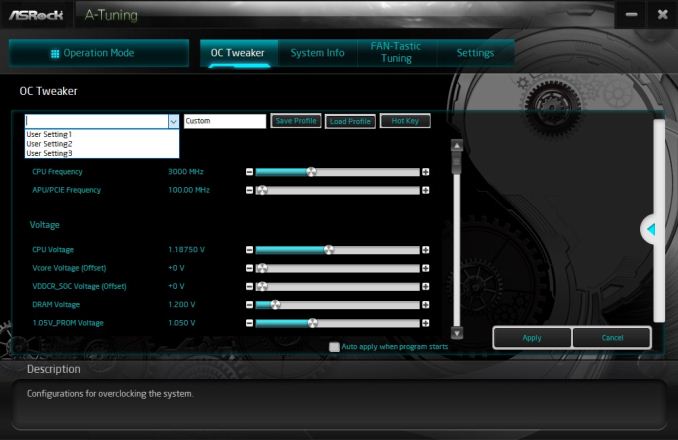 What is essentially the F-Stream Tuning utility re-skinned and with a subtle redesign (or vice versa), the A-Tuning software allows users to overclock their Ryzen based processors without needing to do so in the BIOS. While most vendors have at least one piece of software to enable GUI overclocking within the operating system, the A-Tuning software does offer a pretty comprehensive amount of options for overclocking the CPU, DRAM, fine-tuning the voltages and even the APU/PCIe frequency which is particularly useful for overclocking the Ryzen based APUs including the Ryzen 5 2400G ($169). All of the key voltage options such as DRAM, CPU Vcore, VDDCR_SOC and even VDDP can be adjusted with A-Tuning. 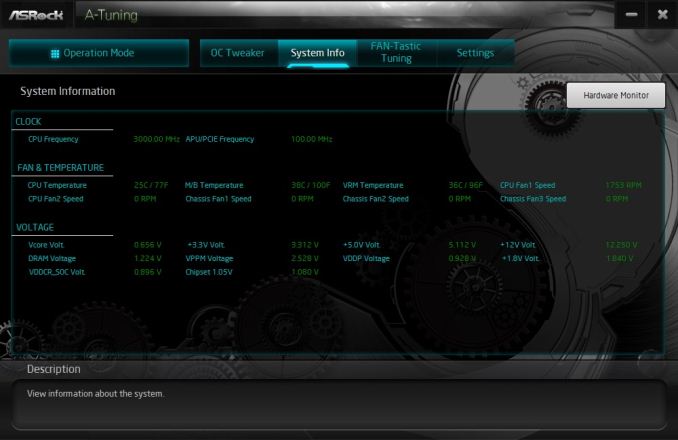 On top of a host of overclocking options (which I have to add are all available in the BIOS), the A-Tuning also offers a system information panel which gives real-time information regarding frequencies set, voltage levels for a variety of different voltages and temperature/fan speed monitoring. The A-Tuning also offers a direct route to the FAN-Tastic Tuning utility for setting user-defined profiles based on their needs. 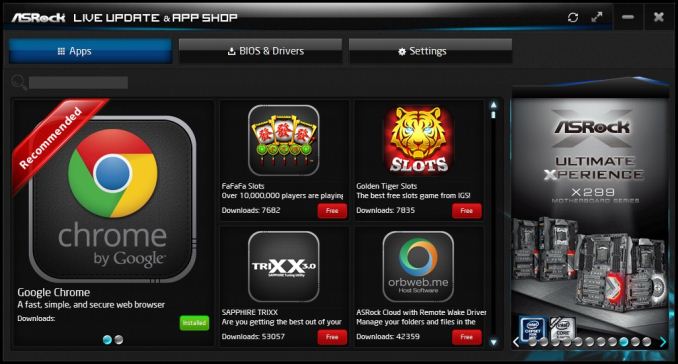 The ASRock Live Update andr App Shop software does exactly what it says on the tin; offers users a place to download applicable software and even paid apps (which I personally don’t like to see from any vendor if I'm honest). The software does prove very functional, especially for updating older chipset drives as well as offering an easy and simple way of finding out if the board is running the latest firmware available. 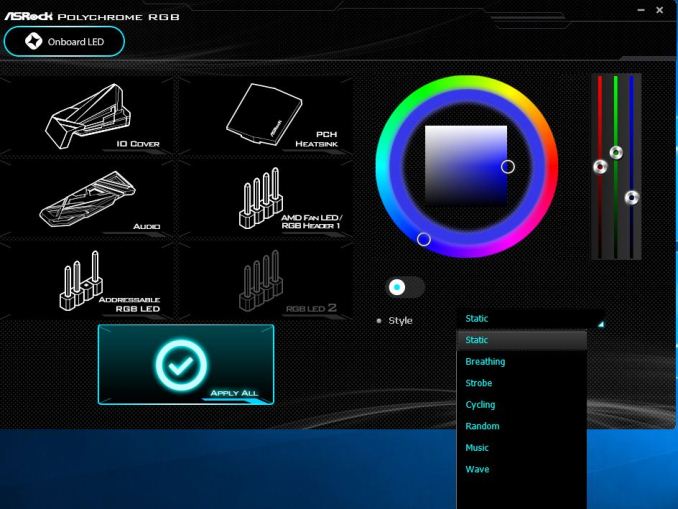 While I have been critical in the BIOS section about the distinct lack of modernization when it comes to the RGB function, once the ASRock Polychrome RGB software is installed, it actually does a fantastic job. The X470 Taichi Ultimate has six different customizable areas when it comes to RGB including the IO cover, the audio section of the PCB, the PCH heatsink and the three different headers; the AMD Fan LED/RGB header, the addressable RGB header and a secondary 4-pin RGB header. All of these can be combined to create a form of aesthetical unity with seven different LED modes including static, breathing and even wave. The RGB color jog wheel is easy to use and it’s worth mentioning that each of the six customizable areas can feature different colors for a rainbow effect; if the intended end-user is into fluffiness and all things unicorns! 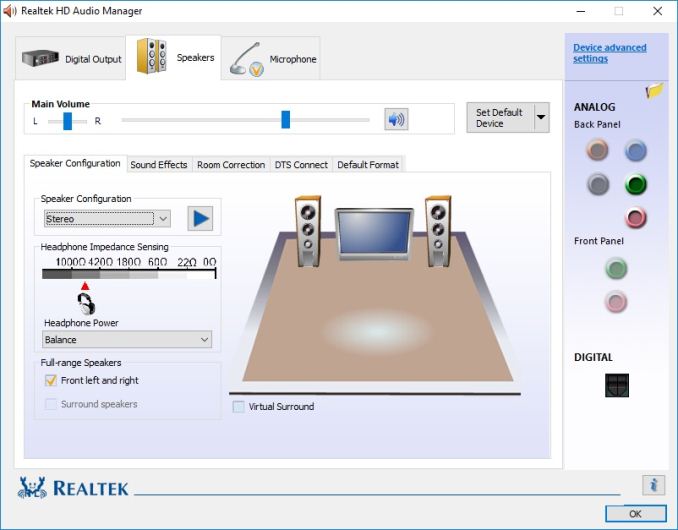 Although more of a personal preference, I am disappointed that ASRock has omitted to go with a third party audio software OEM and has elected to use the very outdated and basic looking Realtek HD Audio Manager. While the software itself is very functional and has lots of room for customization including setting the speaker configuration, adding environmental effects such as padded cell, cave and arena, the GUI looks like it was skinned back in the early 2000’s. Even DTS Neo:PC functionality is present which is good for music lovers looking to make use of the Realtek ALC 1220 audio codecs S/PDIF optical output. On the right-hand side of the software screens is a layout of the rear panel on the board with an indicator of which output has a jack connected, even front panel audio is catered for.

It’s just somewhat of a shame that the software looks very outdated and doesn’t match up with the rest of the Taichi Ultimate’s package; the implementation of the Realtek HD Audio Manager seems a little lazy and lackluster to say the least for a $300 offering aiming to be the top of the pops on the new X470 motherboard range.