The GIGABYTE B360 Gaming 3 WIFI Review: A Cheaper Alternative at $120

Power consumption was tested on the system while in a single GPU configuration with a wall meter connected to the Corsair HX 750 power supply. This power supply is Platinum rated. As I am in the US on a 120 V supply, leads to ~87% efficiency > 75W, and 92%+ efficiency at 375W, suitable for both idle and multi-GPU loading. This method of power reading allows us to compare the power management of the UEFI and the board to supply components with power under load, and includes typical PSU losses due to efficiency. These are the real world values that consumers may expect from a typical system (minus the monitor) using this motherboard.

Our Power Consumption tests show the GIGABYTE B360 Gaming 3 Wi-Fi taking at the top of our charts on power use. In both idle states as well as our load testing, it managed to use the least amount of power of the tested systems so far with 37W/41W in the idle testing, and 118W in load testing. The load testing shows a difference of nearly 20W from the first Z370 based board, and 1W less than the H370N WIFI.

Different motherboards have different POST sequences before an operating system is initialized. A lot of this is dependent on the board itself, and POST boot time is determined by the controllers on board (and the sequence of how those extras are organized). As part of our testing, we look at the POST Boot Time using a stopwatch. This is the time from pressing the ON button on the computer to when Windows 10 starts loading. (We discount Windows loading as it is highly variable given Windows specific features. 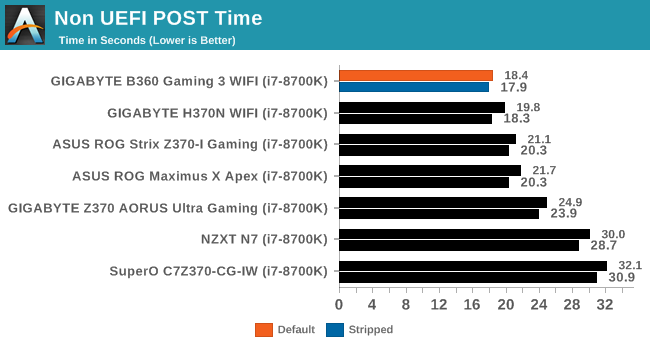 POST times on this board also managed to break new records in our testing with a POST time of 18.4 seconds. When we disabled additional controllers and such, that dropped about a half second. Otherwise, its fairly close set of results in the top half with three seconds separating most of the boards. We do have some outliers in the NZXT and SuperO boards taking 30 seconds or more to boot.

Our DPC latency results for the AORUS B360 Gaming 3 WIFI reached 357µs which is the slowest result so far. The rule of thumb here is anything under 300µs should allow for smooth audio, but it does not sneak in under that value. Try as I may, I did not hear any audio drops or losses with this result.