A Focus on Power

For our reviews, AMD shipped us two motherboards: the ASUS ROG Crosshair VII Hero (Wi-Fi) and the MSI X470 Gaming M7 AC. These will be two of the high-end halo motherboards to focus on the new X470 chipset. 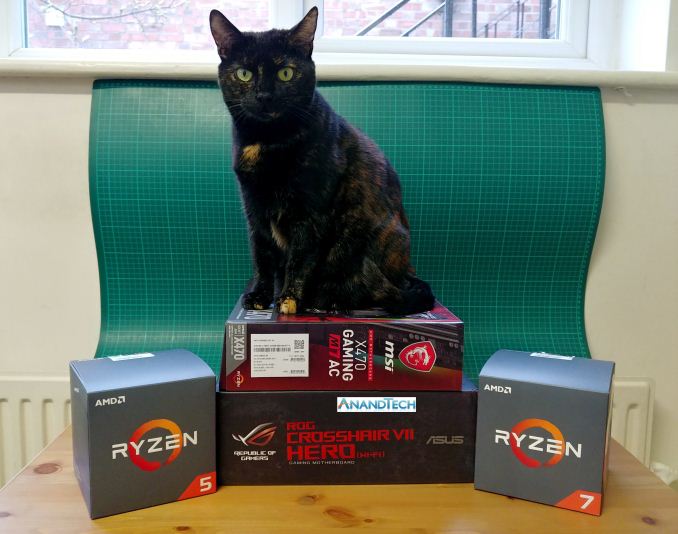 Katamari loves motherboards. Or just loves sitting on my review samples. (ed: it's the latter)

The new X470 chipset is designed to sit above the X370 chipset, although looking at the specifications, users might be forgiven for not seeing a difference. Technically the X470 part has identical PCIe and SATA support to the older X370 chipset, and for a while AMD will be running both chipsets concurrently for the main motherboard manufacturers to use. Both sets of boards will be using the AM4 chipset, which AMD has guaranteed to support for several generations now.

The big change in the chipset will be in the power consumption. Currently the X370 chipset, built on a 55nm manufacturing process using ASMedia IP, runs at a 6.8W TDP (running at full load). For X470, we were told that this is the same process and IP, but the chip will now run at 4.8W peak and 1.9W in an idle mode. This is due to an improved power infrastructure within the chip, and AMD also claims that overall throughput is improved. The chipset firmware is also set to provide better memory OC support and stability.

The other factor in this is StoreMI, on the next page. This new feature technically does not require chipset support, however the free installer will check for the presence of an X470 chipset before providing a free license, otherwise the software will cost $20 and not have AMD branding.

All X470 boards, and X370 boards with the latest BIOS updates, will support the new Ryzen 2nd Gen processors. X370 motherboards that have had the BIOS updated already will have the ‘Ryzen 2000 Desktop Ready’ logo attached on the box, however X470 boards will automatically be covered.

For users in that buy an X370/B350/A320 motherboard that has old firmware, AMD has a support page to manage the issue. Users should first reach out to the retailer for a replacement board with an updated BIOS, but failing that, users with verified purchases can obtain an “AMD Boot Kit” – a short term loan of an A-series processor with which people can update the BIOS for their new processor.

AMD will supply the kit, free of charge, if the user can:

This means that users who want to take advantage of the Boot Kit will have to buy retail components, and buy them second hand. The kit will have an A-series (Bristol Ridge) processor and a cooler, as well as a pre-paid return label for the hardware. Offering a kit like this for a motherboard BIOS update is relatively unheard of, as previously users would have to go through the retailer and pay for an RMA. However, one might suggest that AMD has enough A-series processors in stock for this to not be much of an issue, and the positive reaction from such a service outweighs the sending and return costs.

Users that need a Boot Kit can go to this link to find the official details.

Each manufacturer has already announced a handful of new motherboards for the chipset, although it is clear this is not a full stack.

Most vendors will run the X470 and X370 chipsets side by side, with the X470 taking up some of the more premium offerings at this time.

The first board we opened was the ASUS ROG Crosshair VII Hero (Wi-Fi), with the box well and truly battered either by shipping or how it was stored. 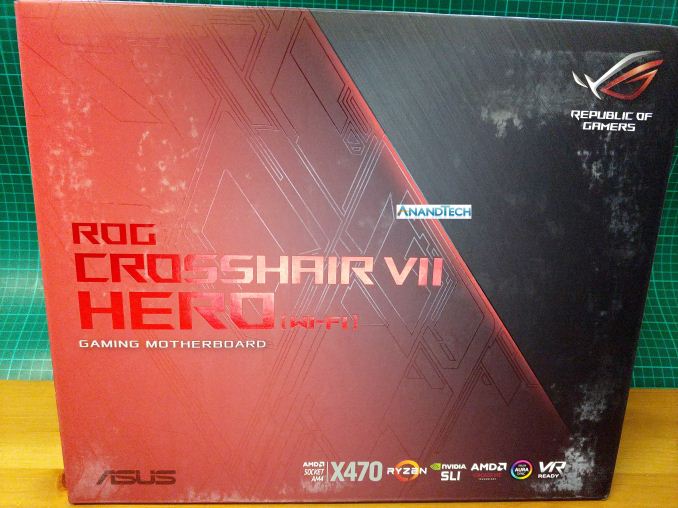 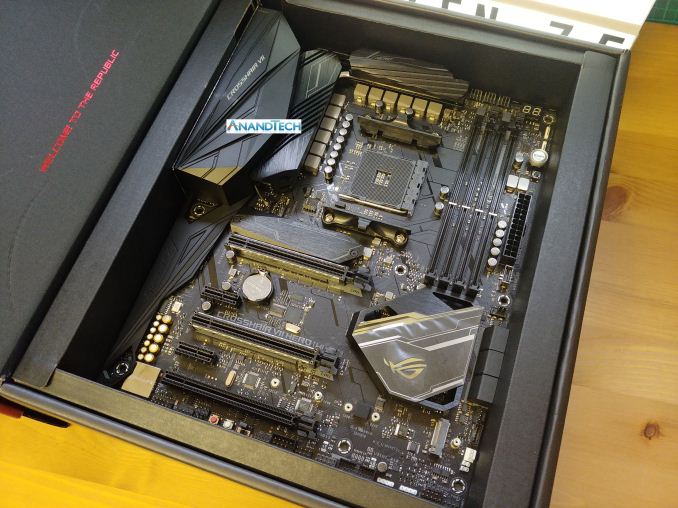 At first glance we already see a few notable features: a combined 12-phase power delivery (likely 10+2) on the CPU, with dual M.2 slots and reinforced PCIe for x8/x8 SLI operation. The rear IO panel is pre-attached to the system with the shroud, and there is a small cable connecting the integrated LEDs on the motherboard. 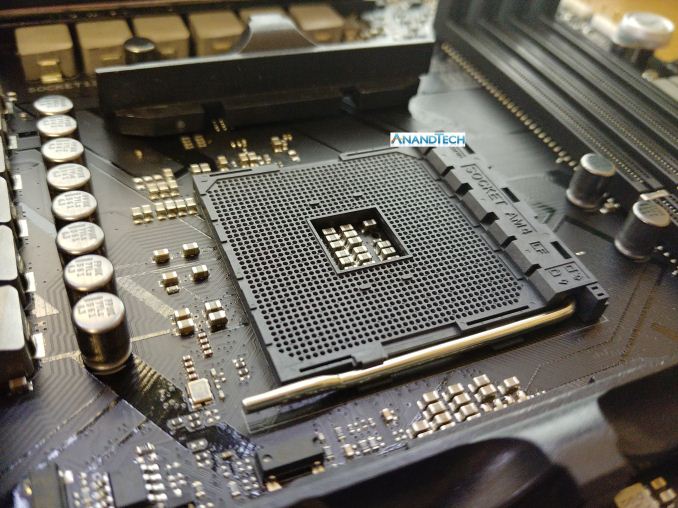 The socket is the same as before: AM4 with 1331 holes for the processor. The latch mechanism is the same, as are the cooler dimensions.

ASUS has added a number of RGB headers on the board, as well as what looks like easy-to-use voltage read points or points to enable any 5V operation (such as cold-cathode lighting?).

With the two M.2 sockets, one will be PCIe 3.0 x4 from the CPU and the other is PCIe 2.0 x4 from the chipset. For other storage needs, there are six SATA ports as well.

Onboard are a variety of USB 3.1, USB 3.0, and USB 2.0 ports and headers, although I found it quite amusing that ASUS decided to put ‘native USB’ on this header to signify that it is from the chipset and not from a controller. This has benefits for VR that requires native ports, allowing the user to put front panel connectors into the native USB headers.

Being a halo board, ASUS has put in its SupremeFX audio configuration. This is based on a custom Realtek ALC1220A codec, Nichicon audio capacitors, an EMI shield, PCB separation, and bundled software.

On the back we get ASUS BIOS Flashback button, such that users can upgrade the BIOS without the CPU/GPU/DRAM installed, a Clear CMOS button, the 802.11ac Wi-Fi, two USB 2.0 ports, a combination PS/2 port, eight USB 3.0 ports, two USB 3.1 ports (one Type-C), the gigabit Ethernet port, and the audio jacks.

By contrast, the MSI X470 Gaming M7 AC box was not bashed up, and showed the picture of the motherboard directly on the front. Normally we are used to seeing MSI and the ‘ACK’ moniker on some of its Gaming M7 motherboards with Wi-Fi, to indicate using a Killer network controller, but not here. 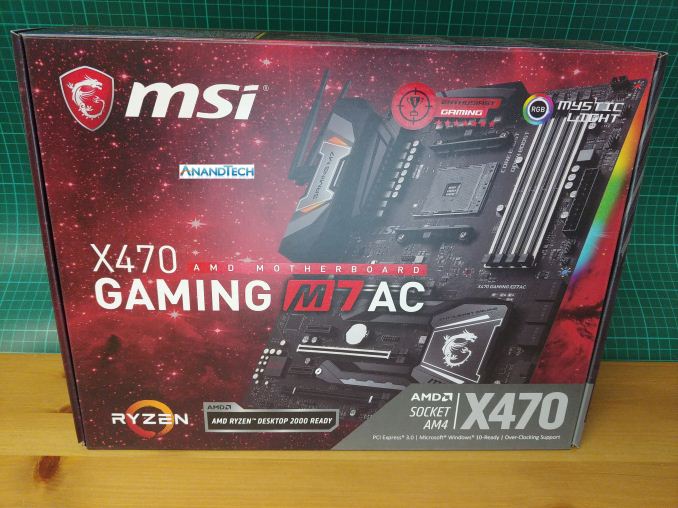 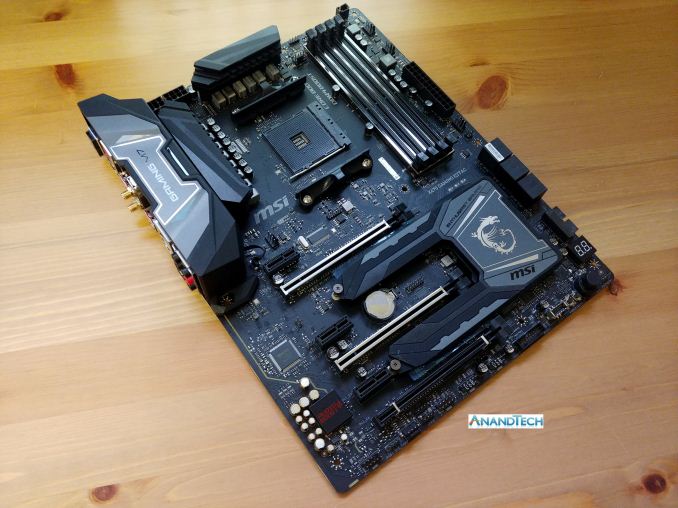 The first look at the board shows something a little less heavy on the styling than the ASUS, although MSI is still pushing a bit of an angled look. The obvious features are the DRAM supports, the multitude of chokes in the power delivery, and that dual-fingered chipset heatsink which hides two M.2 slots. 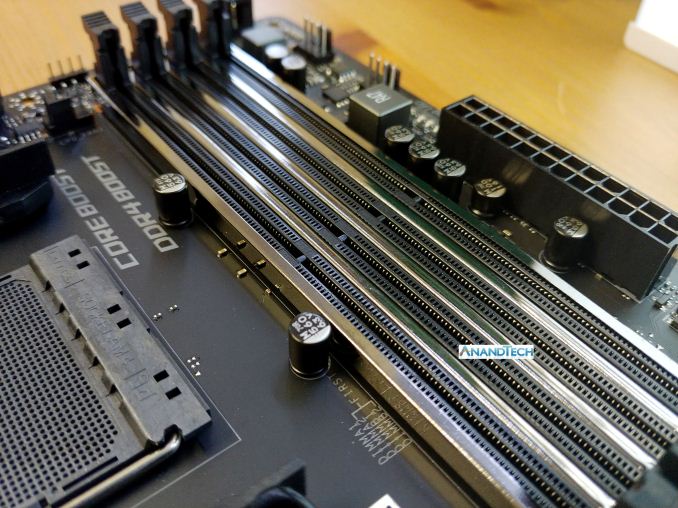 A close up of the DRAM ‘cover’ shows that this is how MSI is evolving its reinforced memory slot concept. We can argue if reinforcing memory slots is actually worth anything (it certainly helps PCIe), but here it can contribute to the aesthetic. 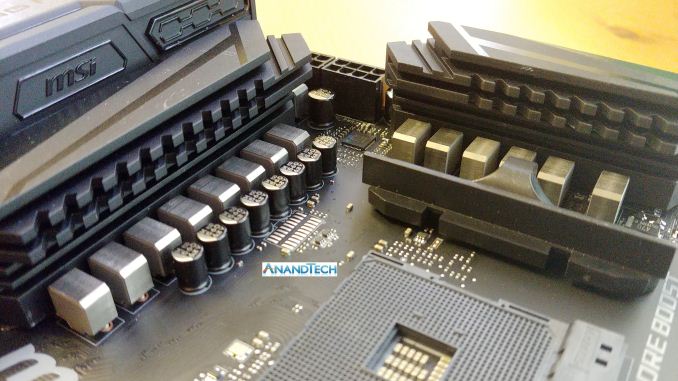 I’m counting 14 chokes on this motherboard, which would make it one of the biggest power delivery options on any AM4 motherboard. The power delivery heatsinks are not connected together, perhaps indicative of cost or MSI’s confidence in the power delivery efficiency. It is worth noting that MSI uses dual 8-pin power for the CPU here, compared to the 8+4-pin arrangement on the ASUS ROG. 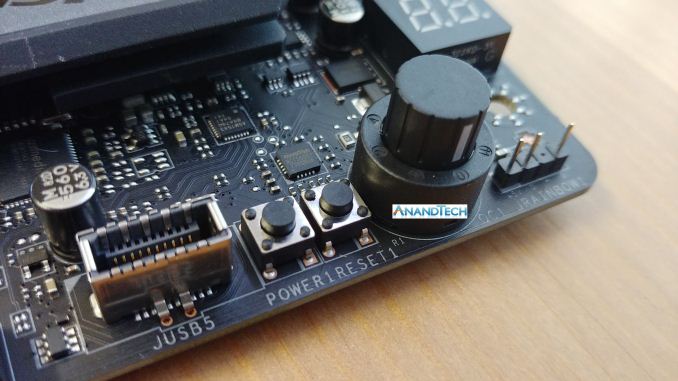 One of the more esoteric features of recent MSI motherboards is this big knob, which goes all the way up to 11. This is MSI’s Game Boost overclocking feature, designed such that each twist gives a bigger overclock boost to the processor. In the past these features are often overly harsh to most processors, in an effort to encapsulate as many as possible, and in the past we’ve never been able to go much beyond the ‘2’ setting on air cooling. Luckily there are power/reset buttons right next to it. 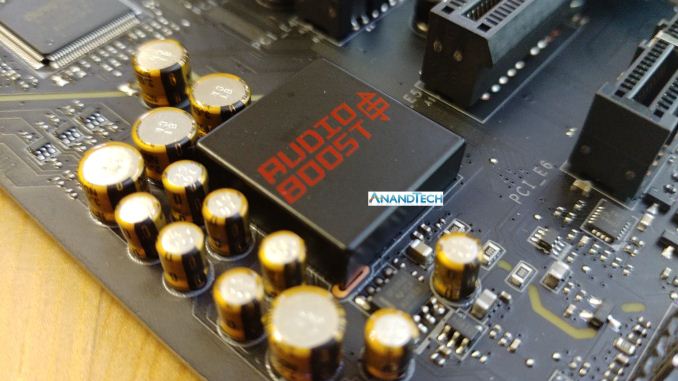 MSI’s Audio Boost 6 branding for the audio is almost like the others: a Realtek ALC1220 codec with specialized audio capacitors, an EMI shield, and PCB separation. MSI’s add here is in the software, using a license from a company called Nahimic to offer various EQ adjustments and in-game benefits.

Like the ASUS, MSI offers a BIOS update feature without the CPU/GPU/DRAM installed. On the rest of the rear panel we get two USB 2.0 ports, a combination PS/2 port, four USB 3.0 ports, the 802.11ac Wi-Fi module, two USB 3.1 ports, the gigabit Ethernet port, and the audio jacks.

A couple of interesting things to note on the rear of the board - around the chipset heatsink area, MSI has placed this warning about keeping case standoffs away from the bottom of the board. Because most cases are designed to house all sorts of motherboard form factors, users that take older cases and do not remove the unneeded standoffs can result in short circuits and possibly ruined hardware. Although if a user doesn’t remove the older standoffs, I doubt they will bother reading the rear of the motherboard.

Here’s a handy addition to some motherboards: this tells you how many PCB layers there are. In this case, six. To put that into context, the cheapest motherboards usually have three or four, most mainstream boards will have six or sometimes eight, while high-end desktop usually require eight or ten. Money-no-object motherboards, like server systems, can have twelve. Additional features, like double copper or high-humidity protection, can add +50% each to the cost of the pure PCB.