CINEBENCH R15 is our benchmark of choice for 3D rendering. It provides three benchmark modes - OpenGL, single threaded and multi-threaded. This benchmark is largely unaffected by the patching. All the recorded numbers are within the margin of expected errors from one run to another.

x264 v5.0 is another benchmark that is unaffected by the Meltdown and Spectre patches.

7-Zip is a very effective and efficient compression program, often beating out OpenCL accelerated commercial programs in benchmarks even while using just the CPU power. 7-Zip has a benchmarking program that provides tons of details regarding the underlying CPU's efficiency. In our benchmark suite, we are interested in the compression and decompression MIPS ratings when utilizing all the available threads. This benchmark also remains unaffected, with the results happening to be within the margin of error from run to run.

Agisoft PhotoScan is a commercial program that converts 2D images into 3D point maps, meshes and textures. The program designers sent us a command line version in order to evaluate the efficiency of various systems that go under our review scanner. The command line version has two benchmark modes, one using the CPU and the other using both the CPU and GPU (via OpenCL). We have been using an old version of the program with 50 photographs in our reviews till now. The updated benchmark (v1.3) now takes around 84 photographs and does four stages of computation:

We record the time taken for each stage. Since various elements of the software are single threaded, others multithreaded, and some use GPUs, it is a very relevant benchmark from a media editing and content creation perspective. 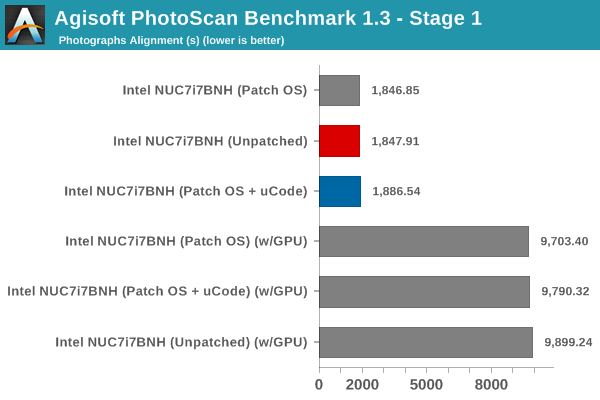 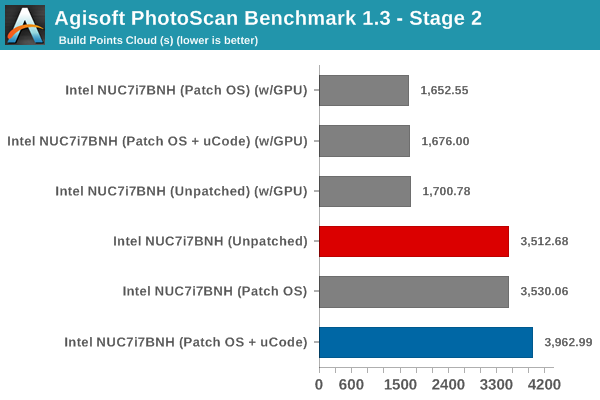 Since this is a real-world benchmark, we can see performance impacts in some of the stages. While the first and last ones do not have any significant deviation, stages 2 and 3 are worse off by around 12.8% and 6.8% respectively in the non-GPU case.

The benchmarks section wraps up with the new Dolphin Emulator (v5) benchmark mode results. This is again a test of the CPU capabilities, but, we don't see much impact on the performance from the patching. The bennchmark consistently took around 325 seconds in all three patching configurations.