We knew from tests last year of Western Digital's SATA drives and the Toshiba XG5 that the SanDisk/Toshiba 64-layer 3D TLC was a huge improvement over their planar NAND, and possibly was even the fastest and most power efficient TLC NAND yet. It is now clear that those drives weren't even making the best possible use of that flash. With Western Digital's new in-house controller, the BiCS 3 TLC really shines. The new WD Black and SanDisk Extreme PRO are unquestionably high-end NVMe SSDs that match the Samsung 960 EVO and sometimes even beat the 960 PRO.

There are very few disappointing results from the WD Black. Even when it isn't tied for first or second place, it performs well above the low-end NVMe drives. The two biggest problems appear to be a poor start to the sequential read test, and another round of NVMe idle power management bugs to puzzle through. Almost all NVMe drives have at least some quirks when it comes to idle power management, in stark contrast to the nearly universal and flawless support among SATA drives for at least the slumber state and usually also DevSleep (which cannot be used on desktops). The power efficiency of the WD Black under load is excellent, so it is clear that the Western Digital NVMe controller isn't inherently a power hog. Whatever incompatibility the WD Black's power management currently has with our testbed won't matter to other desktop users, and hopefully isn't representative of today's notebooks. The bigger surprises from the WD Black are when it performs much better than expected, especially during the mixed sequential I/O test where nothing comes close. 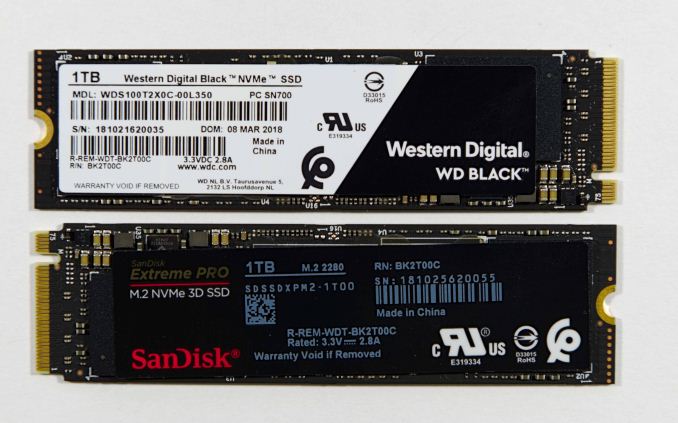 Samsung established an early lead in the NVMe SSD race and has held on to their top spot as many brands have tried and failed to introduce high-end NVMe SSDs with either planar NAND or the lackluster first-generation Intel/Micron 3D NAND. None of those SSDs was a more obvious underachiever than the original WD Black NVMe SSD from last year, which used 15nm planar TLC and could barely outperform a decent SATA drive. The first WD Black SSD didn't deserve Western Digital's high-performance branding. This new WD Black is everything last year's model should have been, and it should be able to stay relevant throughout this year even when Samsung gets around to releasing the successors to the 960 PRO and 960 EVO—which they really need to do soon.

The MSRPs for the WD Black roughly match current street prices for the Samsung 960 EVO, which is exactly what the WD Black should be competing against. Neither drive has a clear overall performance advantage in the 1TB capacity we've analyzed with this review, though the WD Black has a modest power efficiency advantage (our idle power problems notwithstanding). Since release, the Intel 760p has also climbed up to this price range, and it doesn't belong there.

The Plextor M9Pe is finally available for purchase after a paper launch early this year. It uses Toshiba's 64L TLC and a Marvell controller, so it closely represents what this year's WD Black would have been without Western Digital's new in-house controller. We will have preformance results for the M9Pe soon.

Western Digital's long years working to develop 3D NAND and their new NVMe controller have paid off. They're once again a credible contender in the high end space, and their latest SATA SSDs are doing pretty well, too. This year's SSD market now has serious competition in almost every price bracket.