Compared to the earlier VIA P4X400 chipset, PT880 brings VIA completely up-to-date in features for the Pentium 4 platform.


The big news, of course, is support for Dual-Channel memory, but it is also worth mentioning that the PT880 supports up to 8GB of Dual-Channel memory. The 8237 South Bridge has been paired with K8T800 for the last few months, so the contemporary feature-set is familiar. With full support for SATA, SATA RAID, base code for VIA vinyl audio, built-in 10/100 Ethernet LAN, and 8 USB ports, the 8237 competes well with the best from any chipmaker.

VIA calls their new Dual-Channel Memory Controller FastStream64. VIA says that they have used an expanded array of prefetch buffers to reduce latency in the memory controller. They claim that this provides similar performance to Intel's Dual-Channel controller at a lower transistor cost. 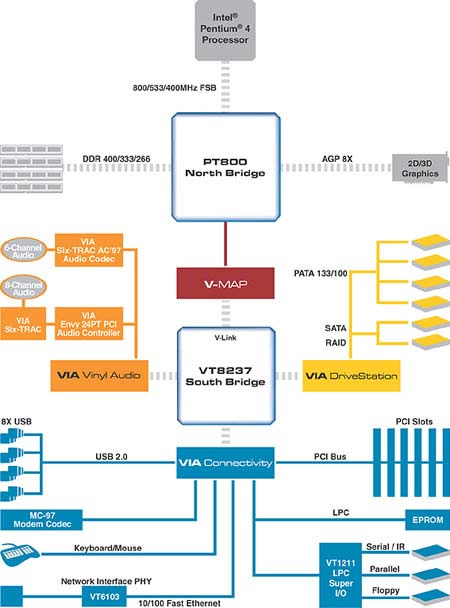 Like the recently introduced SiS 655TX, VIA also fully supports all Socket 478 processors, including the latest Prescott and P4EE. VIA Vinyl audio is supported by the 8237. Codecs can be used by the board maker for either 6-channel AC '97 audio or the very high quality Vinyl Envy 24 audio.