Here are a few quick looks at some demanding full screen applications (except solitaire, which is windowed). All of these screenshots are taken with DVI inputs on the LCDs. We used a Radeon 9800 XT for testing.

The Matrix Reload, The Matrix - We include these movies into our benchmark to test full motion video. As expected, the darks were much better on the 213T, but there was still a washed out blue tone. However, compared to our 2001FP, the 213T image looks like a screenshot. Both images were taken from the same position with the same lighting. Even though the two images are dramatically different, do not put all of your faith in them as digital cameras tend to over-exaggerate visual defects.

Magic the Gathering: Battlegrounds - We picked up a new game since our last benchmark, and in all honesty this is probably one of the better benchmarking games for an LCD; rich colors, fast motion, excessive contrast everywhere (the game is actually kind of fun to play, too). In any case, even though this is an expanded fantasy card game, MTG:B gives us a lot of opportunity to test motion blur due to its high level of activity. Motion blur was essentially non-existent; we did not experience any problems with the LCD keeping up with the rapid color changes on the screen. 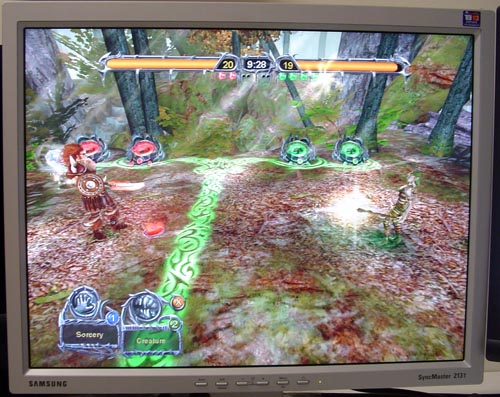 Morrowind - Another solid 1600x1200 game we like to test LCD monitors on. Unfortunately, the sky in the game should not be as blue as it shows in this picture. This is partly due to the camera, but also due to the screen. On our 2001FP the sky is the (correct) grey, but the overall image has a more washed out look to it. 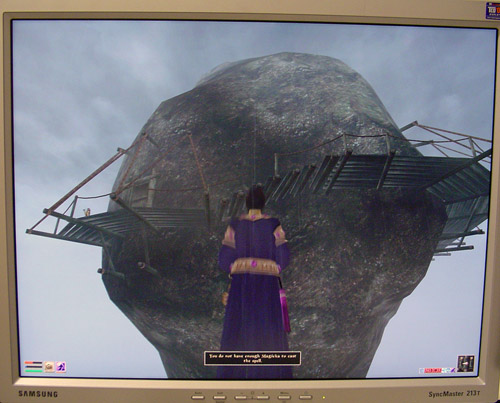 Max Payne 2 - Again one of our favorite games to benchmark LCDs because we get such different results each time we change LCDs. There is a slight blue hue to everything even though we have already calibrated our monitor with the OptiCal software. Even though there are some discrepancies in the color, the contrast levels are very good; unlike many other LCDs dark objects on dark backgrounds were difficult to distinguish. This is the desired effect in many games. 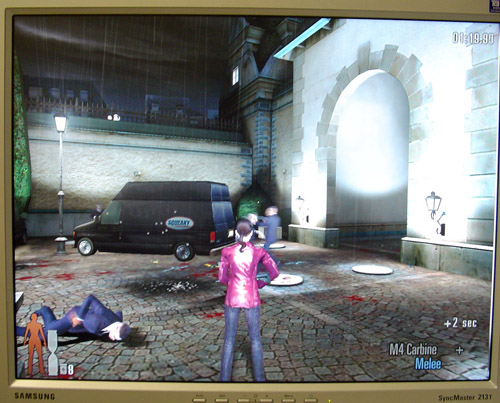 Halo - Halo gave our 2001FP a little bit of trouble. While we did notice motion blur, the camera over emphasized the issue due to the shutter rate. For avid gamers there is a noticeable difference between the 213T and the 2001FP, but it is difficult to distinguish. The 213T cannot keep up with the 2001FP; particularly with the constant light to dark imagery (rapid explosions in dark corridors). 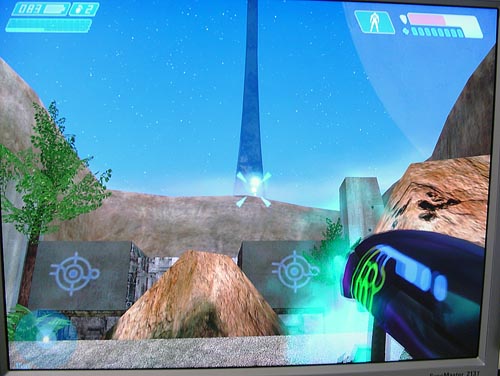 Solitaire - For some reason, everyone enjoys our Solitaire benchmark. Indeed, with all that mind bending, card flipping excitement, its no wonder the most played PC game in history deserves its own benchmark.

Unlike our other images, do not confuse these image defects with the defects in the other pictures. The "two" mouse cursors are normal; we are catching two separate frames in the same image due to the cameras shutter rate. What is not normal is the blurring along the edges of the cursor. You can clearly see how the 2001FP has a crisper cursor; the SIPS panel is more capable for this type of imagery.