So far, we've only scratched the surface of the Intel SSD DC P4510 and Intel's VROC solution for NVMe RAID. We've been able to verify only the most basic specifications for the drives, but most of the initial results match up with our expectations.  The 8TB Intel SSD DC P4510 offers some substantial performance increases over the 2TB model, and the aggregate capacity and performance it enables from a single server is impressive. Once we get the necessary adapter to measure power consumption of U.2 drives with our Quarch XLC Programmable Power Module, we will begin a deeper analysis of the P4510 on a single-drive basis, comparing it against competing enterprise NVMe SSDs. It is already clear that Intel has made significant generational performance improvements, but the purported efficiency improvements will be at least as tantalizing to datacenter customers. The 16W rated power draw of the 8TB P4510 sounds pretty good in comparison to the 20.5W draw of a 4TB P4500, or the 12W of a 2TB P3520. 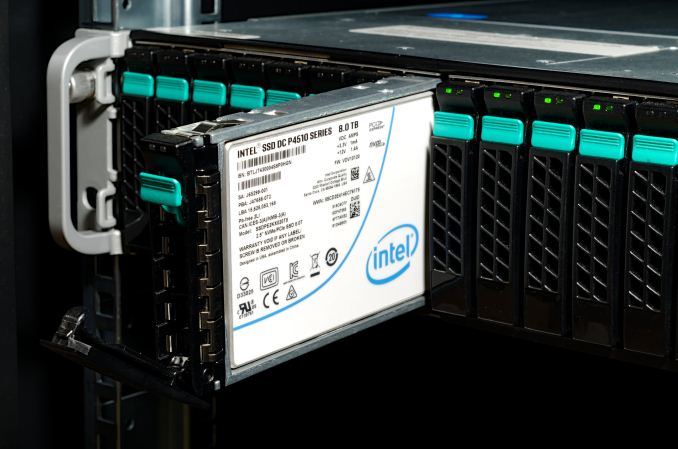 Intel's Virtual RAID On CPU (VROC) solution for NVMe RAID has very particular requirements for its use, but once all the pieces are in place, its use is straightforward. The experience using VROC on Linux has been fairly smooth so far, but we have not yet attempted to install an operating system to a VROC array. The RAID-0 and RAID-10 performance we've observed shows excellent scalability to 11.6GB/s sequential reads and over 2M random read IOPS from four drives, with no effort on our part to fine-tune the system for maximum performance. At the moment, we are testing RAID-5 performance and the CPU usage of the parity calculations involved in writing to RAID-5 arrays. At the speed of four NVMe drives like the P4510, this overhead is significant and requires multiple CPU cores, but it is unavoidable: there are no hardware RAID solutions for NVMe drives that can keep up with an array of four P4510s.