The Intel NUC6CAYH is actively cooled, but the fan curves are quite good. We were barely able to hear the fans at a distance of 6 ft. While not being as good as fanless unit with respect to acoustics, the NUC6CAYH fits the bill for a secondary / bedroom HTPC.

Starting with Haswell, Intel, AMD and NVIDIA have been on par with respect to display refresh rate accuracy. The most important refresh rate for videophiles is obviously 23.976 Hz (the 23 Hz setting). As expected, the Intel NUC6CAYH has no trouble with refreshing the display appropriately in this setting. 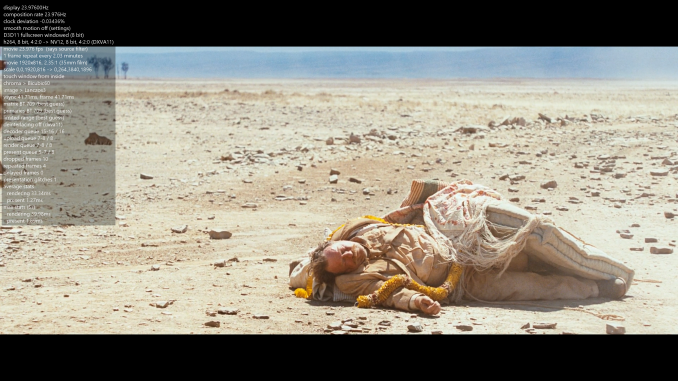 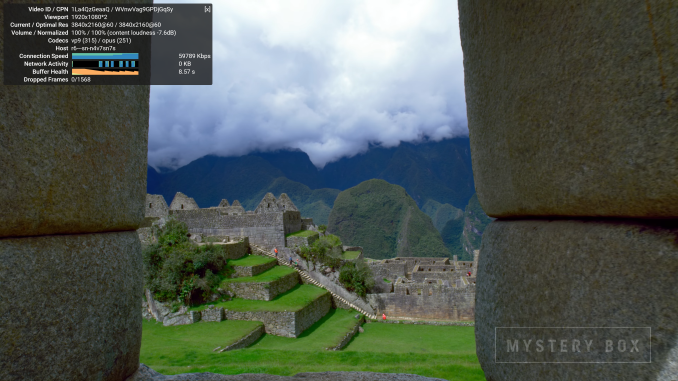 The YouTube streaming test played back the 4K non-HDR version (VP9 video and Opus audio), while the Netflix one delivered the 1080p 5.8 Mbps AVC version. 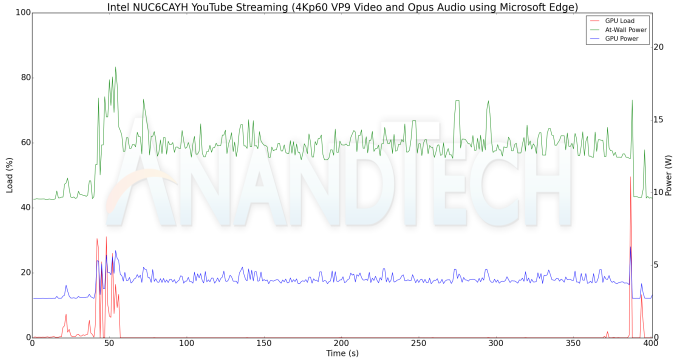 A similar graph for the Netflix streaming case is also presented below. Manual stream selection is available (Ctrl-Alt-Shift-S) and debug information / statistics can also be viewed (Ctrl-Alt-Shift-D). Statistics collected for the YouTube streaming experiment were also collected here. Despite the availability of a 4K display and HCP 2.2 support, I couldn't get Netflix to play back the 4K version of the title, even though the Apollo Lake NUC is supposed to be able to do it. On a hunch, I went back from the Fall Creators Update to the much older Anniversary Edition. That time around, I got the ULTRA HD 4K tag on the title, but, the playback was still that of the 1080p version 1080p, with the 4K stream option not visible at all. 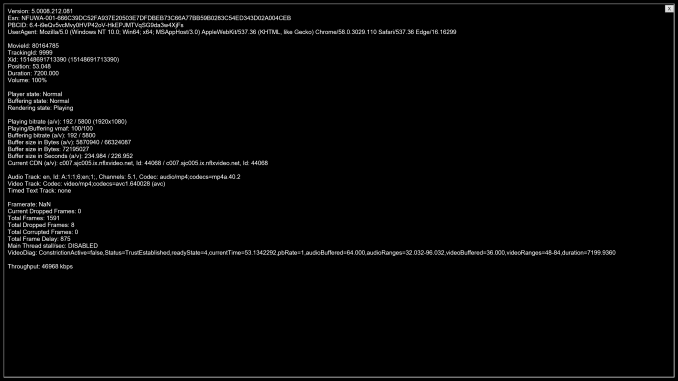 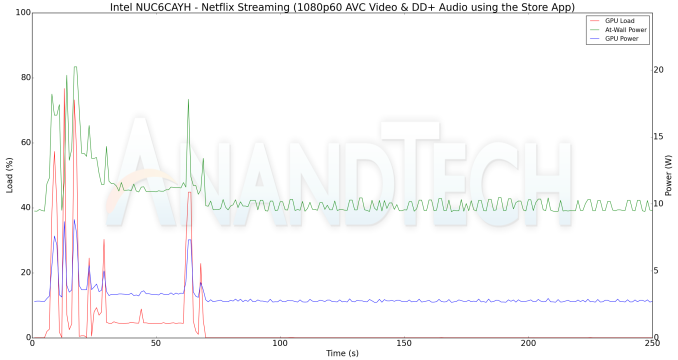 It must be noted that the debug OSD is kept on till the stream reaches the 5.8 Mbps playback stage around 1.5 minutes after the start of the streaming. Toggling the state of the debug OSD results in variation in the at-wall power consumption (as much as 3W) and GPU loading parameters. In the steady state, we find that the at-wall and GPU power numbers are around 10W and 2.7W respectively.

In order to evaluate local file playback, we concentrate on Kodi and MPC-HC with EVR for the two systems. The integrated GPUs are too weak to handle madVR. We recently revamped our decode and rendering test suite, as described in our 2017 HTPC components guide. For the purpose of testing, we utilized Kodi 17.6, MPC-HC x64 1.7.13, and LAV Filters 0.70.1-83. The video decoder was set to native DXVA2 mode. 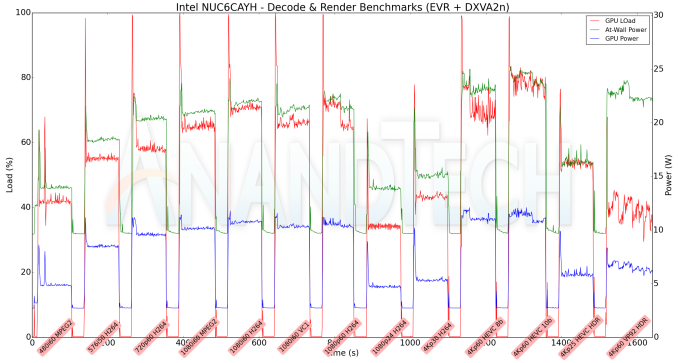 Playing back the SD and 1080p streams at 4K requires scaling, and that shows in the power numbers of the above graph. One point to note is that Apollo Lake does not support VP9 Profile 2 decoding, and the playback of the final stream in the above test suite was essentially a slideshow.

We see similar behavior with Kodi 17.6, as shown in the graph below. 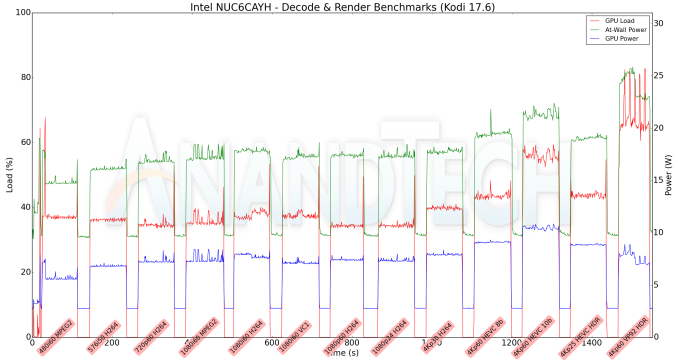 Kodi turned out to be much better than MPC-HC, and we were happy to note that all streams except the VP9 Profile 2 one played back without any frame drops or stutters. 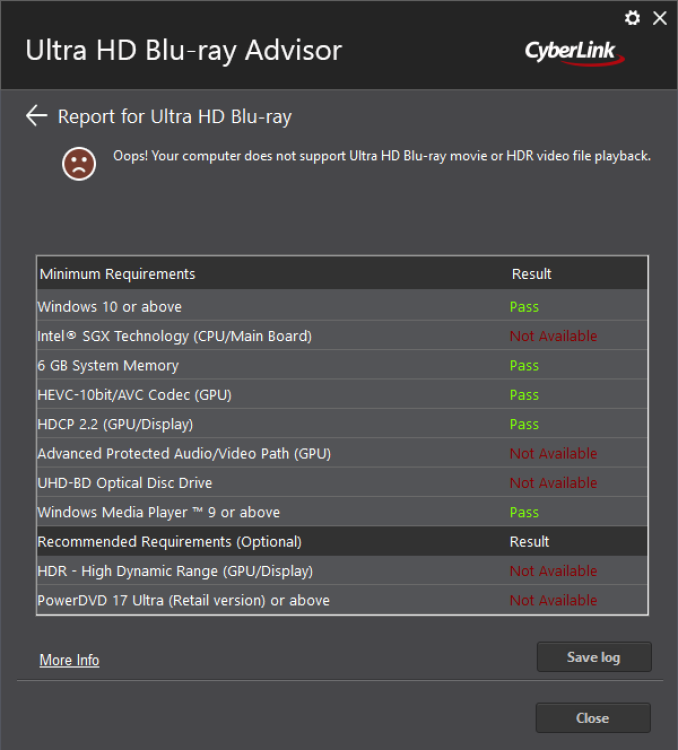 Finally, it must be noted that the GPU inside the Apollo Lake SoC does not support UHD Blu-ray playback despite the presence of a HDCP 2.2 HDMI 2.0 port. The SoC does not have SGX capabilities either.