In the second half of last year, AMD’s Enterprise, Embedded and Semi-Custom division (now the Enterprise and Embedded division) launched its Ryzen PRO family of desktop processors, for business customers that needed additional management capabilities. AMD has been making ‘Pro’ versions of its consumer processors for several generations now, usually mimicking the specifications of the consumer products aside from the management support.

These products, by and large, go up against Intel’s equivalent vPro processors, and AMD’s value add revolves around support for DASH, an open-source management protocol, TSME (transparent secure memory encryption), and its commitment to customer requests such as operating system image stability (18-months), guaranteed processor availability (24-months), manufacturing specifications designed for long-term reliability, and a commercial limited warranty (36-months). AMD also likes to tout that it offers a Pro product at the lower end of the market, where Intel does not have a vPro-enabled Core i3.

As part of the AMD Tech Day, it was announced that the Ryzen PRO Mobile family will be launched in Spring 2018. These components are, by and large, the Ryzen Mobile family of processors with Vega graphics but with the added Pro features listed above. For performance and power, AMD states similar sorts of numbers as it did with the launch of Ryzen Mobile: up to 270% better performance per watt, targeting 13 hours of useful battery life, 9 hours of HD video playback, and targeting a generation of sleek and powerful laptops, in this case focused for the Enterprise market. 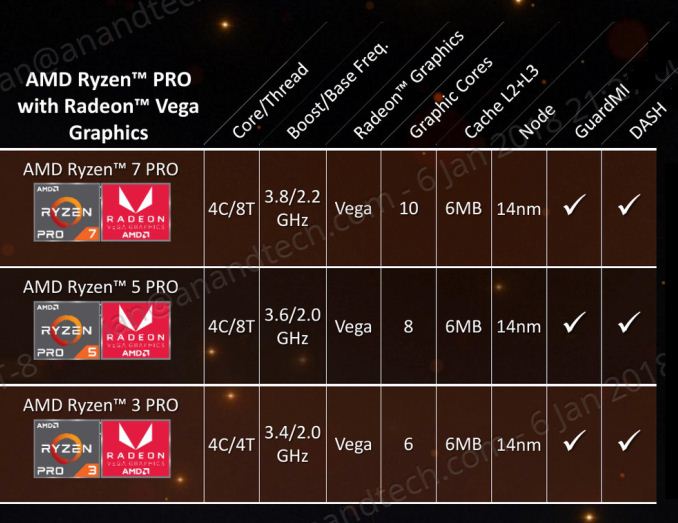 We are likely to see OEMs that currently provide AMD A-Series PRO notebooks to offer updated versions with these new processors, as well as a series of new designs coming into the business and enterprise market.