Finally, let's talk about power, temperature, and noise. At a high level, the Titan V should not be substantially different from other high-end NVIDIA cards. It has the same 250W TDP, and the cooler is nearly identical to NVIDIA’s other vapor chamber cooler designs. In short, NVIDIA has carved out a specific niche on power consumption that the Titan V should fall nicely into.

Unfortunately, no utilities seem to be reporting voltage or HBM temperature of Titan V at this time. These would be particularly of interest considering that Volta is fabbed on TSMC's bespoke 12FFN as opposed to 16nm FinFET. This also marks the first time NVIDIA has implemented HBM2 in gaming use-cases, where HBM temperatures or voltages could be elucidating.

Interestingly, LuxMark only brings Titan V to 1355MHz instead of its maximum boost clock, a behavior that differs from every other card we've benched in recent memory. Other compute and gaming tasks do bring the clocks higher, with a reported peak of 1785MHz.

The other takeaway is that Titan V is consistently outclocked by Titan Xp. In terms of gaming, Volta's performance gains do not seem to be coming from clockspeed improvements, unlike the bulk of Pascal's performance improvement over Maxwell.

Meanwhile it's worth noting that the HBM2 memory on the Titan V has only one observed clock state: 850MHz. This never deviates, even during FurMark as well as extended compute or gameplay. For the other consumer/prosumer graphics cards with HBM2, AMD's Vega cards downclock HBM2 in high temperature situations like FurMark, and also features a low-power 167MHz idle state. 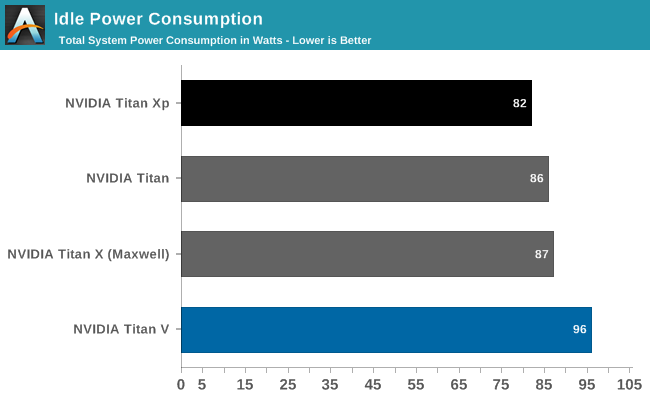 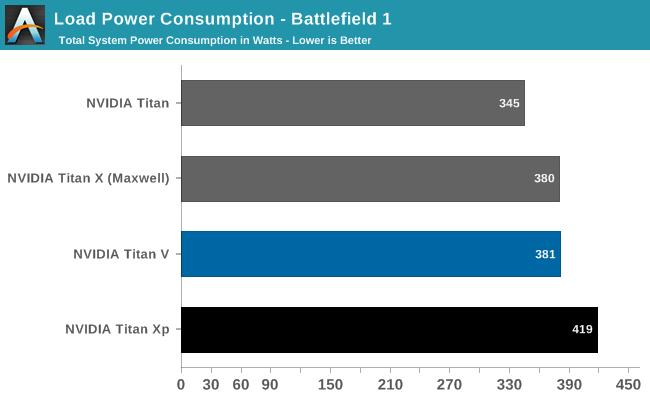 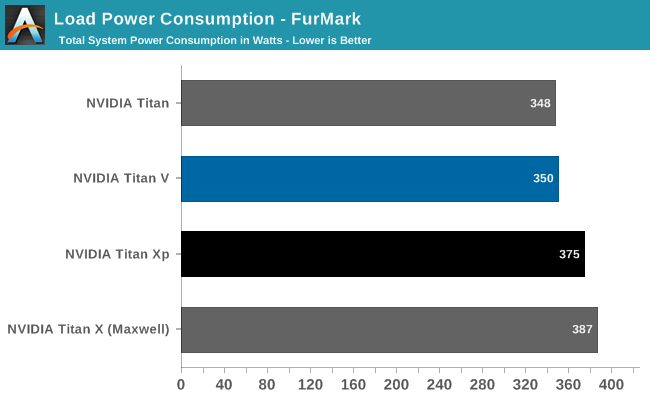 Meanwhile under load, the Titan V's power consumption at the wall is slightly but consistently lower than the Titan Xp's. Again despite the fact that both cards have the same TDPs, and NVIDIA's figures tend to be pretty consistent here since Maxwell implemented better power management. 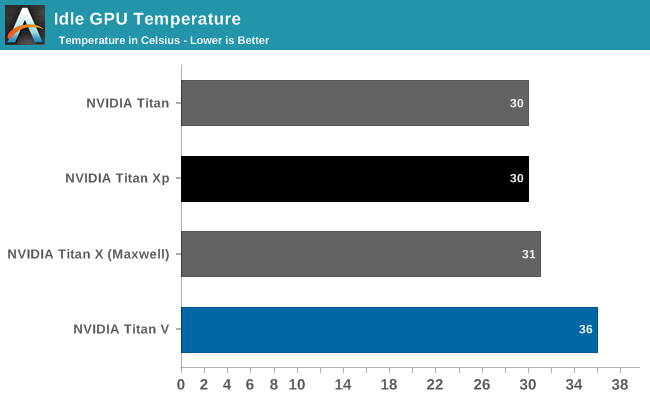 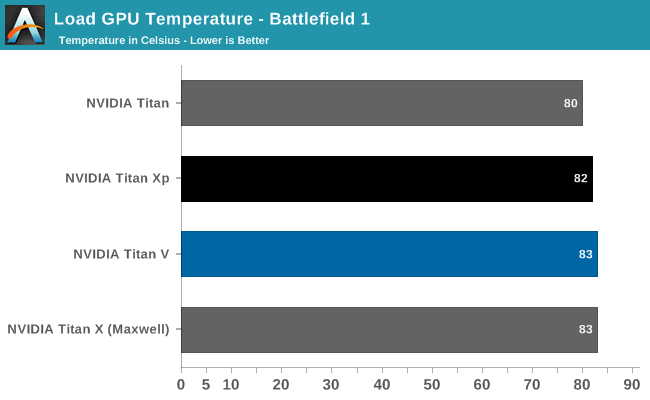 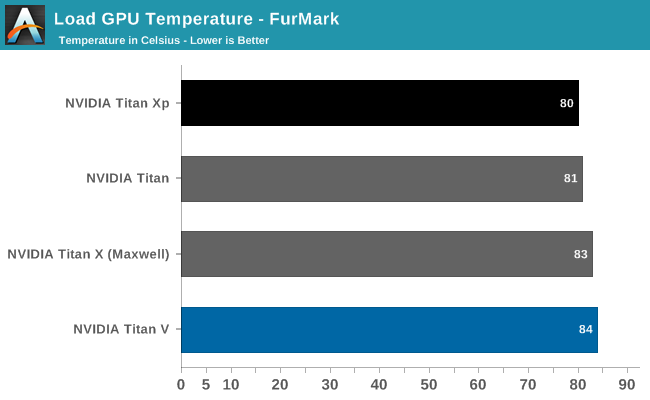 During the course of benchmarking, GPU-Z reported a significant amount of Titan V thermal throttling, and that continued in Battlefield 1, where it oscillated between being capped out by GPU underutilization and temperature. And in FurMark, the Titan V was consistently temperature-limited.

Without HBM2 voltages, it is hard to say if the constant 850MHz clocks are related to Titan V's higher idle system draw. 815mm2 is quite large, but then again elements like Volta's tensor cores are not being utilized in gaming. In Battlefield 1, system power draw is actually lower than Titan Xp but GPU Z would suggest that thermal limits are the cause. Typically what we've seen with other NVIDIA 250W TDP cards is that they hit their TDP limits more often than they hit their temperature limits. So this is an unusual development. 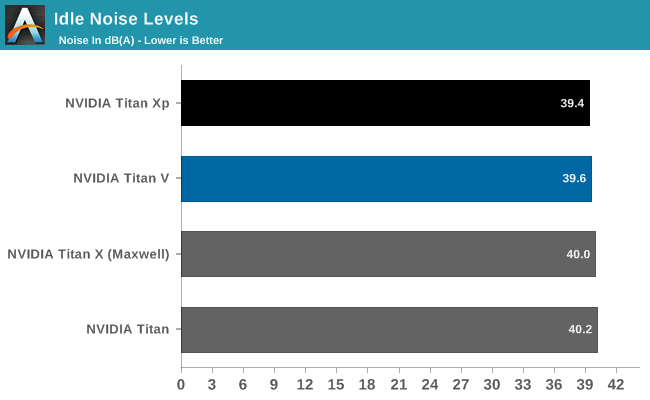 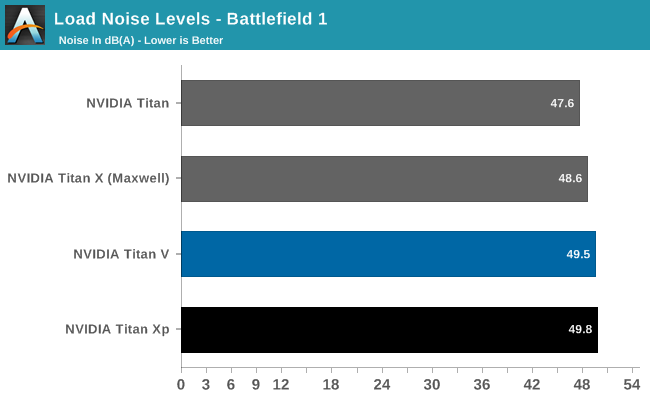 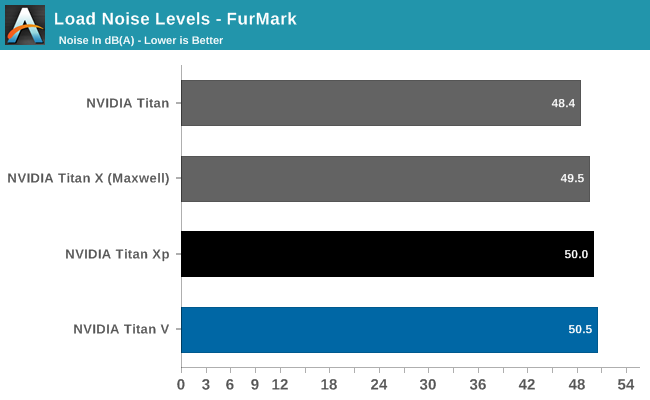