In the most recent version of its cross-platform Geekbench benchmark suite, Primate Labs added CUDA and OpenCL GPU benchmarks. This isn’t normally a test we turn to for GPUs, but for the Titan V launch it offers us another perspective on performance. 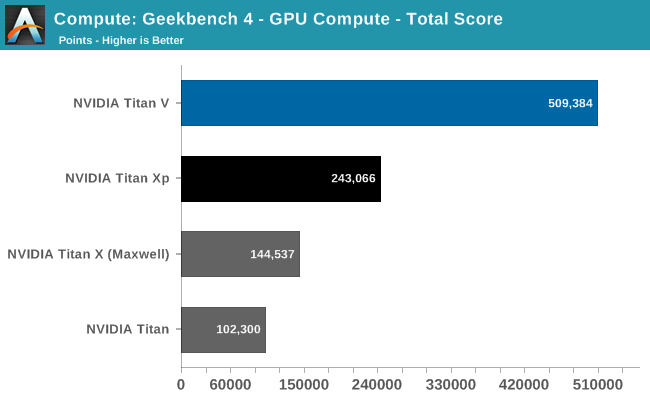 The results here are interesting. We’re not the only site to run Geekbench 4, and I’ve seen other sites with much different scores. But as we haven’t used this benchmark in great depth before, I’m hesitant to read too much into it. What it does show us, at any rate, is that the Titan V is well ahead of the Titan Xp here,  more than doubling the latter’s score.

Looking at the subscores, the Titan V handily outperforms the Titan Xp on all of the subtests. However it’s one test in particular that stands out here, and is likely responsible for the huge jump in the overall score, and that’s the Gaussian Blur, where the Titan V is 9x (!) faster than the Titan Xp. I am honestly not convinced that this isn’t a driver or benchmark bug of some sort, but it may very well be that Primate Labs has hit on a specific workload or scenario that sees some rather extreme benefits from the Volta architecture.

Up next we have the official Folding @ Home benchmark. Folding @ Home is the popular Stanford-backed research and distributed computing initiative that has work distributed to millions of volunteer computers over the internet, each of which is responsible for a tiny slice of a protein folding simulation. FAHBench can test both single precision and double precision floating point performance, giving us a good opportunity to let Titan V flex its FP64 muscles. 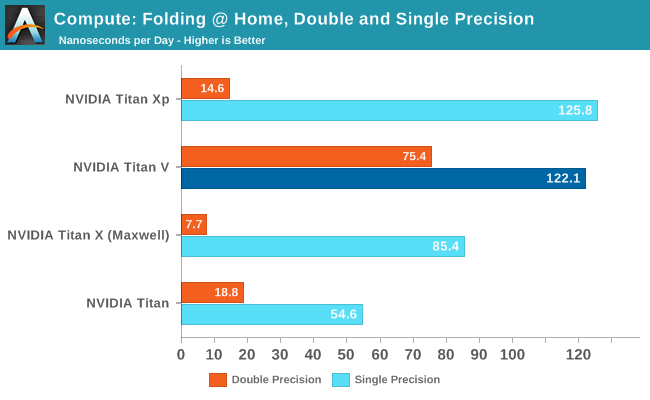 A CUDA-backed benchmark, this is the first sign that Titan V’s performance lead over the Titan Xp won’t be consistent. And more specifically that existing software and possibly even NVIDIA’s drivers aren’t well-tuned to take advantage of the Volta architecture just yet.

In this case the Titan V actually loses to the Titan Xp ever so slightly. The scores are close enough that this is within the usual 3% margin of error, which is to say that it’s a wash overall. But it goes to show that Titan V isn’t going to be an immediate win everywhere for existing software. 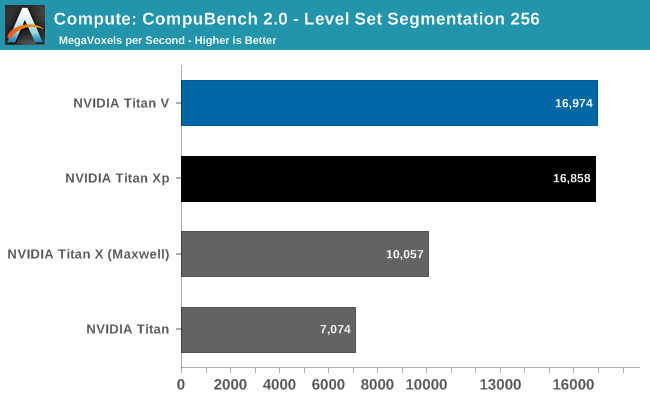 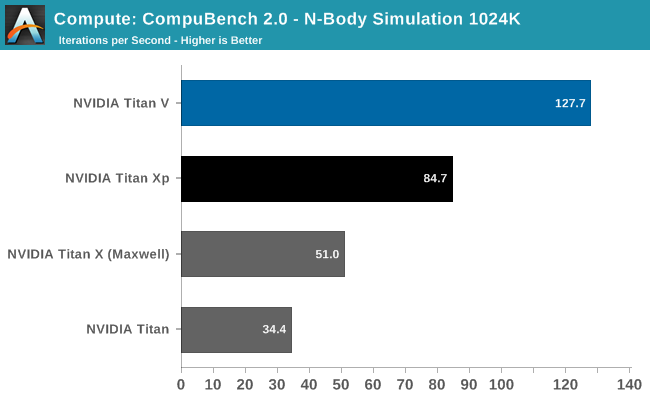 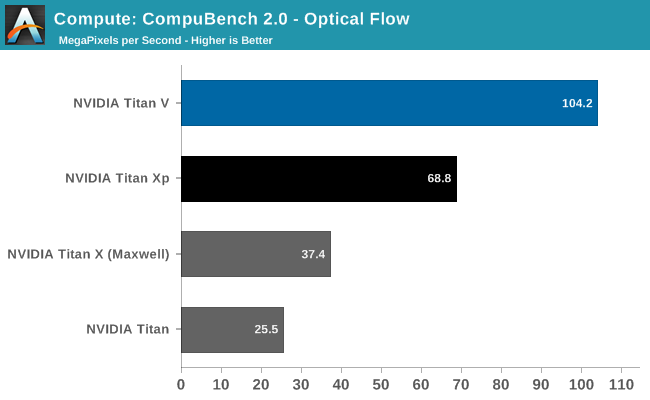 It’s interesting how the results here are all over the place. The Titan V shows a massive performance improvement in both N-Body simulations and Optical Flow, once again leading to the Titan V punching well above its weight. But then the Level Set Segmentation benchmark is practically tied with the Titan Xp. Suffice it to say that this puts the Titan V in a great light, and conversely makes one wonder how the Titan Xp was (apparently) so inefficient. The flip side is that it’s going to be a while until we fully understand why certain workloads seem to benefit more from Volta than other workloads.