Like all Surface devices for the past several years, Microsoft uses the Marvell AVASTAR network card in the Surface Book 2. It offers 2x2:2 802.11ac support, with Bluetooth 4.1. The network adapter has a checkered past, with reliability and speed issues, but over time, the reliability has improved a lot, and the speed is much better than it used to be. 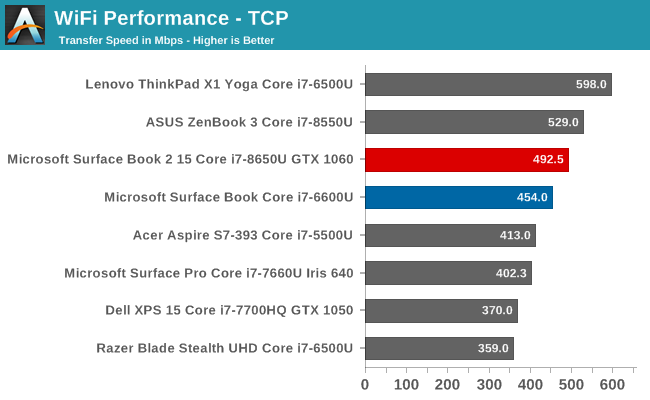 The sequential transfer speeds are now quite strong on the Marvell network card. They still can’t match the best Intel solutions in terms of speed, and the Intel cards also offer MU-MIMO support, but the AVASTAR has turned the corner in terms of speed and reliability enough where it’s not a knock against Surface like it used to be. That being said, we’re at a point where it seems like only Intel is continually updating their wireless NIC hardware.

Much like the new Surface Pro, the speakers on the new Surface Book 2 have improved in sound quality, offering stronger mid-range and bass levels than before. They sound remarkably good, for a notebook. The speakers are located in the display and are front firing, which likely helps with the sound as well. They don’t get overly loud, at around 74-75 dB(A) on our test track, but with the better sound quality that’s a good trade-off. 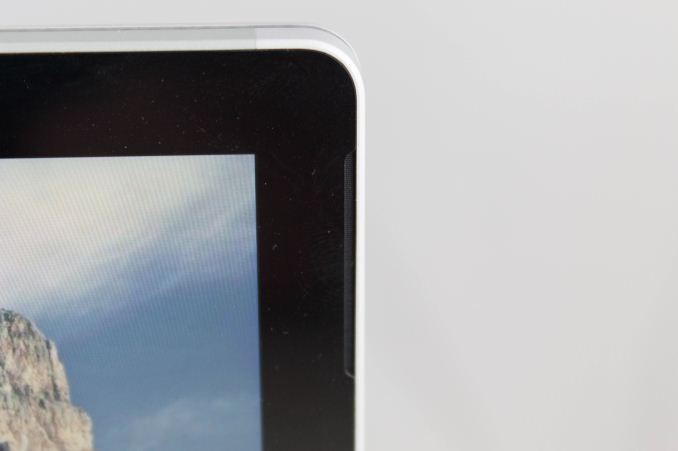 If you’re after better sound, you still have to rely on external speakers or headphones though. Laptops just don’t offer the space required for quality speakers.

Thanks to the unique design where the CPU and required components live in the detachable tablet, and the discrete GPU lives in the base, the Surface Book design offers more cooling capability than a traditional notebook would, since the thermal zones are split up. It can also help with noise, thanks to not needing the fans to run as much to cool both the CPU and GPU, and the fan speeds can be independent. 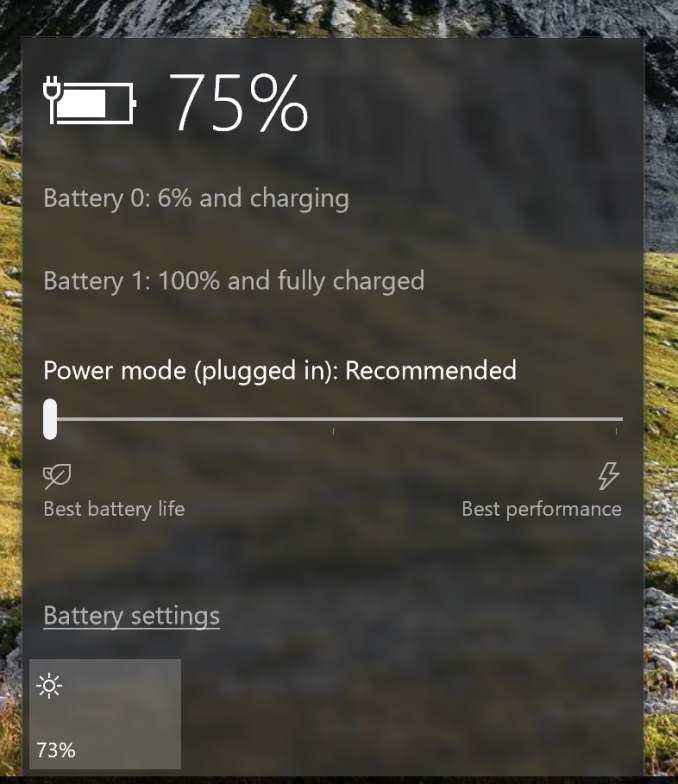 Microsoft has also carried forward their power management slider which was introduced with the latest Surface Pro. The slider lets the end user choose between best battery life, which is the default, better performance, and best performance. If you’re running on battery power, the slider adds another notch to the far right to let you access Battery Saver mode as well. The slider adjusts to PL1 and PL2 states of the CPU, capping the maximum power draw, especially for burst workloads. Arguably the biggest advantage for this for the user is that in the default mode, the system fan is almost never activated unless the system is doing a long task which requires a lot of CPU performance. Unlike Surface devices from a couple of years ago, in the default mode you don’t get the random fan events, which could be somewhat annoying.

There’s a lot of power under the hood of the Surface Book 2 to keep cool as well. The Core i7-8650U is a 15-Watt TDP processor, but in short bursts of work, it can easily use 30 Watts, until it settles down on a 15-Watt level for longer tasks. The GTX 1060 has no official TDP numbers from NVIDIA, and that’s so that manufacturers can tune the level to what works in their system, but it is likely somewhere around 80 Watts or so. If you add those up, and then factor in the extra power draw from the display, storage, RAM, and other factors, you can see that we’re right at the limit of the 100-Watt AC adapter as well.

To take a look at the system performance under load, Rise of the Tomb Raider was run at our Enthusiast settings (1080p Very High) for 75 minutes or so. 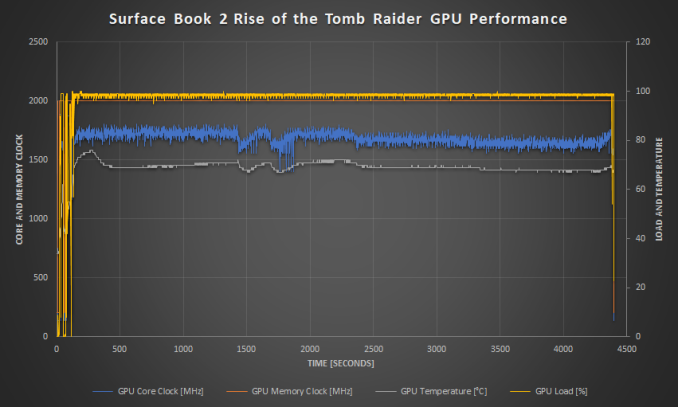 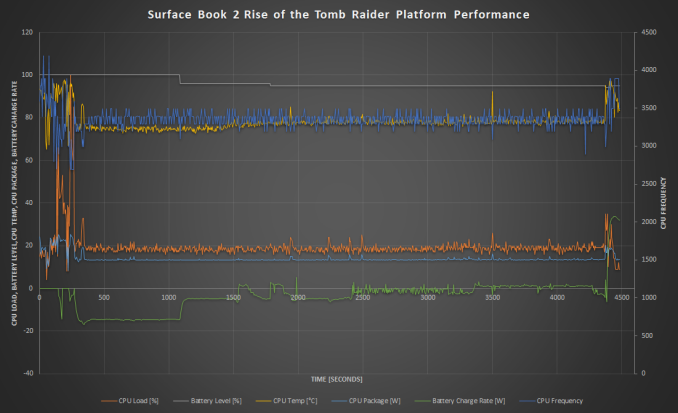 Zeroing in on the GPU log first, you can see that the GPU temperature never gets very warm, with the temperature staying right around the 70°C mark for most of the test, but the core clock does dip a bit. The reason for that can be found in the second chart, which shows the CPU performance, as well as the battery charge rate.

The 100-Watt AC adapter included with the Surface Book 2 is not quite powerful enough to keep the system fully charged under a high load such as this, so you can see there is some power draw from the battery (the green line in the chart) which is leveraged to make up the difference. Over time, the battery drops to about 95% charge, at which time the system drops the GPU clock a bit to prevent draining the battery any further. Not all games are going to run into this issue, but certain games will require more power from the GPU and CPU than the power input can handle. However, the battery will never completely be drained, as the system doesn’t let it get out of control.

In an ideal world, this wouldn’t happen. Gaming laptops use large diameter barrel plugs with high-wattage AC adapters to prevent this exact issue, but it’s clear that Microsoft is bumping into the maximum power that they can put through the Surface Connect port, which first debuted on the Surface Pro 3. At the time, they likely didn’t ever see them needing more than 100 Watts, but now they do, so their only option would be to either redesign the Surface Connect port, which may limit compatibility with existing devices, or move to a new design, which certainly would limit compatibility, so instead they’ve allowed the battery to be used as a backup for short bursts, and then tick down the performance slightly to prevent it happening further. The only battery that gets drained is the one in the base, which makes sense since it’s the GPU that’s drawing all of this power. 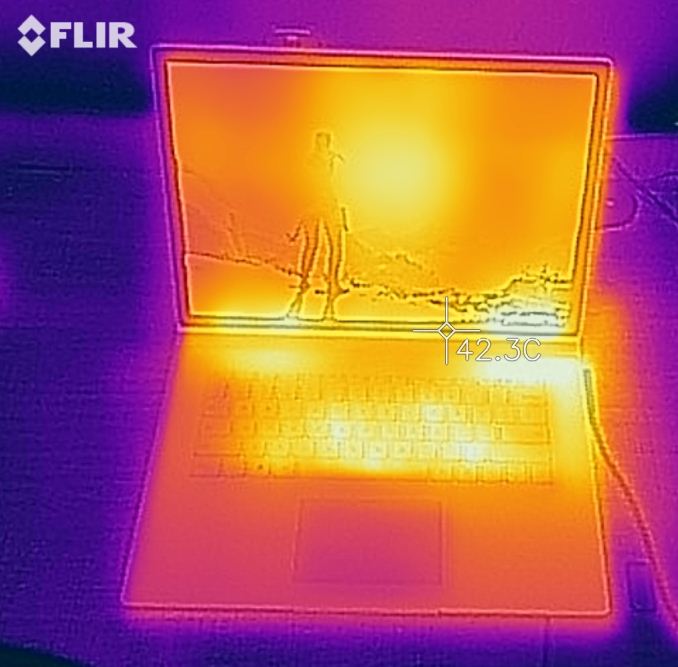 As for device temperatures, we’ve used the FLIR camera to capture the thermal image of the device right at the end of the test run above. The chassis gets to about 43°C at the hottest point, which is warm but not distracting.

The system fans, under this kind of heavy load, do get fairly loud though. At full load, the maximum fan noise measured was around 53 dB(A) measured an inch over the trackpad. It’s not as loud as some gaming laptops, but this kind of sound level would likely require the user to use headphones if gaming. Luckily, under most light workloads, the fans don’t come on at all, so the system is generally silent under those conditions. 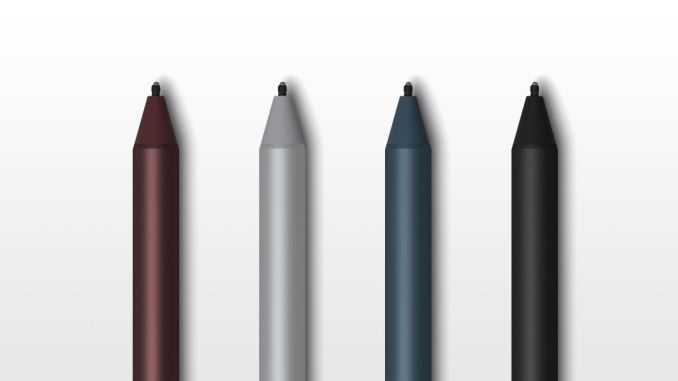 The new pen, if you need a stylus, is quite capable, and Windows has been adding features to their Windows Inking experience for some time. The text input has gotten a lot better, for instance, but it’s also easier to discover apps for Inking, and launch your favorites now. 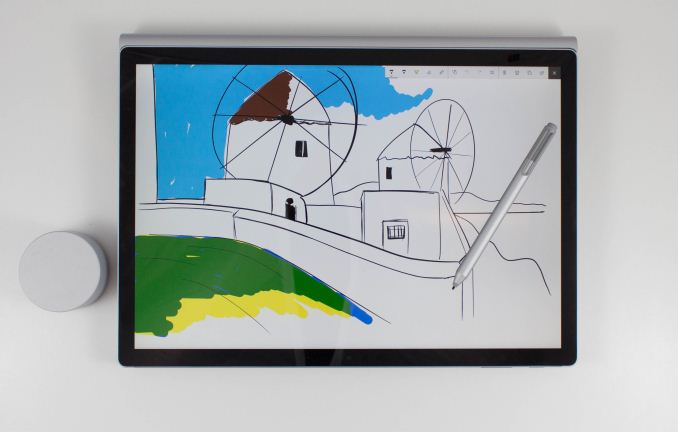 Unlike the Surface Pro, there’s no solid kickstand to hold the display from wobbling when inking, so really the best option is to detach the display, flip it around, and then attach it again, which gives you the same sort of easel mode that Microsoft offers on their other products. The advantage to this over just detaching the tablet is that you get to keep access to the GPU and larger battery as well.

I think the pen isn’t as important on a device like this as it would be on a smaller tablet like the Surface Pro, but the full capabilities of it are available if necessary.

Launching alongside the Surface Book was a new Microsoft Precision Mouse, which is much more ergonomic than the Surface Mouse that ships with the Surface Studio, as an example. It offers the ability to pair it with up to three devices at a time, as well as the same sort of toggle on the scroll wheel as seen in Logitech mice, where you have a notched scroll for precision, and a freewheeling scroll for faster scrolling. That’s a welcome feature, and one that is quickly missed if you are used to it from Logitech mice. 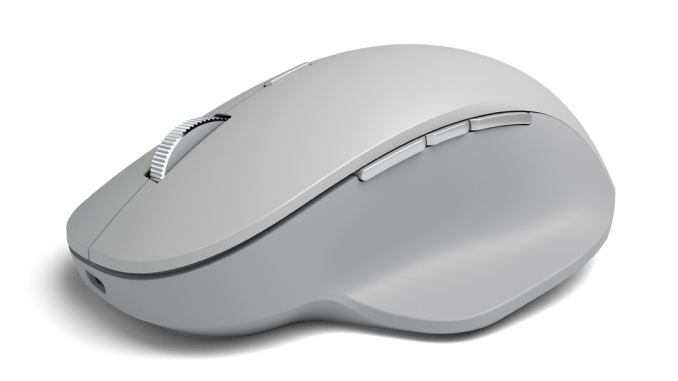 Overall, the feel of the mouse is nice, but mice are a very personal decision, and the shape of the Precision Mouse was far better than the Surface Mouse, but still not what I am used to with my favorite mouse. If you want one that matches the color of a Surface, be sure to check it out though.