Given the price of the ASUS ROG Strix X299-XE Gaming, it seems to be targeted as a 'mid-range+' board for an enthusiast level gamer. The enthusiast gamer tends to take things a more serious than a casual gamer and can spend a bit more on high-end parts. These users will pass the blurred lines of HEDT platform and the mainstream, often skipping the Kaby Lake processors built for the X299 platform. Instead of paying $350 or less for a 7740K or 7640X, they go straight in for a higher core count CPU such as the six-core i7-7800X ($389) or an eight-core i7-7820X ($599). With this, there are more PCIe lanes to use and it opens up the platform for multi-GPU capabilities and more freedom for M.2 based devices. The XE version of this board over the non-XE version simply adds a larger and slightly different styled heatsink as well as including a 40mm fan and a mounting bracket to the updated heatsink. No other changes between the two were made. 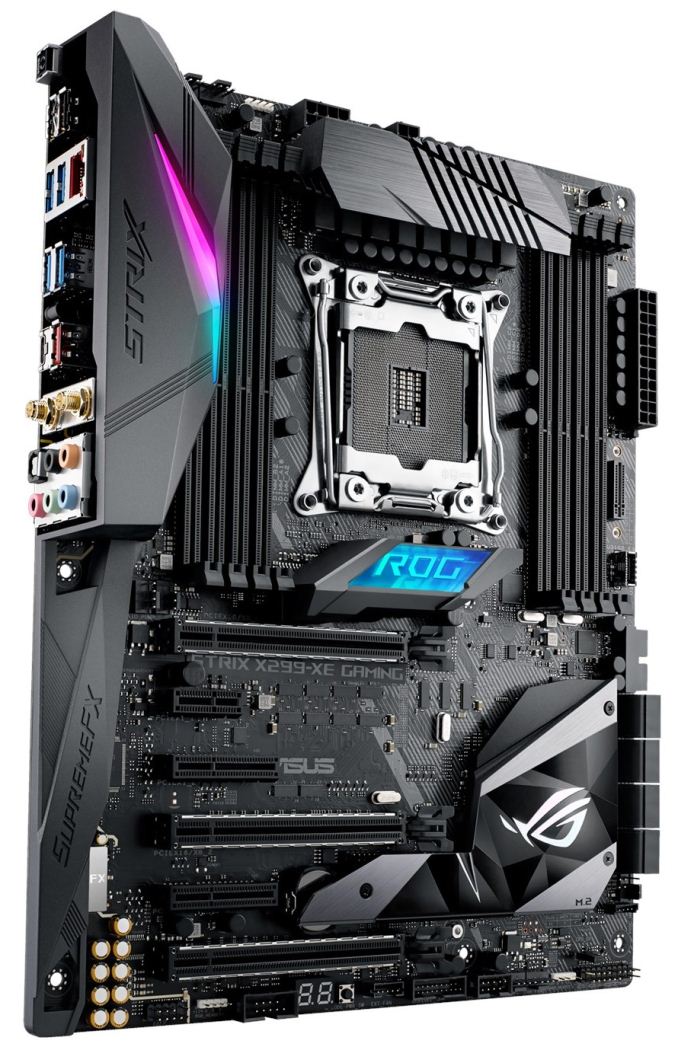 The ROG Strix X299-XE Gaming has most of the bells and whistles that we expect as default on the X299 platform. USB 3.1 (10 Gbps) duties are handled by the ASMedia 3142 controller which uses a bit less power and offers better performance than the 2142 controller seen in Z270 boards. It has a single wired LAN controller in the I219-V, a proven performer, to which ASUS also offers ESD protection and traffic management for prioritizing streams to optimize performance in online games. Control over the 8-phase VRM is handled by a well regarded IR (now Infineon) IR35201 8-channel controller ensuring accurate voltage is delivered to the processor. 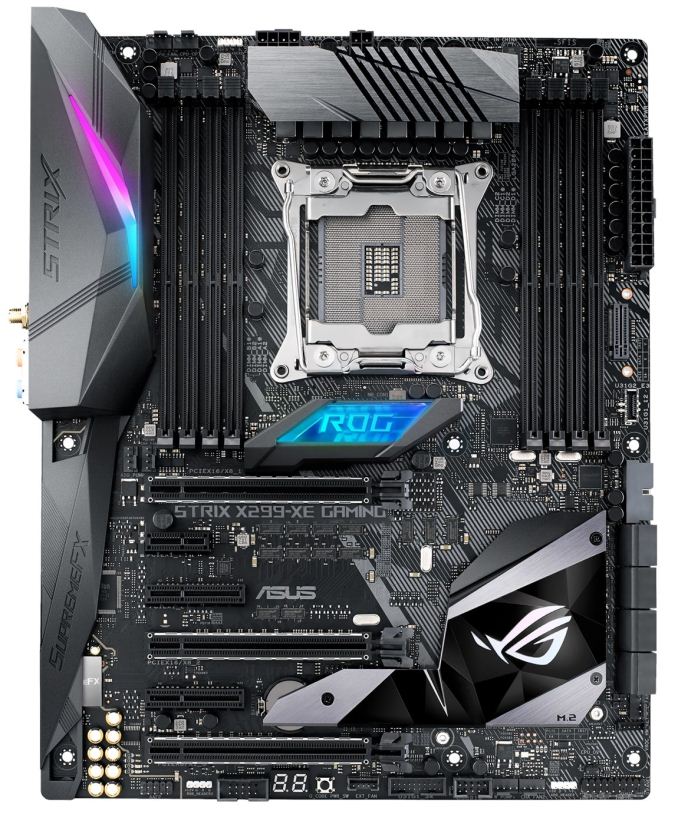 The build quality on the ROG Strix was quite good. The larger heatsink has lines cut into it allowing more heat to escape and air to get in there when the fan is on top. Both the VRM front and back was mounted well and made contact with everything it was supposed to which kept it running within specifications during our testing. The oversize chipset and M.2 heatsink also worked well. RGB LEDs were integrated tastefully on the board with only the ROG feature and the back panel IO shroud having RGB LEDs. The ROG RGB LED feature is customizable using a 3D printer with ASUS giving instructions/templates on the website.

Performance on the ASUS out of the box is where things fell a bit short. Though it did well in our main system tests such as power and DPC Latency, it was middle of the pack on tightly coupled tests, or lower in a couple of tests due to how the board handles frequency at stock. In our testing, the i7-7900X boosted to 3.6 GHz on all cores - it appears it simply uses the Intel defaults while other boards we have looked at so far, enable some minor overclocking features by default. This results in the other boards giving an increase in scores over the default Intel boost tables. All this goes out the window when overclocking, to which the Strix X299-XE Gaming was a nice performer matching the 4.5 GHz our CPU can do. The auto-overclocking tools were a little aggressive, giving stability issues.

The ASUS ROG Strix X299-XE Gaming is going to have most, if not all the features an enthusiast level gamer needs to get up and fragging. It uses a high-end audio codec, the latest connectivity with USB 3.1 (10 Gbps) Type-A and Type-C ports, some muti-GPU support, and multiple M.2 ports. The XE name means that it adds to the beefy VRM cooler and provides a fan to support 165W CPUs and higher overclocks better.

However, the difference is in the fine details. At $50 more than the standard Strix, and $370 overall, it doesn't strike the $350-$400 price bracket with fear. In fact, for $323 dollars (around the cost of the non-XE ASUS ROG Strix), the ASRock X299 Taichi XE has the beefed-up heatsink, Wi-Fi, three M.2 slots, high-end audio codec, etc and costs almost $50 less, albeit with fewer gaming oriented software features. For the Strix XE, at $370, it is missing a key factor to make it an obvious sale.