ASUS has outfitted the ZenBook 3 with an Intel Dual Band Wireless-AC 8265 network card. This is a 2x2:2 solution, and it offers MU-MIMO support as well, which is one of the new features over the 8260 model. It’s been one of the more reliable cards available, and Intel’s track record on wireless has been one of the best over the last couple of years. 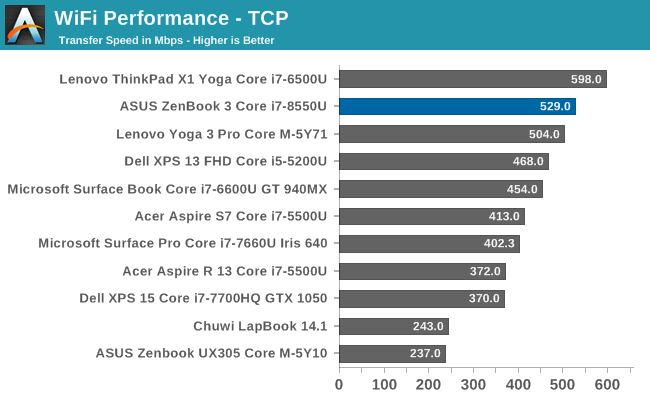 The only laptop with a 2x2 offering to outperform the ZenBook is the ThinkPad X1 Yoga, which has an 8260 network card in it. With the latest generation of network adapters, Intel is one of the few network adapters around where it doesn’t feel like you should immediately plug in a USB Ethernet adapter. The addition of MU-MIMO is nice to get out in the market, even though most people won’t have a router that supports it.

ASUS offers a quad-speaker setup in the Zenbook 3, and the speakers are Harman Kardon certified, although what that means is a bit of a mystery. 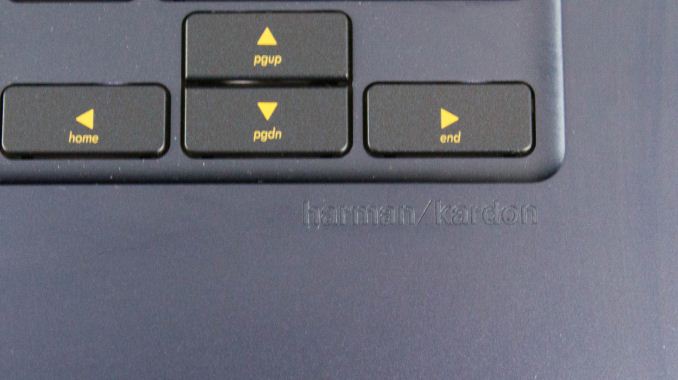 The speakers themselves don't get overly loud, hitting around 83 dB(A) at their peak, but the quality of the sound is rather impressive for such a thin device. Laptops generally have very thin sounding speakers, but the ZenBook 3 feels like it's got a wide sound stage, and although it can't hit the very low notes like a good set of headphones, it sounds fuller than most laptops of this size.

Normally the Webcam doesn't come up much in our reviews, since most of the devices out there offer something that's usable. That's not the case with the ZenBook 3 UX490UA, which ships with just a VGA webcam in 2017. That's a 640x480 picture, and for the price of this device, you'd expect better. If you're someone who uses the webcam a lot, this is not the machine for you. It's that simple. It's terrible.

Despite the 15-Watt TDP, the latest generation quad-core processors from Intel can use well over that, so cooling is key. The ZenBook 3 is built completely out of aluminum, which is certainly going to help, but being a thin and light machine, there’s not a lot of room for heatsinks and fans.

At idle the laptop doesn’t even spin up the fan, which is great. Some laptops do run the fan all the time, even when not doing very much, and less noise is always a good thing. The fans on the ASUS can ramp up to about 45.5 dB(A) with the SPL meter just over the trackpad, which is certainly audible but not unbearable.

Cooling the new quad-core is important, since the chip can pull well over its rated TDP for short bursts of work. To test the thermal capabilities under high CPU load, the x264 benchmark was run for about 25 minutes to give the laptop a chance to hit its maximum temperatures under a heavy CPU load. While this test was going on, we logged all of the relevant data for analysis.

First off, here are some numbers. Over the 25 minutes, the maximum CPU power draw was 28.95 Watts. The PL2 state tries to get the most performance out of the CPU as it can, hoping the job will end quickly. This let all the cores ramp up to about 3.0 GHz, which is well under the maximum boost frequency of the CPU, but the max boost is for one core only. The CPU then hits its maximum temperature allowed, and ramps down to the PL1 state, which in this case is 15 Watts. As an aside, this is an excellent example of modern voltage/frequency scaling; the 8550U's power consumption doubles just to increase the CPU frequency by 40% or so. The last few MHz are always the most expensive, which is why running all four cores active at a lower frequency is sometimes the better-performance choice than running 1-2 cores at a higher frequency.

Over the test, the average CPU frequency was 2209 MHz, and the average temperature of the CPU package was 76.3°C. Average power usage was 12.9 Watts. 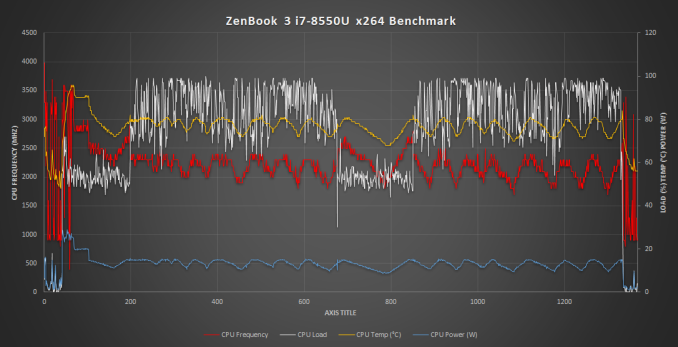 The additional cores certainly impact the thermal capabilities of the chip. There’s no way all four cores can run at their maximum boost in just a 15-Watt envelope, so the frequency has to drop a bit to compensate. But despite this, the quad-core chip easily outperforms the dual-core predecessor at this test, as we saw earlier.

While this is happening, the laptop does get warm. The exterior being all aluminum is going to transfer the heat very well, which is going to be noticeable if it’s sitting in your lap. The maximum temperature measured on the laptop was over 50°C, which is uncomfortable at best. The plastic keys do help insulate the heat from your fingers when working, but when a laptop is as this and light as this, there’s not really anywhere else for the heat to go. If you’re going to work the ZenBook 3 hard, it’s best to do it on a desk.

Overall, the performance of the cooling system is up to the task though. It doesn’t ever get annoyingly loud, and the fan pitch is lower than some systems. The CPU temperature is well in the range of Intel’s maximum 100°C allowed.