MSI's Click BIOS 5 interface is usually seen as a good intro to BIOS options. It has a very easy to use 'Easy' mode upon entry, with the core information about the CPU and the hardware installed in the top third, while the rest of the screen gives different options for information windows, flashing the BIOS, and others. Two of the key elements in the EZ mode are the one button overclock and XMP tools in the top left, called GAME BOOST and A-XMP. 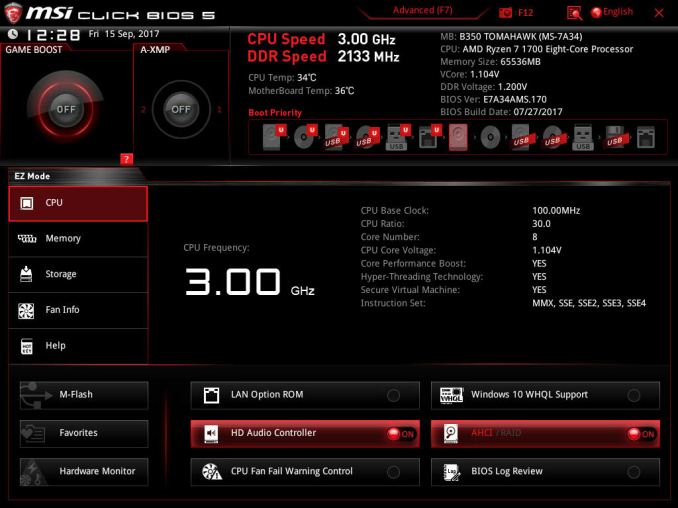 With GAME BOOST enabled, the system enabled an overclock on our Ryzen 7 1700 processor, to a safe and meagre 3.4GHz clock speed, but the disconcerting thing was the sheer amount of voltage the board felt like it needed for maximum stability. With GAME BOOST enabled, the B350 Tomahawk essentially removes AMDs Cool’n’Quiet, sets a x34 multiplier, and a relatively large 1.4 volts on the CPU. Compared to our manual overclocks, this is very inefficient - we can run 3.9 GHz at 1.375 volts.

Other notable and useful options include a switch to enable support for WHQL support for Windows 10, a BIOS Log review to see what changes have been made in the BIOS, and the Hardware Monitor interface, which controls the fans with a user adjustable multi-point temperature/power curve. The fans can be adjusted between DC and PWM modes here, and be controlled individually. 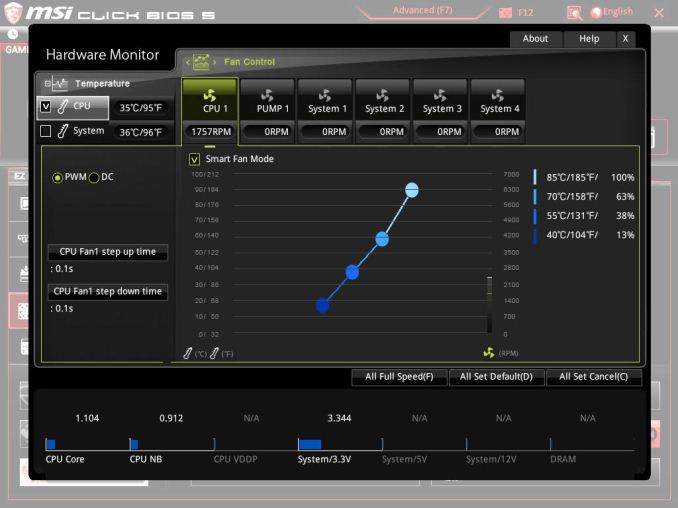 The BIOS has a more advanced mode by pressing F7. The finer details of the system can be adjusted here, such as controller settings, manual overclocking settings, updating the BIOS, adjusting overclocking profiles, and the Board Explorer to see what is being recognized as attached. 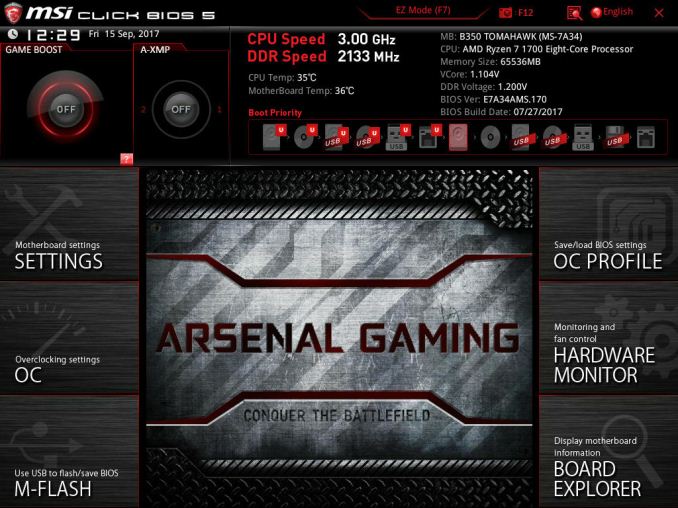 For the extra overclocking settings, there is a Normal mode and Expert mode, with the latter giving a few more options. There is a sufficient range of options here to hit our peak overclocks, however the B350 line typically has a few features missing, such as the lack of an external clock generatior, which means control over the base clock of the processor is restricted. 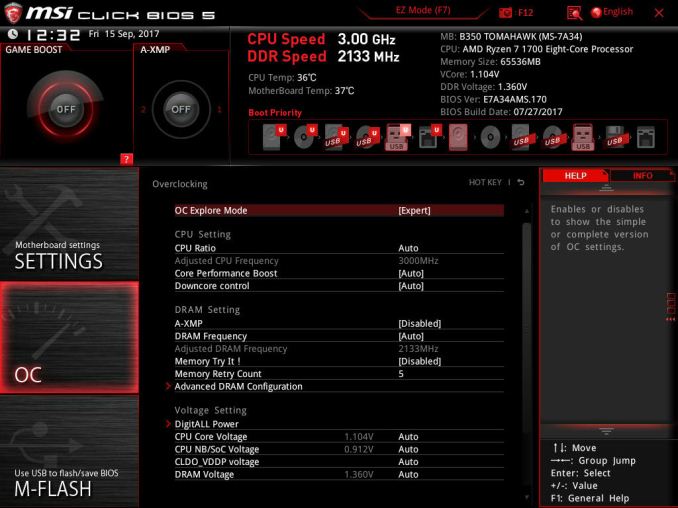 MSI's software revolves around the Command Center. The utility is a hub for what is seen in most of the BIOS: fan curve profiles, overclocking options for CPU/DRAM, and hardware information. 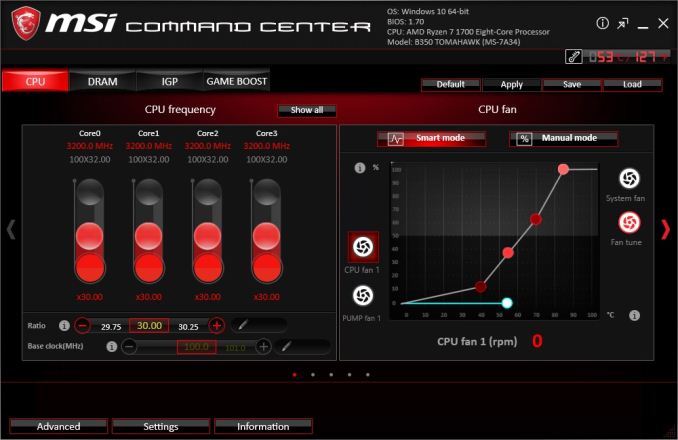 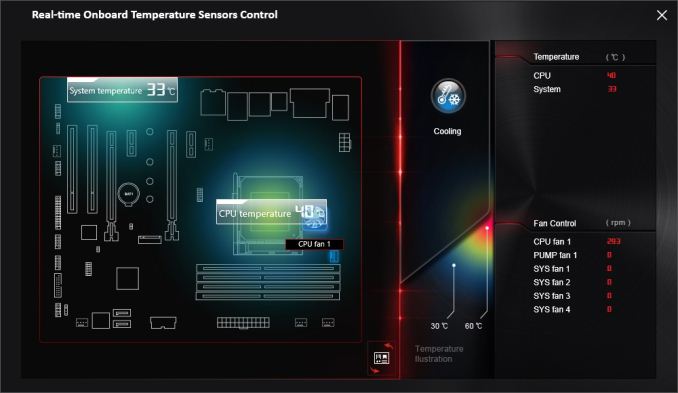 Also bundled in the software is the MSI Gaming App. This offers a selection of three profiles, 'OC Mode', 'Gaming Mode' and 'Silent Mode', with the aim of the first two to boost overall system performance. That being said, we didn't detect any difference in the CPU clock speed or memory frequency when using the first two. 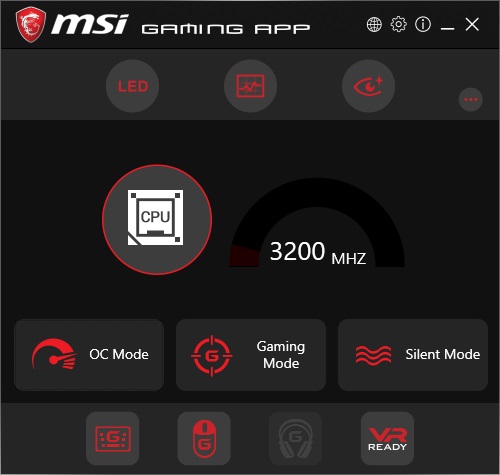 Although the B350 Tomahawk only features red LED lighting, MSI includes a single RGB header for further customization. To adjust the LED settings on this board, the Gaming App software has a variety of effects, such as breathing/flashing. 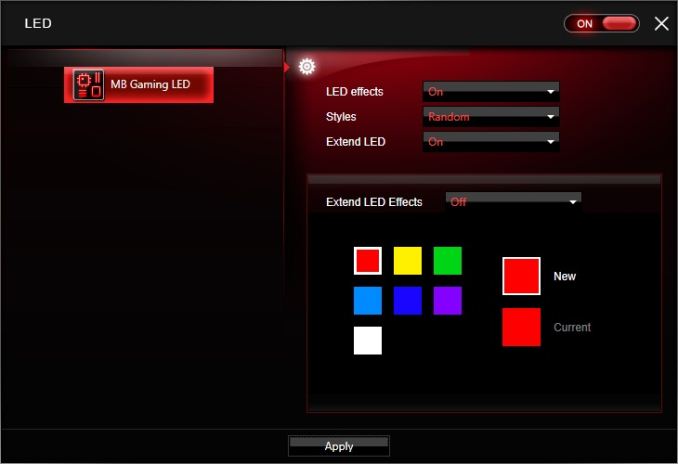 The MSI Gaming LAN Manager is a utility for network traffic shaping. This software allows for the throttling of network capable applications, so a user can direct bandwidth to where it is needed. The interface is a cFos-like implementation, but not as detailed as a Killer device for sure. 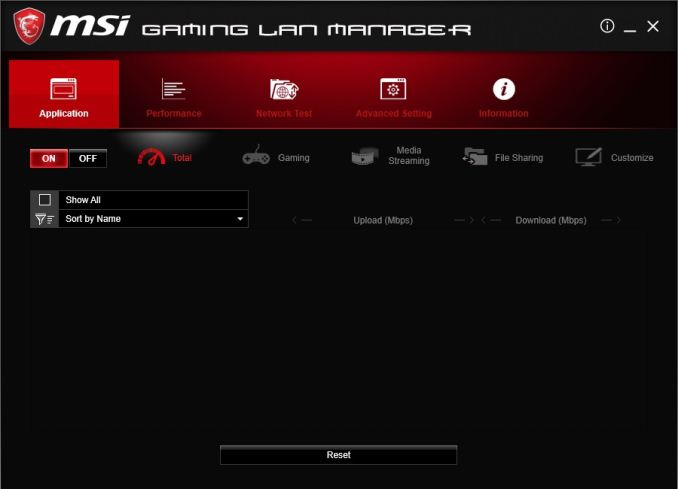 The best utility of the bunch is MSI's Live Update 6. For a number of years, this application has been the forerunner for quick and easy updating of all installed drivers and software relating to the motherboard. When running an automatic scan, it also lists pre-approved software that is not installed as well. Live Update 6 also allows for quick and easy updating of the BIOS. 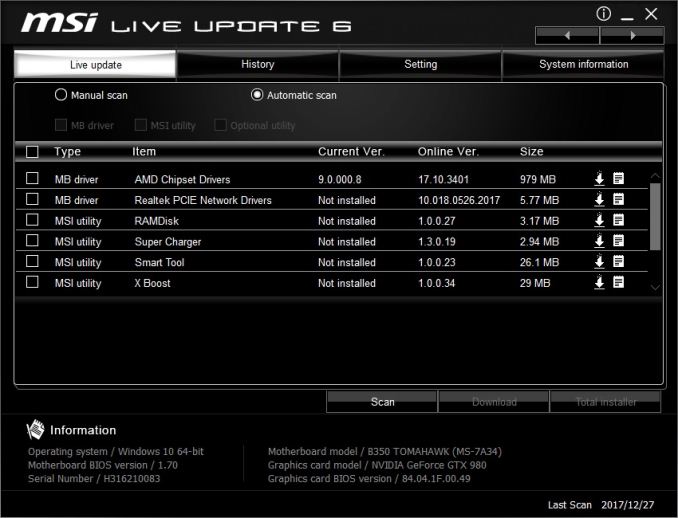 Despite using the budget Realtek ALC892 audio codec, MSI has paired it up with the Nahimic 2 audio software. With a similar feel and look to the Creative SoundBlaster software, the most notable aspect is the ability to cycle through a variety of different presets ranging from gaming, to music and films. Also featured is a range of settings on how to adjust the microphone sound over voice communication software such as Skype or Discordor others.

There are also options for streamers, which include the Nahimic Audio Launchpad that allows users to allocate sound bites and audio samples to specific key binds; it has shades and the familiarity of the Elgato Stream Deck, but without the complication or the need to spend $100+ on additional hardware. 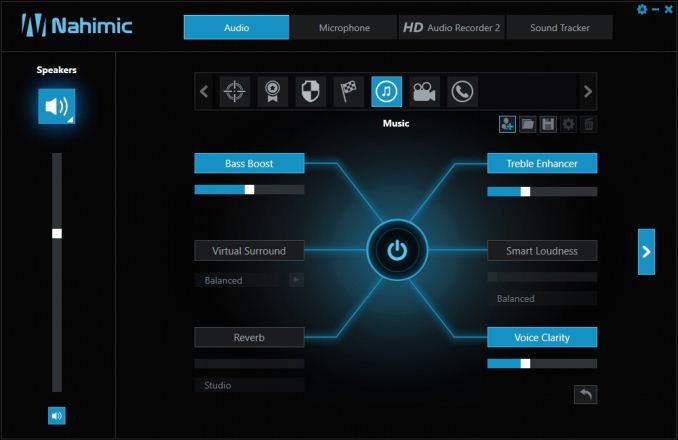