Next up from the new ASUS ROG Z370 line-up is a pair of ATX sized offerings which sit within the mid-range separate group of at least four STRIX boards. Both of the Z370-E and Z370-F STRIX Gaming motherboards have a near identical feature set with a few main separating features. Firstly, the Z370-E features a set of silver metallic heat sinks, whereas the Z370-F uses a darker tough plastic. The other main distinguishable feature is the inclusion of integrated 802.11ac Wi-Fi with an antenna (that can only be described as a shark fin) found on the F. 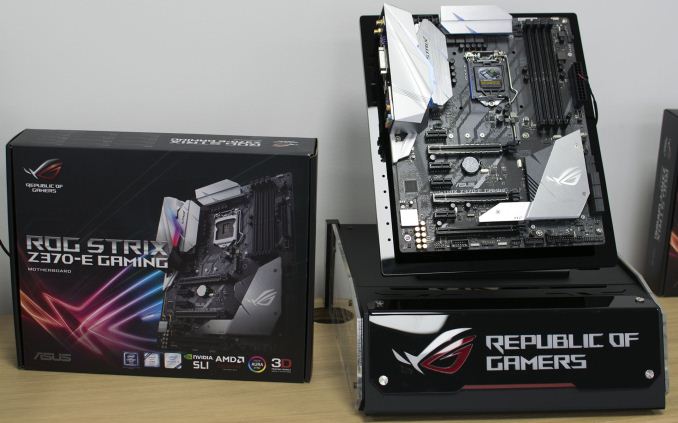 Both of these models incorporate a single Intel I219-V Gigabit LAN controller and use the Realtek ALC1220 audio codec, a popular combination for the Z370 platform. The mid-range looks to be a congested field on Z370, but both of these boards feature identical PCB layouts including three full-length PCIe 3.0 x16 slots with the top slot running at x16 or x8 from the CPU, the second slot running at x8 from the CPU, and the bottom slot uses PCIe 3.0 x4 from the chipset. Both the top full-length PCIe x16 slots have SafeSlot reinforcement which adds additional torque protection to the slots. An additional three PCIe x1 slots are included. Overall two way SLI and 3-way Crossfire graphics configurations are supported. 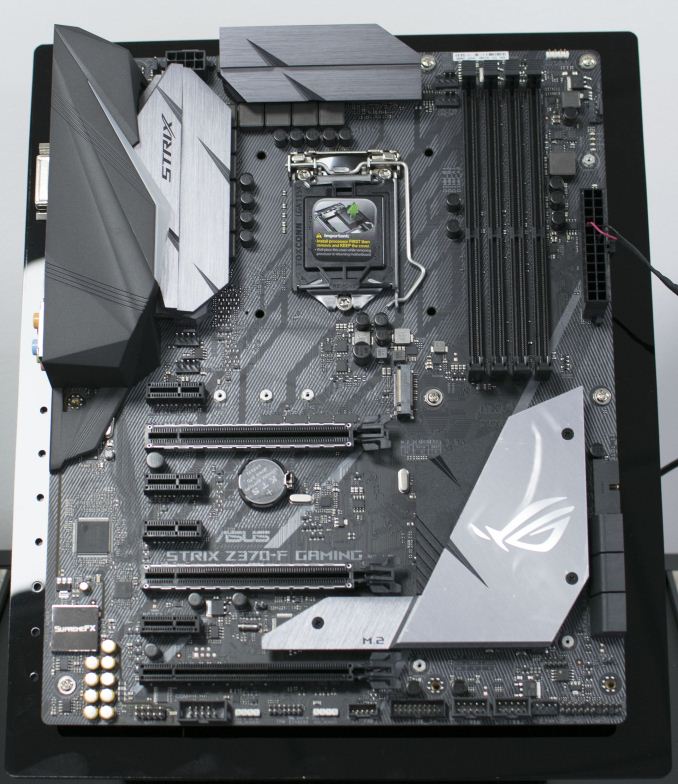 Moving onto memory compatibility, the Z370-E and Z370-F Strix motherboards have four DIMM slots, supporting two DIMMs per channel, and a board rated support for DDR4-4000 MT/s. ASUS puts their higher support down to their T-Topology technology which they claim allows for stability and signal quality due to the parallel and equal length of the traces between the memory and the CPU. ASUS has stated that the 3rd generation of T-Topology is omnipresent on the ASUS Z370 range.

Storage wise, this pair of Strix ATX sized boards have six SATA 6Gbps slots and dual PCIe 3.0 x4 M.2 ports, with support for the high-end NVMe compliant SSDs. Most of the ASUS Z370 options in an ATX form factor feature six SATA ports except for the budget Z370-P and the overclocking focused Maximus X Apex. The bottom M.2 slot on these two Strix boards has an integrated heat sink which links into the chipset heatsink to aid in cooling M.2 SSDs that run hot. ASUS claims a drop of around 15c when using this heat sink.

Looking at both models aesthetically, the twin Z370 Strix boards have two contrasting designs; the Z370-E has a lighter finish with the metallic heat sinks and the Z370-F uses plastic heat sink covers with a darker charcoal finish. Both feature customisable AURA SYNC RGB lighting around the I/O cover and have room for expansion due to the dual RGB strip and single addressable RGB header; all these are also compatible with AURA SYNC. 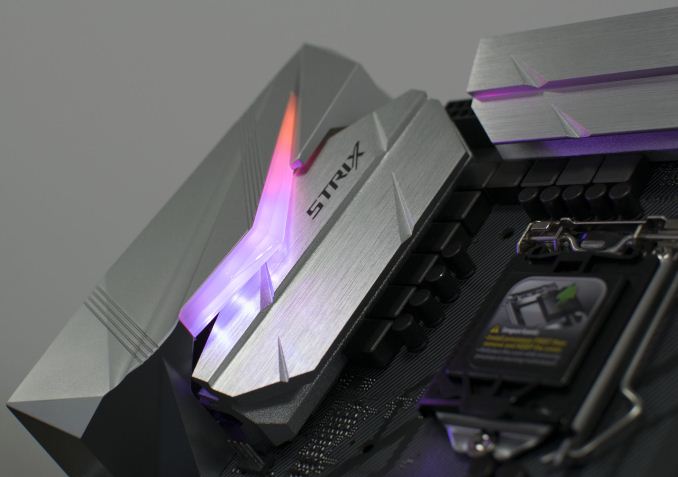 Although not as connection rich as the high-end boards, the Z370-E and Z370-F Strix motherboards have a solid rear I/O with USB 3.1 10Gbps ports aplenty on the Z370-E. The Z370-E has a front panel connector 10Gbps USB header and dual-band 802.11ac Wi-Fi, both of which are not found on the Z370-F. Both models encompass a USB 3.1 Type-A and Type-C port in addition to two USB 3.1 10Gbps ports. Users looking to make use of on-boards graphics will be pleased with a wave of inputs including DVI-D, HDMI, and a DisplayPort; all of the three main digital connection types for hooking up to a monitor.

Finishing off the mid-range premium Z370-E and Z370F boards, we have a total of five PWM fan headers with one dedicated to AIO CPU coolers and a single header for a thermal sensor. Both of these boards fit the mid-range segment well and the Z370-E especially could be considered slightly more premium than the Z370-F. Dependant on launch pricing, the Z370-E Strix could be a serious contender, providing the performance matches the feature set and how the price sits within other manufacturer’s options.