Another board currently in MSI’s Enthusiast Gaming lineup is the Z370 Gaming M5. Outside of size, the Gaming M5 is ATX versus the Godlike at E-ATX.

The overall theme on the board is a black PCB with a few grey highlights of components mixed in. The top half of the board should look pretty familiar when comparing the Gaming M5 to the Godlike Gaming flagship. While the shape of the shroud and VRM heatsinks are the same, the RGB LEDs inside on the Godlike were removed. It still carries over the fortified memory slots but loses some fan header connectivity as well as losing other RGB LEDs in that area. The PCIe area has a shroud between the slots and covers the audio portion of the board but it is not an extension of the back panel IO shroud. The PCH heatsink loses the GPU stand but keeps the same shape and RGB LEDs. Additional RGB strip support can be found through the RGB connector on the bottom of the board. 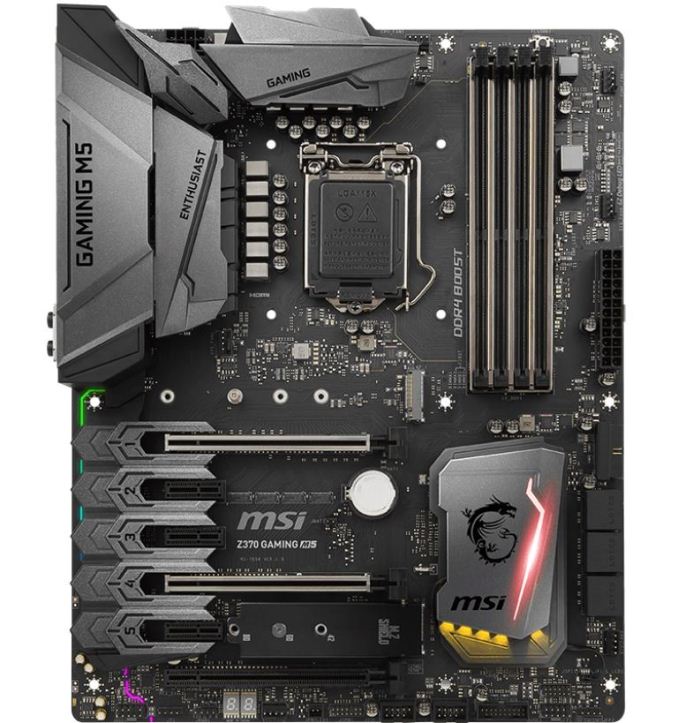 The four memory slots supports up to 64 GB in dual channel mode, with a supported speed up to DDR4-4000. There are a total of three full-length PCIe slots, the first two from the CPU using reinforced slots while the third is from the chipset. This allows for running in x16/x0/x4 or x8/x8/x4 configurations, and supports 3-way AMD Crossfire and 2-way NVIDIA SLI. Between the full-length slots are three x1 slots, getting their bandwidth from the chipset.

The board has the usual complement of six SATA ports all located on the right side of the board next to the chipset heatsink. As a side note, SATA 1/5 will be unavailable when an M.2 SATA SSD module has been installed in the first M.2 slot, while SATA 5/6 will be unavailable when an M.2 SATA SSD is used in the second M.2 slot. RAID 0, 1, 5, and 10 are supported for all SATA devices. A total of six 4-pin fan headers are found in various locations throughout the board: four system fans, one water pump, and one CPU fan connector. The audio is handled by the latest Realtek ALC1220 codec along with Chemicon audio caps and the familiar audio separation line running splitting the audio section from the rest of the board, minimizing interference. A single Rivet Networks Killer E2500 gigabit Ethernet controller is found on the Gaming M5. The power, reset, and Game Boost knob are gone, however, a debug LED can still be found on the bottom of the board. 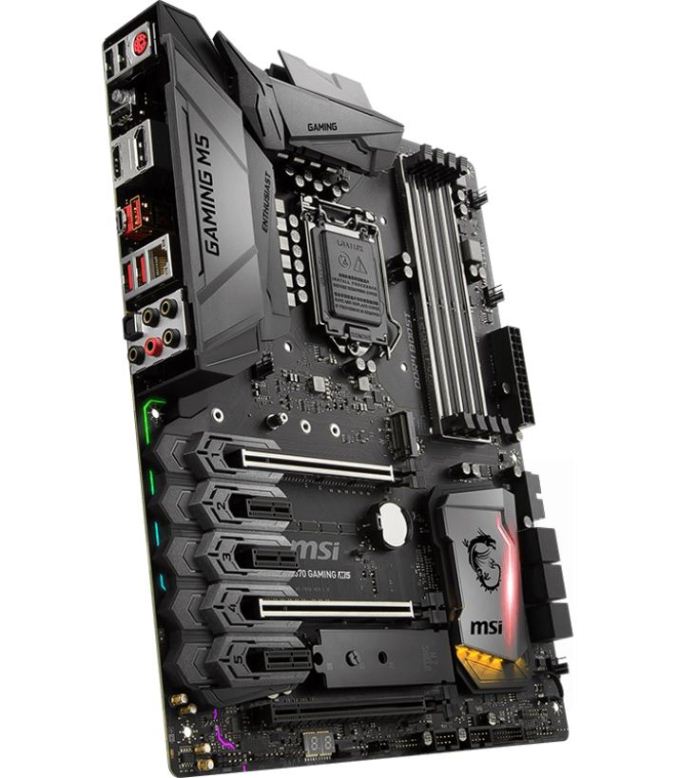