On the Micro-ATX side of things, MSI is bringing two boards to market. The first is the Z370M Gaming Pro AC from the Performance Gaming series.

The Z370M Gaming Pro AC has a black PCB but does not have any added stenciling design on the board itself. The only initial color comes from the red LEDs (which are not RGB) located on the back of the PCB, although an RGB LED strip can be added via the onboard header. The power delivery heatsinks are designed to match the board aesthetic, but again have only a hint of a design on it. The back panel cover has the Gaming Pro name on it and what looks like vents on the inside portion. The chipset heatsink here is also quite small, has the MSI name on it with white accents, and is attached to the motherboard with screws rather than push-pins. 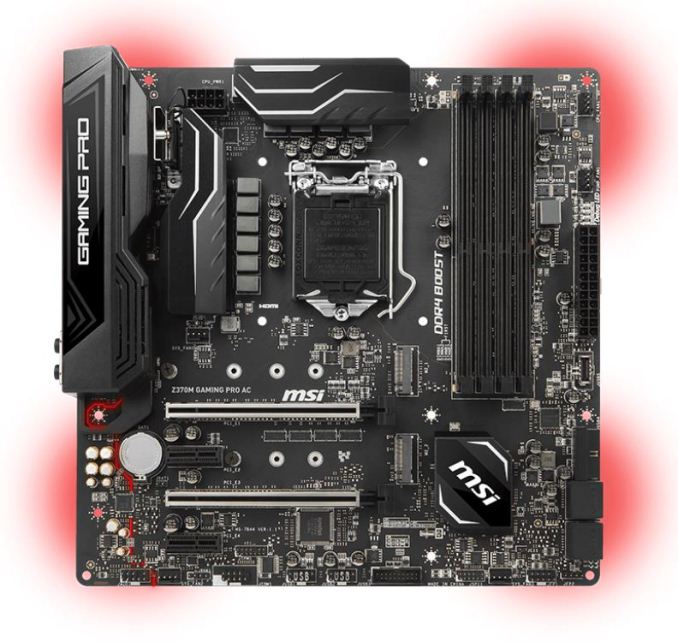 Memory support for the Z370M goes up to 64 GB capacity, with an on-the-box rated speed up to DDR4-4000. There is no memory slot reinforcement, however it does use a double-sided memory latches to secure the memory. The Z370M Gaming Pro AC is equipped with two full-length PCIe slots, for x16/0 or x8/x8 bandwidth from the processor, supporting 2-way SLI and Crossfire. There are also two additional PCIe x1 slots.

Due to the smaller board size, MSI has only placed four SATA ports from the chipset, and in this case all four ports are together in a typical horizontal location. There are two M.2 slots for additional storage, with both of the slots here supporting PCIe 3.0 x4 and SATA drives - the top slot is good for 110mm drives, while the slot between the PCIe lanes is good for 80mm drives.

The Z370M Gaming Pro AC has a total of five 4-pin headers scattered around the board, three in and around the socket area with the other two on the bottom of the board - all the headers support both PWM and voltage control. Networking connections are handled by the Intel I219-V Gigabit controller, with the AC also having an Intel 802.11ac Wi-Fi module. Audio duties are processed by the latest Realtek ALC1220 codec, and we get some PCB separation for the codec to improve signal quality. 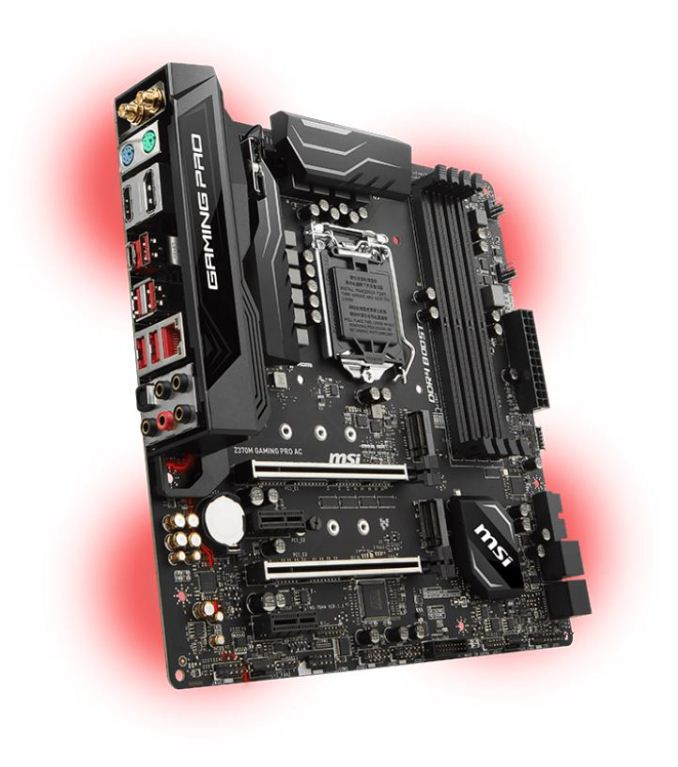 The Z370M Gaming Pro AC uses an ASMedia ASM3142 controller for its two USB 3.1 (10 Gbps) ports: one Type-A and one Type-C on the back panel, plus an additional onboard header. On the rear panel there are another four USB 3.1 (5 Gbps) ports, but no USB 2.0 ports. The remainder of the back panel IO has the Intel AC8265 Wi-Fi adapter, two PS/2 ports, DisplayPort and HDMI video outputs, the Intel I219-V network port, and the audio jacks from the ALC1220 plus SPDIF.