Sliding down the MSI product stack, the next board is the Z370 Gaming Pro Carbon (offered with and without Wi-Fi depending on the region). While it is still a fully featured board, and sits above almost all of MSI's product stack, it is the smaller sibling to the Godlike Gaming, but will be much cheaper as a result.

The Gaming Pro Carbon AC is based on an all-black PCB using all black slots and ports. It is less flamboyant than the Godlike Gaming with gray stenciling on the board around the socket area and uncovered audio section, as well as the chipset area, but the PCH heatsink is redesigned and has a carbon fiber middle with the MSI name above the integrated RGB LED underneath. The audio separation line, the back panel shroud, and below the ATX 24-pin are where the RGB LEDs hide. Additional RGB headers can be found on the bottom portion of the board and all can be controlled by the Mystic Light App. Two of the three PCIe slots are reinforced, while all of the DIMM slots use the Steel Armor. 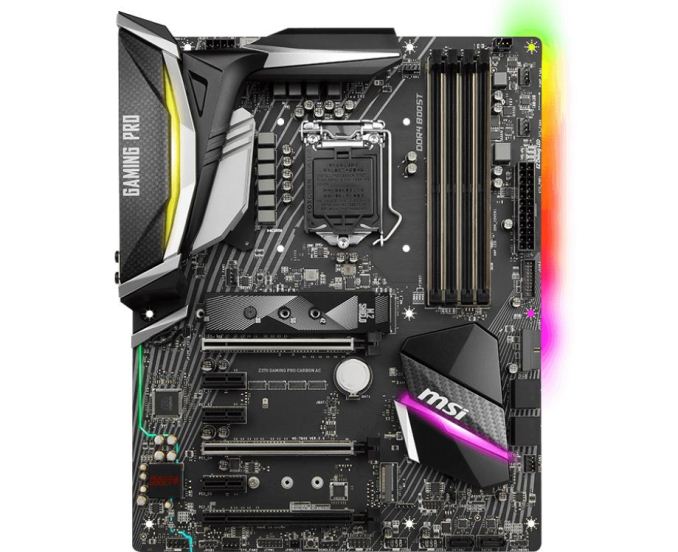 Four memory slots on the ATX board give capacity support up to 64GB, with speeds up to DDR4-4000. All the memory slots are reinforced, and use single sided latches, which can make it easier to remove the modules in the presence of a large graphics card but require extra care when putting them in. There are a total of three full-length PCIe slots, two of which are fortified with MSI's Steel Slot. These two are powered by the CPU and run at x16/x0 and x8/x8. The third PCIe slot runs at x4 and gets its lanes from the chipset. The board supports 2-Way SLI from NVIDIA and 3-Way Crossfire from AMD. Lastly, the three x1 slots on the board also fed from the chipset and are sprinkled between the full-length slots.

The board has six SATA ports, four of these are at a 90° angle in the ‘normal’ location, while two others are vertical on the bottom right-hand portion of the board. For the two M.2 slots, the first M.2 slot is located above the first PCIe slot and supports 110mm drives with an included heatsink, while the second M.2 slot sits between the last two full-length slots and will support up to an 80mm drive. There are a total of six four-pin fan connectors on the board, one for the CPU, another for a water pump, and the last four are system fan headers. Audio is handled by an EMI shielded Realtek ALC1220 codec which uses Chemicon audio capacitors. Gone is the monopoly of Killer NICs from the Godlike Gaming, replaced by a lone Intel I219-V gigabit ethernet controller. There is still Wi-Fi on the AC model via a bundled PCIe card, which uses an Intel AC8265 controller. 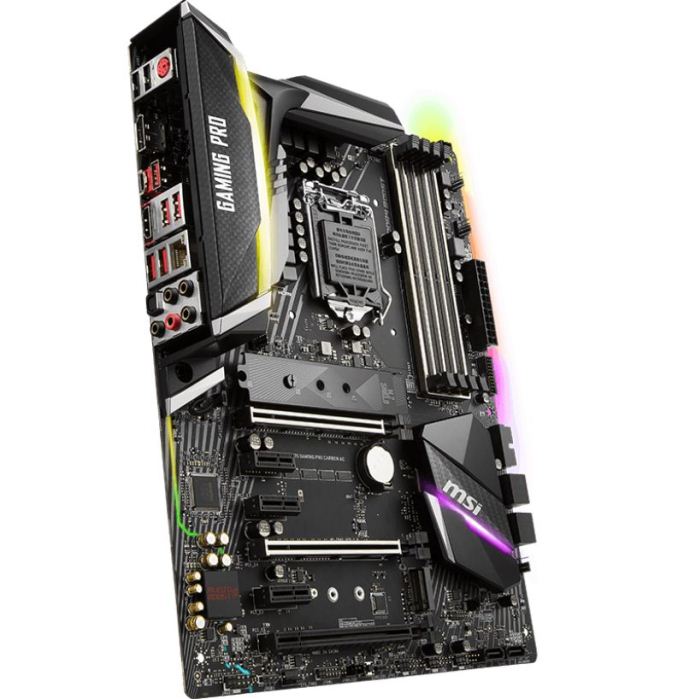