ECS hasn’t had many boards to offer the enthusiast segment in a couple of generations, mostly focusing on the business class chipsets, like the H110 and B250. However they have continually released at least one 'enthusiast' class board per generation, more recently under the name of 'Lightsaber' or 'Claymore'. The Claymore didn’t make it to Z270, but the Lightsaber did, as well as a mITX board. With Z370 and Coffee Lake processors being released, ECS has announced their Z370-Lightsaber motherboard. This board, we are told, is targeted at gamers.

As far as looks go, the Z370 Lightsaber is fairly plain with a black PCB, black VRM heatsinks, and black and grey memory slots. There isn’t a shroud covering the rear panel, with the silver ports and the audio area in full view. The VRM heatsinks are connected via a heat pipe and look like they can do the job, with multiple rows of fins to increase surface area and aid in heat dissipation. The Lightsaber does have four RGB LED headers on the bottom which are adjustable through the BIOS, although no RGB LED elements present built into the board. 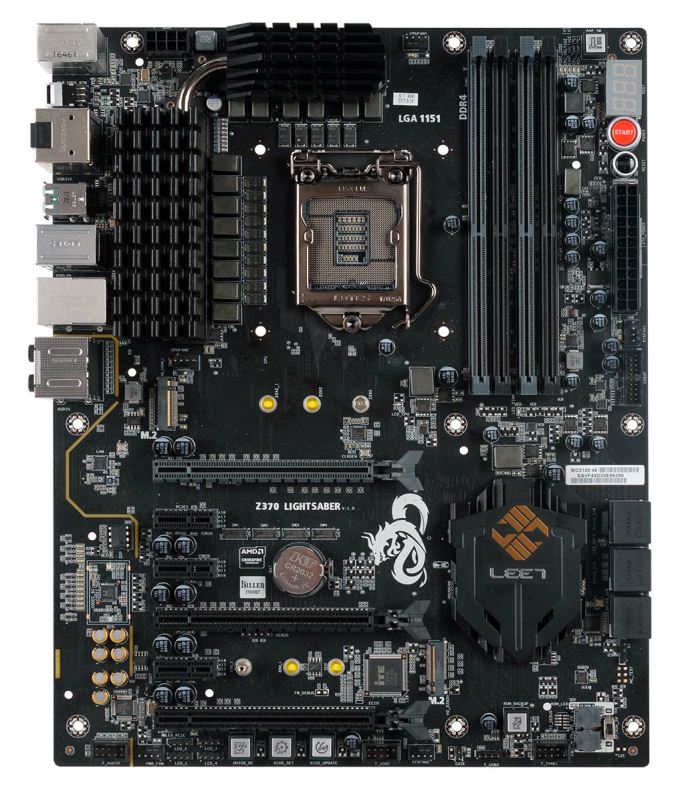 As with most ATX motherboards, we get four memory slots supporting up to 64GB in capacity, although ECS quotes the maximum supported memory speed as only DDR4-3200, compared to the DDR4-4000 range we are seeing on most other boards. The board does have three full-length PCIe slots, and three PCIe x1 for expansion. The board only supports AMD Crossfire and not NVIDIA SLI, and so the lane breakdown would be x16/x4 from the CPU for the two primary slots with the last slot being PCIe 3.0 x4 and fed from the chipset.

Storage options consist of two M.2 PCIe 3.0 x4 slots, with one of them supporting SATA as well. The top slot is able to hold 110mm drive while the bottom slot supports up to 80mm devices. The board comes with six SATA ports supporting RAID 0, 1,5, and 10, and has a total of five fan headers scattered around the board - one by the CPU area, another by the ATX 24 pin power connector, two across the bottom of the board, and one just below the left VRM heatsink. Audio duties are handled by the ALC1150 codec, which was last generation’s flagship model. The audio is not EMI shielded but does have independent power delivery to minimize any interference. Nichicon audio capacitors, as well as gold plated contacts round out the audio portion. The Lightsaber, a gaming-focused board, has chosen the Rivet Networks Killer E2500 network controller, and takes advantage of the network controlling features therein. The board comes with a three-digit debug LED (rather than a two-digit one) as well as onboard start/reset buttons. On the bottom of the board, there are buttons for one-touch overclocking, BIOS selection, BIOS updating, and a ROM backup button which should make backups and updates to the dual BIOS easier.

For USB connectivity, there is a total of 10 USB ports on the back panel. Two USB 3.1 (10 Gbps - only Type-A) from an ASMedia controller, four USB 3.1 (5 Gbps), and four USB 2.0. The back panel also has a single PS/2 port, a clear CMOS button, DisplayPort and HDMI video outputs, the Killer E2500 NIC, and the audio stack plus SPDIF (above the video outputs).

Pricing nor availability was listed for the ECS Z370-Sabertooth. The Z270 Lightsaber was released at $199 and due to the similarities between the boards, we expect this to be priced similarly.