Our next board in the GIGABYTE Z370 lineup is the Gaming WIFI. This board appears to find itself in the somewhere around the Gaming 3 and Gaming K3 in the product stack. The board uses the Creative Sound Core3D audio over the more traditional ALC1220 in a nod towards 'gaming'. As the name implies, the Gaming WIFI includes Intel WiFi in addition to the Intel NIC.

On the appearance side of things, the Gaming WIFI looks strikingly similar to the Gaming 3. The difference here is the removal of the red parts to black parts, such as the all-black DRAM slots and all-black PCIe slots. The only red remaining comes from the back panel IO shroud, and the WIMA caps in the audio section. Otherwise, its the same board, appearance wise, from the PCH heatsink to the AORUS Falcon prominently stenciled on the board. We get RGB LEDs on the heatsink and audio separation line, but also LEDs around the VRM area on the Gaming WIFI. 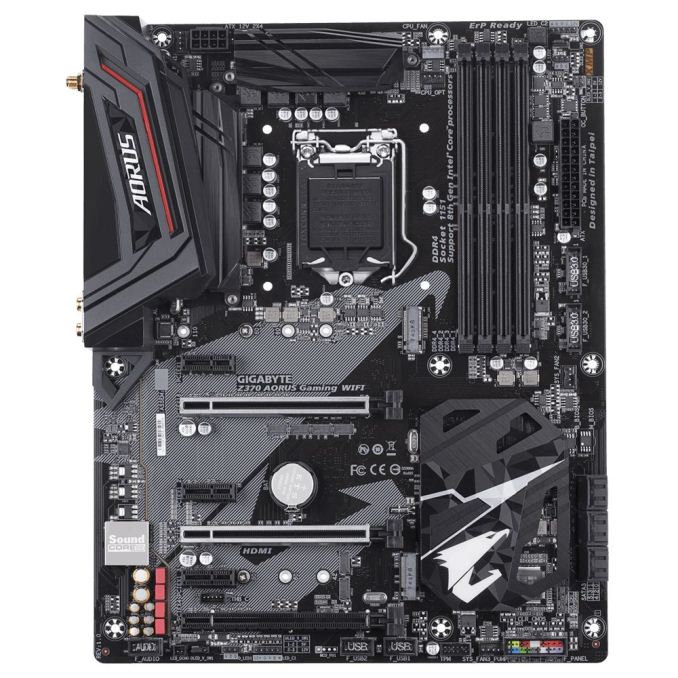 Memory support on this board is the same as the K3 and Gaming 3, supporting a capacity up to 64GB and speeds to DDR4-4000. The PCIe slot arrangement changes a bit and consists of two reinforced, CPU fed, full-length slots running at x16 and x8/x8, supporting AMD Crossfire and NVIDIA SLI, and another full-length slot running at x4 driven by the chipset PCIe lanes. Users will also see three PCIe 1x slots also fed from the chipset.

The board has six SATA ports, to the right of the PCH heatsink and parallel to the board. The M.2 slots are above the top PCIe 1x slot and the second is above the bottom, non-fortified full-length PCIe slot. They support drives in 110mm and 80mm length respectively. The Gaming WIFI has a total of five hybrid fan headers located around the board and can be controlled by the Smart Fan 5 application. Two RGBW headers and two digital LED headers are there to use if the included RGBs are not satisfactory. The onboard audio moves away from the Realtek ALC1220 codec and uses the Creative SOund Core3D audio, and has EMI shielding and uses Nichicon and WIMA audio caps. For networking, the Killer E2500 NIC found on the Gaming 3 is replaced by an Intel GbE LAN. This motherboard supports Thunderbolt 3 via an add-in card, and the connector for the card is located between the last full-length PCIe slot and the bottom 1x slot. 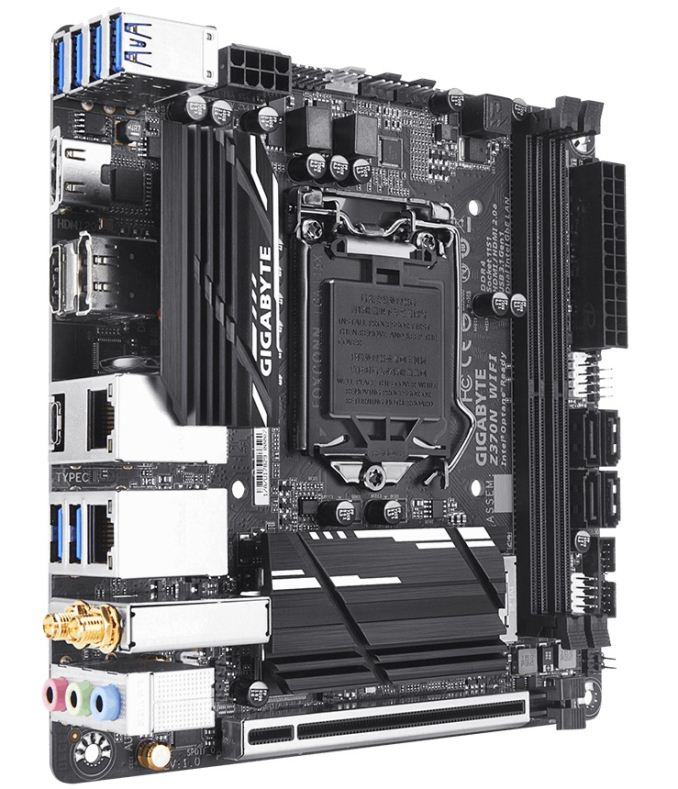 USB 3.1 (10 Gbps) duties are handled by an ASMedia 3142 controller giving Type-C and Type-A ports on the back panel IO. From the chipset, there are a total of 10 USB 3.1 (5 Gbps) ports with six on the back panel and another four available through the internal USB headers. Also sourced from the chipset are two USB 2.0/1.1 ports through internal USB headers. Additionally, the Gaming WIFI gains two more USB 2.0/1.1 ports through a Genesys Logic USB 2.0 hub and can be accessed through internal USB headers as well. The rest of the back panel IO consists of a combination PS/2 port, the Intel 3165 WiFi adapter, an HDMI output, and a gold plated audio stack including a SPDIF port.

The Gaming WIFI has an interesting set of features with the inclusion of Wi-Fi, and using the Creative Sound Core3D audio instead of the Realtek solution. This also gives users an option of using SPDIF which the Gaming 3 and K3 lack. Also supported is SLI.