The Z370 AORUS Gaming K3 motherboard fits in towards the bottom of the Gaming motherboards but has many of the features users need to be a solid gaming motherboard. Gone is the Killer E2500 NIC and replaced with an Intel I219-V chip. The back panel I/O adds a DVI output for onboard video connection but removes the OC button found on the Gaming 3. RGB Fusion support is still here along with RGBW headers, as well as keeping two M.2 slots.

Between the Gaming 3 and K3 there are few design changes between them. The black PCB and Falcon make its appearance along with the four DIMM slots alternating red and black. The biggest design difference between the two is the lack of a shroud to cover the I/O area. This is a small cost saving measure at the expense of a clean look around back panel IO as well as the RGB LEDs being relegated to the audio separation line and the PCH heatsink. Additional RGB LED strips can be added using any of the four headers (2 RGBW, two digital) all controlled by the RGB Fusion software. 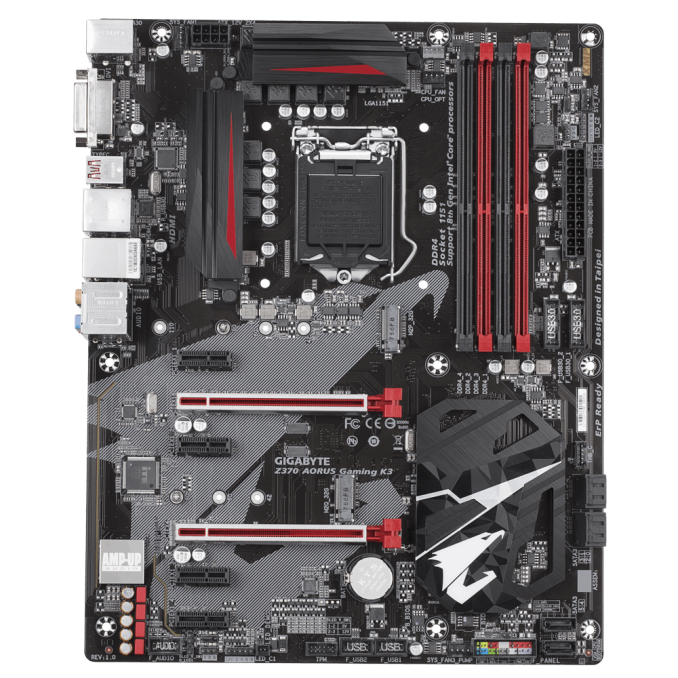 The four memory slots and DDR4-4000 memory support matches the Gaming 3, and a capacity of up to 64GB is supported. The PCIe slot configuration is also the same as the Gaming 3, with four PCIe 1x slots fed from the chipset, and two full length, fortified slots running at x16/x4 with the x4 coming from the chipset. We again see Crossfire support, but not NVIDIA SLI.

The board has six SATA ports, with four located to the right of the PCH heatsink, and two facing vertically just below it and to the right of the front panel headers. The two M.2 slots are also in the same location as the Gaming 3 and support the same size drives. These are located just above the top PCIe 1x slot and just above the bottom full-length PCIe slot. Onboard audio is still handled by the Realtek ALC1220 codec, is shielded for EMI, has audio separation from the rest of the board, and uses the WIMA and Nichicon audio caps. In a cost-saving measure, the board uses an Intel-based NIC instead of the Killer Networks E2500 found on the Gaming 3. WiFi is not found on this board either. Thunderbolt 3 support is handled with an add-in card as well. 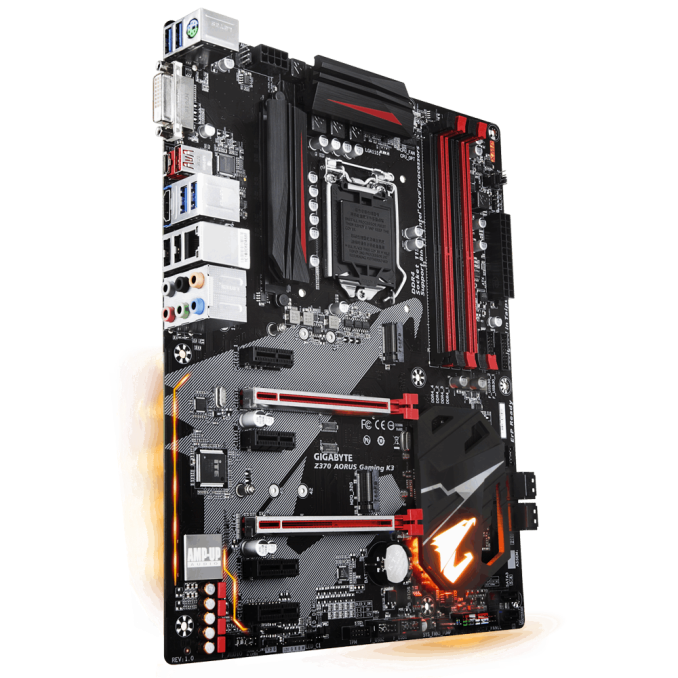 The Z370 AORUS Gaming K3 has a few cost-saving measures compared to the Gaming 3 such as swapping the Killer NIC for Intel, and removing the back panel IO shroud, and secures its place a bit lower in the product stack. While fully featured, the lack of SLI support will have those with multiple NVIDIA GPUs looking at other products in the stack for the necessary support.