The next board is the Z370 AORUS Gaming 3. This board purports to be on the middle of their Gaming series of motherboards and includes RGB Fusion, dual M.2 slots, a Killer E2500 Gaming LAN, the Ultra Durable feature set, and a different color scheme than the other boards in the gaming line.

The Z370 AORUS Gaming 3 uses a black PCB with the AORUS falcon stenciled in through the PCIe area. What is different here compared to some of the other gaming boards is that the reinforced PCIe slots are red instead of black. Instead of all black DIMM slots, two on this board are red; a departure from all black we have seen on the Gaming line previously. The DIMM slots on the Gaming 3 also do not have the strengthened slots. It uses the same chipset heatsink as the Ultra Gaming, and the heatsink is one of two places users will find RGB LEDs on the board. The other location is the audio separation line. 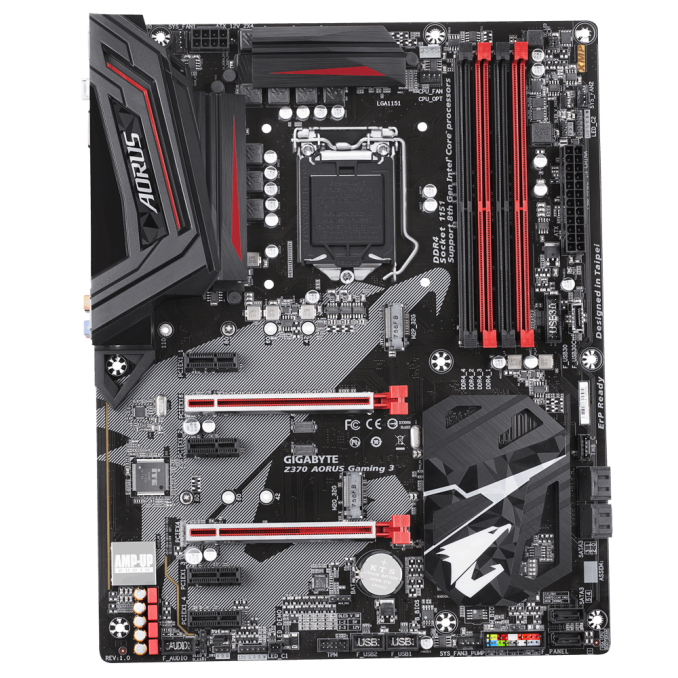 The Gaming 3 uses the platform standard four DIMM slots with speeds up to DDR4-4000 and capacity up to 64GB. The PCIe layout is different on this board compared to what we have looked at previously from GIGABYTE: on this board, there are only two full-length PCIe slots and four PCIe 1x slots. The full-length slots are reinforced (part of their ultra-durable features) and run in an x16/x4 configuration allowing AMD 2-Way Crossfire but not SLI as NVIDIA requires an x8 speed on the slot. That PCIe 3.0 x4 is powered by the chipset, similar to the Z370-P.

For SATA storage, there are six SATA ports, four of which are located on the right side of the board by the PCH, while the other two are found a towards the bottom right-hand corner in a vertical orientation. The two M.2 slots are located just above the top PCIe 1x slot and just above the second full-length PCIe slot. The top slot supports 110mm drives, while the bottom supports up to 80mm.

There are a total of five fan headers on the board. with the CPU and water cooling CPU fan headers by the socket, a system fan by the 8-pin EPS plug, a system fan to the right of the DIMM slots, and the last header is at the bottom of the board. If the lack of RGB LEDs on the board is a turn-off, there are RGBW headers found on the board (one across the bottom, the other by the 24-Pin ATX power connector). Onboard audio is handled by the EMI shielded Realtek ALC1220 codec and like most other gaming boards, uses the Nichicon and WIMA caps. The NIC of choice on this board is the Rivet Networks Killer E2500 and is the only network controller on the board. The Gaming 3 does not include WiFi. Thunderbolt 3 is supported on this board via AIC (Add-In Card). 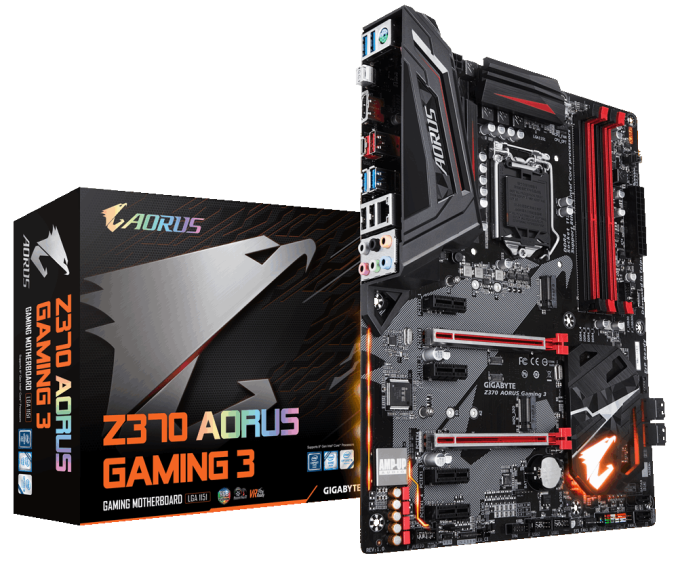 The Gaming 3 finds itself squarely in the middle of the GIGABYTE stack. The mix of features, such as the Killer Gaming NIC, an upgraded audio section, and reinforced slots keep gaming a priority on this board. However, the lack of SLI support will send those with multiple NVIDIA GPUs looking elsewhere.