GIGABYTE AORUS is starting off its entrance into the Z370 chipset with a total of nine offerings. The 'entry level' Ultra Durable lineup has three boards: the Z370XP SLI, HD3P, and HD3. The AORUS Gaming lineup has the other six boards, offering more features and glamor than the UD boards. From the flagship down there is the Gaming 7, Gaming 5, Ultra Gaming, Gaming 3, Gaming K3, and Gaming Wi-Fi. Each board will offer slightly features from a different VRM section, the number of M.2 connections, USB, networking, audio codecs, and more.

The AORUS Gaming 7 looks to be the brightest (literally) board of the bunch with RGB LEDs found in several places on the board: the IO cover, the VRM heatsink, by the VRMs on the board, between the DIMM slots, on the PCIe slots, the PCH heatsink, and finally, an aesthetic strip on the right side by the 24-pin ATX connector.

All of the full-length PCIe slots have steel reinforcement to prevent slot damage against heavy video cards. The Gaming 7 is the only board in the lineup to add power/reset and overclocking buttons on the PCB which are located in the upper right-hand corner. The Gaming 7 uses different chokes for the VRM from Coiltronics (FP 1007) - from the pictures provided, we are unable to tell if the MOSFETs or controller is different to the Gaming 5. For more BCLK range and flexibility for overclocking, there is a BCLK generator under the EMI shield between the top M.2 and PCIe slots. 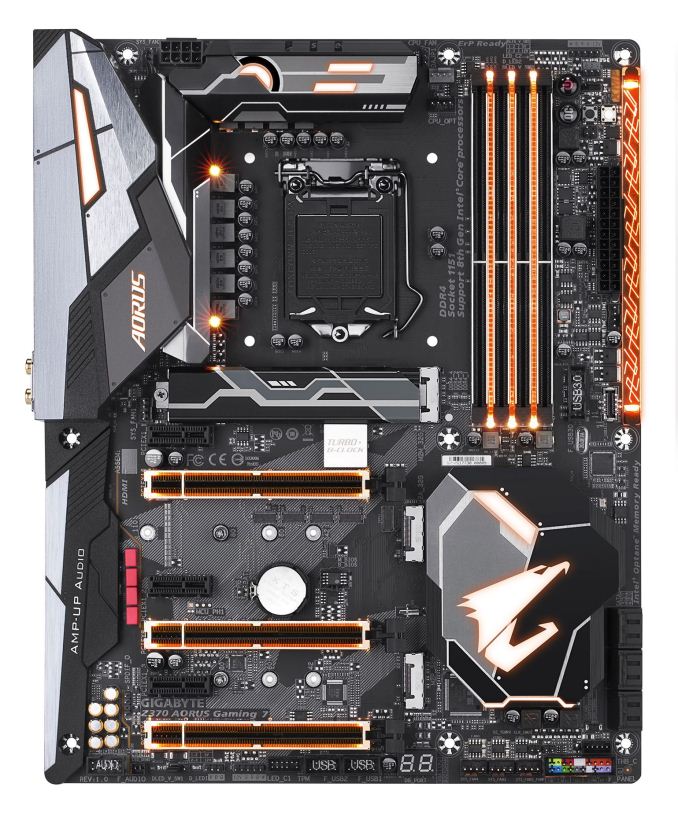 The Gaming 7 uses of four reinforced DIMM slots with RGB LEDs in between. capable of up to 64GB of system memory. The supported memory speeds for the Gaming 7 (and Gaming 5) are the highest in the GIGABYTE lineup at DDR4-4133. The other boards will top out at DDR4-4000 by comparison. The PCIe slot locations allow for triple wide video cards to be used in a Dual GPU setup and are wired in an x16/x8/x4 configuration with the last slot powered by the chipset, meaning two-way SLI and three-way Crossfire are supported. PCIe x1 slots are located above the first, second, and last full-length PCIe slots and are fed from the chipset. The last PCIe slot shares bandwidth with the M2P_32G and will operate at up to 2x mode when using a PCIe SSD in that specific slot.

For SATA storage, we will see a pretty familiar theme across the entire lineup as each board will have six SATA ports. In the case of the Gaming 7, they are located to the right of the chipset heatsink and set at a right angle to the board. The three M.2 slots can be found just above the first PCIe x1 slot, below the first full-length slot, as well as the second. The top M.2 slot comes with a heatsink and will fit up to a 110mm device, while the other two slots support up to 80mm drives and do not come with a heatsink.

For users that connect chassis and system fans to the board directly, the Gaming 7 has a total of eight fan headers: the CPU fan and CPU_Opt are located by the socket between the DIMM slots and the VRM heatsink; Across the bottom are three system fan headers with a fourth hiding at the end of the top M.2 slot behind the rear I/O audio; the eighth fan header is located in the top right corner of the board. All headers are hybrid and can be controlled by PWM or voltage using the RGB Fusion software.

Audio is driven by the Realtek ALC1220 codec and uses an ESS Sabre DAC, Nichicon caps, and WIMA audio caps in an effort to improve headphone output. The Gaming 7 has dual NICs, using the Rivet Networks Killer E2500 controller alongside the Intel I219V. There is no Wi-Fi, which is perhaps an interesting omission on a flagship board - however the Gaming 5 does have WiFi. Thunderbolt 3 connectivity is maintained on the Gaming 7 with the header located in the bottom right-hand corner above the front panel headers. 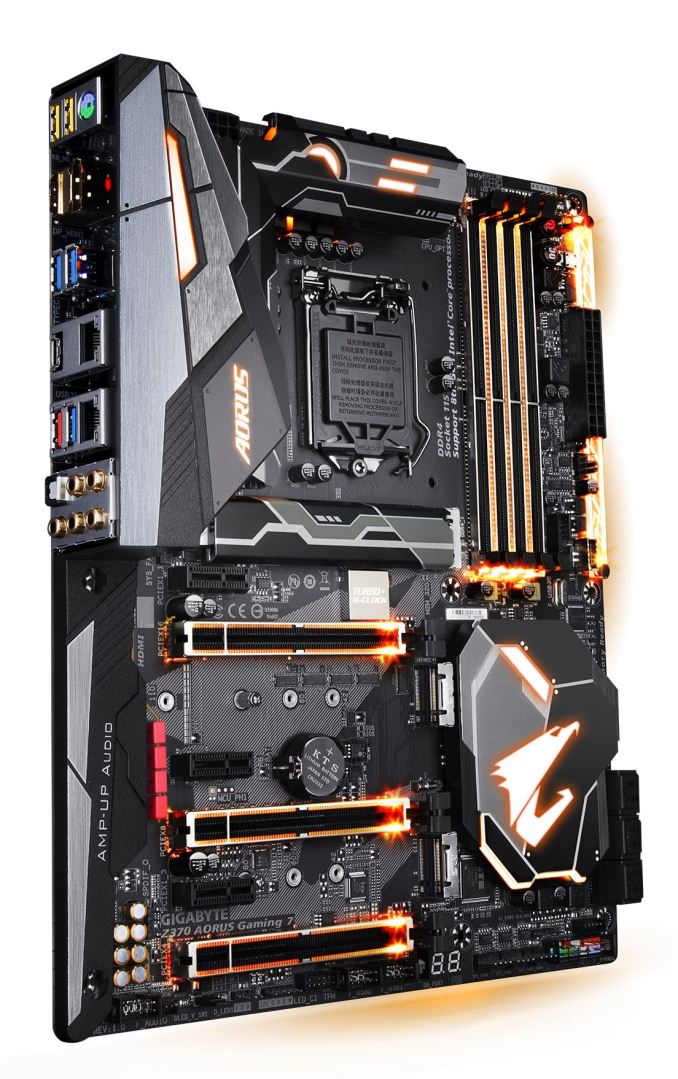 USB support is a bit different here than the other GIGABYTE boards. The Gaming 7 has USB3.1 (10 Gbps) Type-C and Type-A headers on the rear I/O but also add a Type-C header for the front. USB3.1 (5 Gbps) shows a header for the front and five ports on the rear. The rear I/O is a bit more sparse without Wi-Fi, but it still includes Displayport and HDMI outputs for video, the two NICs, five USB 5 Gbps Type-A ports, and the two USB 3.1 (10 Gbps) ports (Type-A and Type-C).

The Gaming 7 comes with everything most users need including a lot of RGB LEDs and adds features such as a reinforced third PCIe slot, a Killer E2500 NIC, onboard Power/Reset/OC buttons, and improved headphone audio. About the only thing missing is Wi-Fi which could also be added via an add-in card.