We were immediately impressed with the amount and quality of the software bundled with the drive. Nu Tech bundled almost the entire Sonic suite, including MyDVD, CinePlayer, SimpleBackup and RecordNow (with Sonic DLA). One 4X DVD+RW was also included. 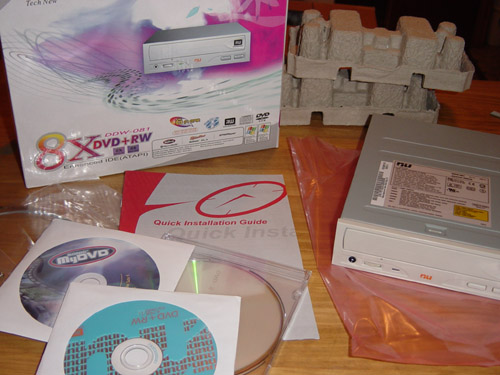 As mentioned in previous reviews, we tend to favor Ahead's Nero with DVD/CDR combo drives, simply because of Nero's established name in the CDR sector. RecordNow is capable of just about as many CDR features as Nero, although we still feel a little disappointed. However, for DVD burning, Sonic MyDVD is a fairly strong suite.

Documentation with the drive was a little light, with only a quick installation guide of 11 pages (virtually all of which were related to installing and using Sonic products). One thing that slightly bothered us was the lack of documentation that listed exact specifications for the drive. Later, it was revealed to us that the 3rd revision firmware (BX03) upgrades the drive calibration to 40X CDR speeds, so the absence of bundled specifications was most likely because the drive's capabilities were not fully programmed at the time of production. 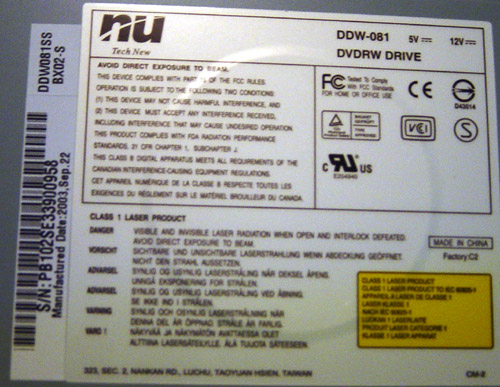 We have yet to see many DVDR drives with a lot of style, so the DDW-081's Spartan white finish and hard edges were no surprise to us. The industry standard play and eject buttons were oriented on the right, with headphone jacks and volume control on the left. The LED interface is also fairly straightforward — a blinking green LED denotes loading, solid LED for reading, and solid red for writing. We were a little dissatisfied that the intensity of this red/green LED is not very bright, and even in a dark environment, it can be a little hard to see.


The DDW-081 did not come with any intake or exhaust holes. You may recall that most drives at least have some exhaust ventilation, and even in the case of Pioneer's 107/106 drives, there are intakes in the front of the unit as well. In our opinion, less places for dust to get in the drive is probably better.