Construction — Under the Hood

The Inspiron 8600 may use a Pentium-M processor and Centrino technology, but it is nevertheless powerful. Our system came configured with a Pentium-M 1.7GHz, the Intel 855PM chipset, 512MB DDR PC2700 memory, wireless connectivity, a 60GB 7200RPM hard drive, a DVD+RW drive, and NVIDIA GeForce FX Go5650 graphics.

It wasn't too surprising to see Dell choose the 1.7GHz Pentium-M, the fastest Pentium-M on the market. The 8600 is meant to be a powerful notebook, and since it uses Centrino technology, it was expected to see Dell scale to the highest end of available options. 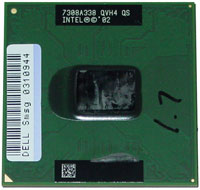 
The processor is housed in a molex socket specifically designed for the Intel Pentium-M processor, since it doesn't use the same pin configuration as other processors.

The CPU is cooled via a fairly hefty heatsink and fan combination, in comparison to other notebooks we have seen. The surface of the CPU connects to the heatsink surface via some sort of thermal compound, which is connected to the heatsink via a large copper heatpipe. The surface of the heatsink is cooled by the user accessible CPU fan, which we mentioned previously. The fan that the 8600 employs is larger than ones we have seen in others notebooks. The size could be a result of the fact that Dell had a lot of space with which to work, perhaps a cautious thermal design, or even a cautious user accessible design. We aren't quite sure exactly why, at the moment.

Like the rest of the Centrino notebooks without integrated graphics, the Inspiron 8600 uses the Intel 855PM chipset, which still happens to be the only chipset available for this purpose. The northbridge is located on the top of the motherboard and the southbridge on the bottom.

Like the Latitude D800 and other similar Dell notebooks, the Inspiron 8600 uses a modular graphics system. This means that the video chip, video memory, and video BIOS all reside on a separate PCB that interfaces with the motherboard via a riser. Currently, the 8600 is default configured with ATI's Mobility Radeon 9000 with 32MB. For the D800, it comes limited to the NVIDIA GeForce4 4200 Go, which obliterated the comparable competition. Our sample came with NVIDIA GeForce FX Go5650, which is the flip chip version of the GeForce FX Go5600. (Read more information here.) With DX8 games, the GeForce FX Go5600/Go5650 (NV31M) is competitive with the competition, namely ATI's Mobility Radeon 9600 (M10). However, when we switch to DX9, the story changes dramatically. In our Mobility Radeon 9600 and GeForce FX Go5650 review, we found the Mobility Radeon 9600 to lead the pack by a significant margin in full precision DX9, just a little over 400% in heavy pixel shader titles. At the moment, we are not aware of Dell offering Mobility Radeon 9600 for the Inspiron 8600, and we will discuss this further in the conclusion. We should also note that this is the first mainstream notebook to use the GeForce FX Go5600/Go5650, which was brought to market 5 months after NVIDIA's announcement, and we would have liked to have seen the time to market a bit closer to announcement.

The cooling system for the module graphics card is actually made up of two parts. The first is a heatsink, which covers the mobile graphics processor and two of the memory chips. The other covers the other two memory chips on the back and is the buffer between the module and northbridge. The exhaust vent that is situated in the gap between the monitor and the system is for this purpose. Air is drawn from the left and it passes over the graphics processor, video memory, the northbridge and then out of the system via the exhaust vent.


All of the system components are located on the system's motherboard, which is shown below. Also shown in the picture is the Broadcom BCM4401KFB Gigabit ethernet controller, which offers 10/100 ethernet support. 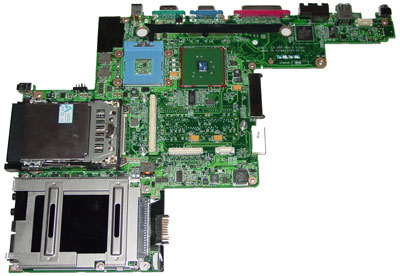