By contrast to the comparison between the two ASRock motherboards, ASUS has positioned their first two products further apart from each other. The Prime X399-A is aimed more at an entry into X399, although the ‘entry’ moniker might be misleading: these X399 motherboards are still being stacked to the hilt in functionality even for the ‘cheaper’ models.

The ASUS Prime X399-A follows previous Prime-A products in a white/grey styling, using a brushed metal and angled design across the heatsinks and PCB to show that this motherboard means business (or something like that). The key features of the Prime X399-A are going to be the extended power delivery heatsink arrangement, U.2 and M.2 storage support, ASUS’ upgrade to the Realtek audio and RGB support. 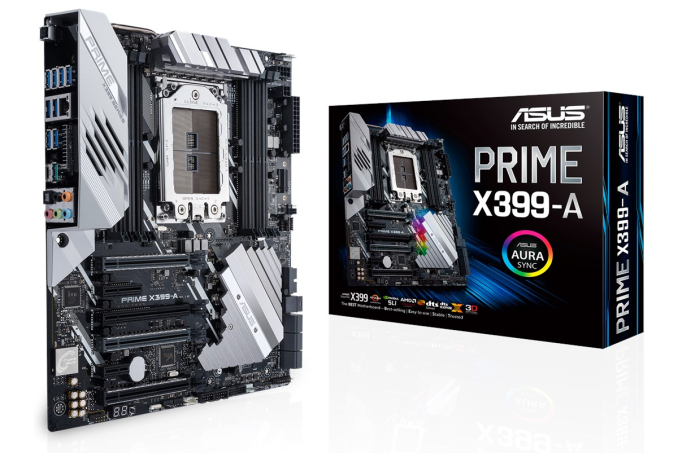 The baseline specifications for the majority of Threadripper boards are here: a full complement of 8 DIMMs for memory, a good set of PCIe slots for multiple-add in cards, SATA storage, Ethernet and USB 3.1 (10 Gbps) support. ASUS, by comparison to the ROG Zenith, has stripped this model down: there’s only one Ethernet port, no WiFi, only two M.2 slots, fewer USB ports (but still over a dozen), and fewer PCIe slots with reinforcement. Threadripper is a high-end product, so doing a complete strip down to the bare essentials negates the high-end aspect of the platform. Perhaps a surprise over the ROG is that the Prime-A has a two-digit LED debug, while the ROG does not.

Going through the board in detail, starting at the top, is the VRM arrangement. This is an eight-phase design, with a dual connected heatsink reaching around the memory slots to the rear panel, which has a small 40mm fan. On the other side of the socket, ASUS has placed both EPS connectors (one 8-pin, one 4-pin) on the top right of the board with the 24-pin ATX connector directly below. While this area is where ASUS normally places some of its more esoteric features, such as PCIe slot disabling switches, there is no need to here. Perhaps a little strange to most will be the placement of the M.2 slot underneath the 24-pin, which requires the M.2 be placed ‘standing-up’ and out of the board. ASUS provides an M.2 bracket to assist in rigidity here. 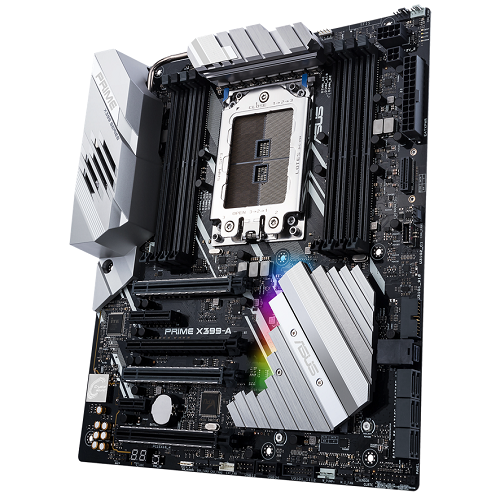 Below the M.2 is the onboard USB 3.1 (10 Gbps) header from the chipset, which is slowly becoming adopted as the onboard standard, with a small number of chassis manufacturers adopting it for adding front-panel ports. This is followed by one of the two USB 3.0 headers, a U.2 port, and six SATA ports.

The chipset heatsink, as shown by the RGB on the picture, houses a few LEDs to adjust the aesthetic through the onboard AURA SYNC software. The heatsink also houses an M.2 slot, like the ROG, and helps provide additional cooling for it if needed.

To the left of the chipset are the PCIe slots. In order to save some cost and provide a little bit of product differentiation, ASUS has decided to only equip three of the full-length slots with a reinforcement guard, although all four full-length slots are connected to the CPU. The full length slots are provided as x16/x8/x16/x8, and when users equip multiple graphics cards, the slots with the reinforcement guard are the best ones to use. The one without the guard is not worse in any way, however in a two or three card system, using x16/x16 or x16/x16/x8 is usually preferred to x16/x8 or x16/x8/x8 due to the slot spacing arrangement. There is an additional PCIe 2.0 x4 from the chipset present as well.

Below the PCIe slots are the onboard headers, including USB 3.0 headers, fan headers, RGB LED headers and a two-digit debug. This is also paired with a power button to test the motherboard when a hand is in the case but the case is not hooked up. To the right of this is the onboard audio, to which ASUS uses their customized version of the Realtek ALC1220. This is combined with upgraded filter caps, PCB separation, an EMI shield and a DTS software stack.

The rear panel, due to the positioning of the board, might look a little bare compared to the ROG. There is the BIOS reset button, a total of eight USB 3.0 ports, the gigabit Ethernet port provided via the Intel I211-AT controller, a USB 3.1 Type-A port and Type-C port from an ASMedia controller, and the audio jacks with SPDIF output.