It feels like we’ve been waiting a long time to see the smaller Pascal cards come to notebooks. The larger GTX 1080, 1070, and 1060, all debuted almost a year ago, but it wasn’t until CES this year that the smaller GTX 1050 was made available to notebook manufacturers.

There’s a lot of upgrades from the outgoing GTX 960M available in the previous XPS 15 thanks to the new Pascal architecture. GP107 offers the same 640 CUDA cores, 40 Texture Units, and 16 ROPs as the GTX 960M, but it offers much higher core, boost, and memory clocks. Dell outfitted the XPS 15 with the 2 GB GTX 960M on the last generation, but they’ve equipped the latest model with the 4 GB model as well. For a full breakdown on the changes, check out our launch article for the GTX 1050 for notebooks.

While the GTX 960M was adequate for light gaming, the GTX 1050 should offer much better performance around the 1920x1080 resolution, but to see the difference, the laptop was run through our full gaming tests. The performance comparisons are against the same systems as the previous tests for system performance. The Razer Blade Pro is outfitted with a GTX 1080 GPU, and the ASUS GL502VS features a GTX 1070, so both of those, being gaming systems, are going to have an advantage, but they are included just to see how big the delta is.

First up, the synthetics: 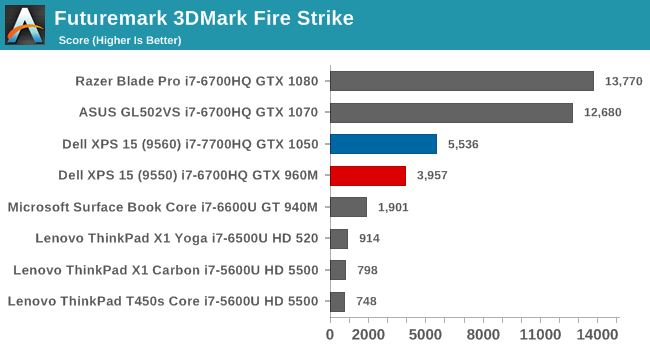 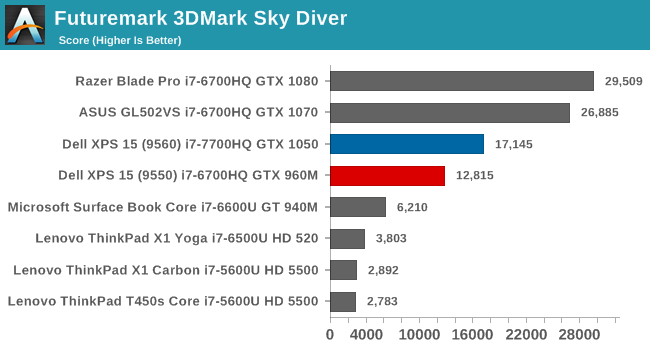 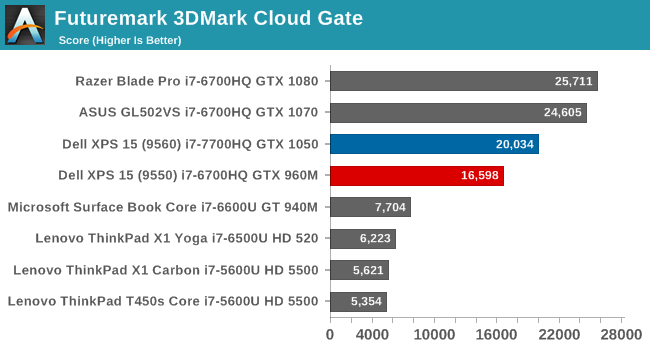 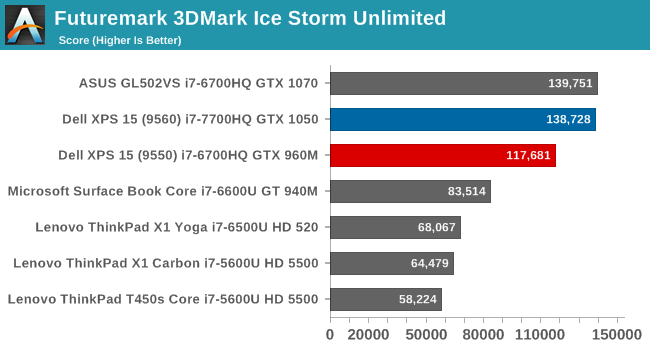 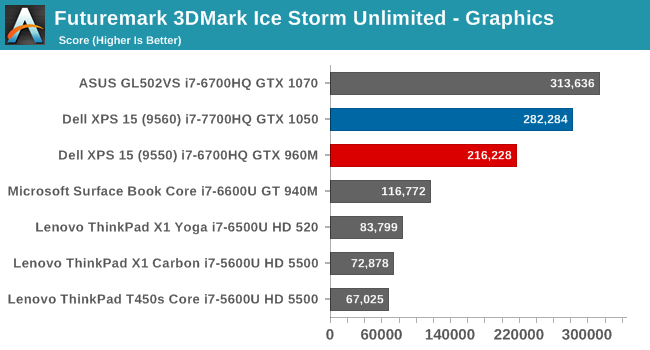 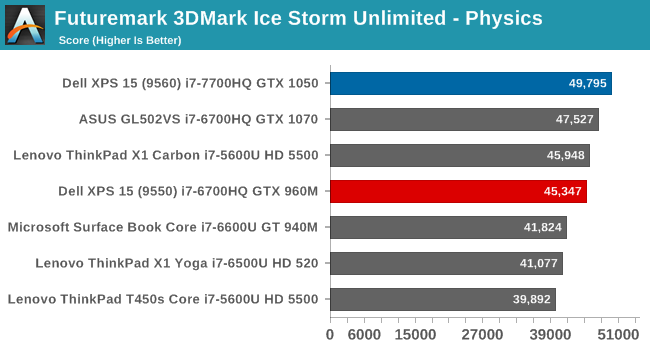 The latest version of 3DMark continues to evolve with new tests, in order to keep it current with systems of today. Fire Strike is the most graphically demanding test in our results, followed by Sky Diver, Cloud Gate, and then the mobile focused Ice Storm Extreme. It’s clear the GTX 1050 is a step ahead of the GTX 960M when looking at these tests, with the new XPS 15 showing a substantial improvement over the outgoing model. Yes, it’s a long way from the bigger GTX 1070 and GTX 1080 notebooks, but the new Pascal card outperforms the Maxwell version by 39.9% on Fire Strike, 33.8% on Sky Diver, 20.7% on Cloud Gate, and 17.9% on Ice Storm Extreme. The more demanding the task, the bigger the gain is as well. 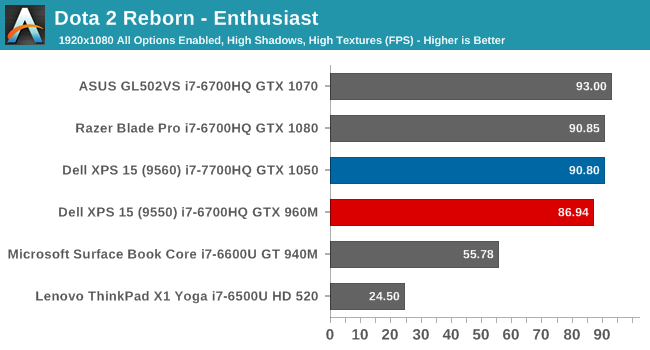 Valve’s online battle arena game is one that’s well suited to even low-end systems, so it’s not surprising to see the XPS 15 be CPU bound even at our enthusiast settings. Since this laptop has a UHD display, trying to run Dota 2 at 3840x2160 at max settings only allows for 31.3 FPS, so the card is perfect for 1080p gaming, but doesn’t have the muscle to power UHD games even if they are less demanding. 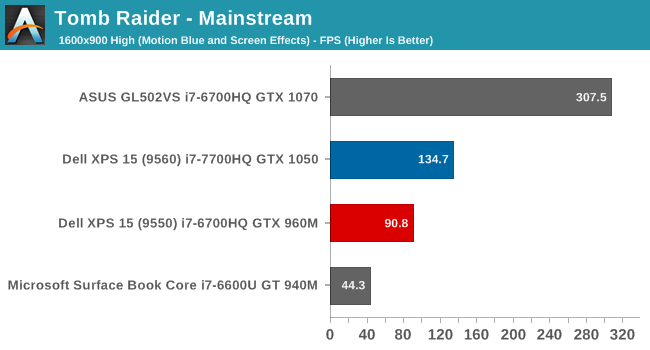 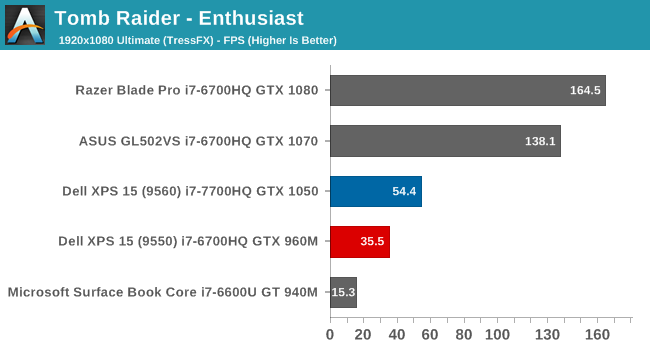 Although several years old now, the original Tomb Raider is still a very demanding game for notebooks, especially when all of the settings are cranked up and TressFX is enabled. At low to mid-settings, the GTX 1050 can easily power this game to multiples of the 60 Hz refresh rate, but at maximum settings, it can’t quite get to the 60 FPS mark. The improvement over the previous generation is an impressive 53.2% increase in performance at the Enthusiast settings.

The latest version of Tomb Raider is even more demanding, and the XPS 15 can only manage to be playable at the mainstream settings.

The latest version of Civilization is as demanding on the CPU as it is fun to play – which means it’s very demanding. Graphics generally takes a back seat here, but with all of the settings maxed out, the performance impact can be substantial. Here we see the GTX 1050 struggle at Enthusiast levels, although on a game like this, 30 FPS is likely adequate. 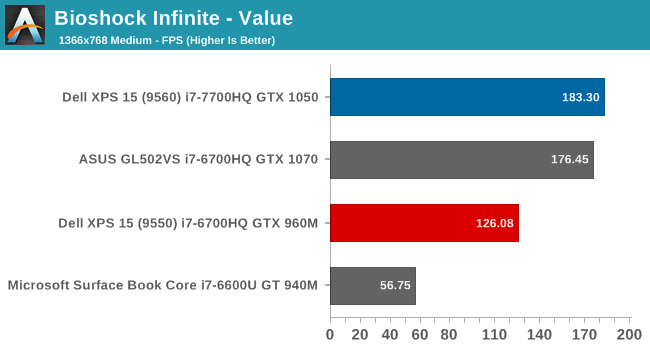 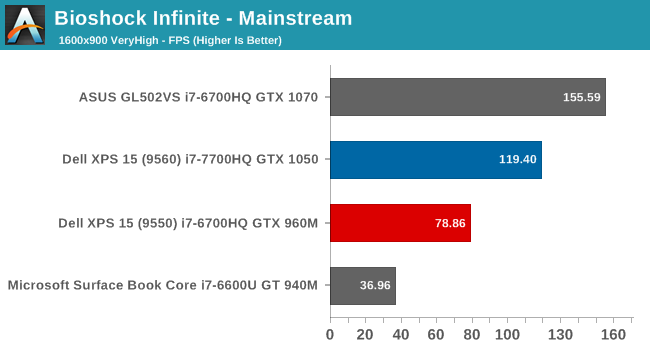 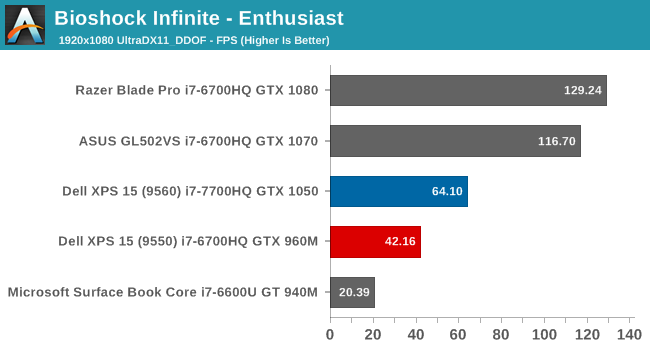 Another legacy game, it’s kept in our tests since we have such a large amount of data to compare this against. At high settings levels, it can still be punishing for notebooks, although the GTX 1050 is the first mid-level notebook GPU to be able to crack the 60 FPS barrier. 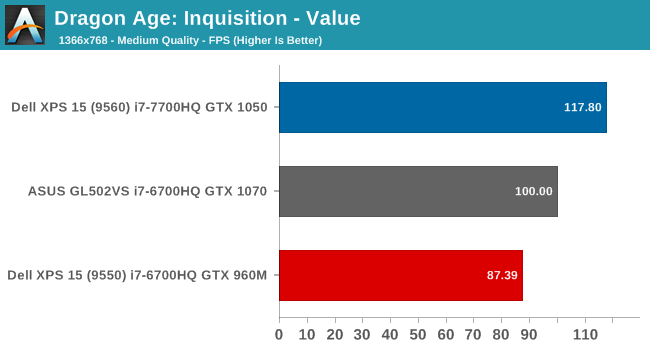 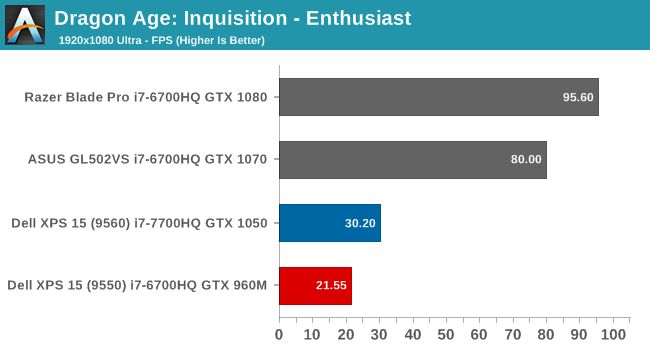 This RPG offers immense worlds, with long sight lines, which can be very taxing on GPUs. The GTX 1050 definitely offers strong performance here compared to the outgoing model, but it still can’t quite handle max settings at 1080p. 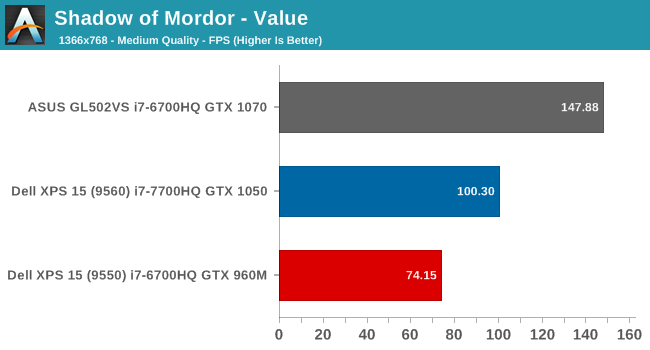 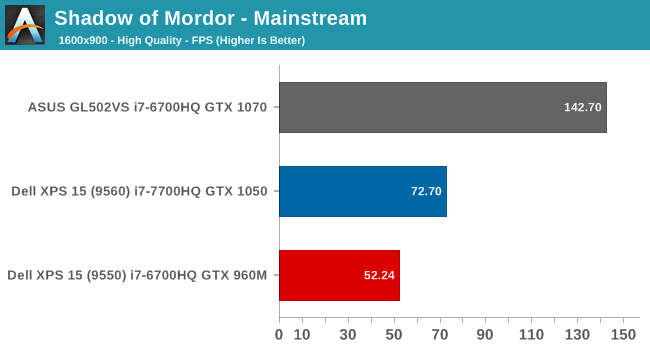 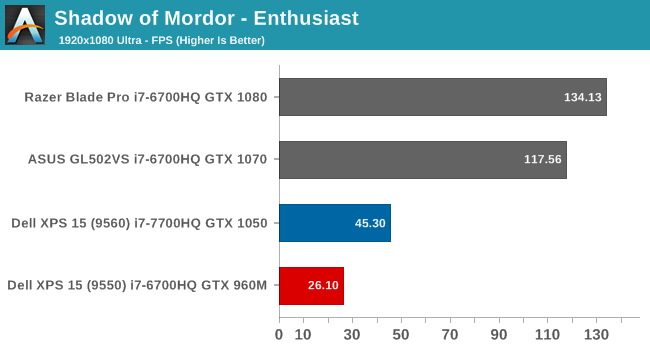 Again, we can see that the GTX 1050 is really a mid-tier card, for light 1080p gaming, or at that resolution with some settings turned down. It’s generally not quite enough to handle this resolution on the more demanding titles.

Switching to Pascal in the XPS 15 has brought with it some very strong improvements in performance. It is common to see it 40-50% faster than the outgoing GTX 960M, but with a similar TDP. NVIDIA doesn’t release official TDP values for its notebook cards, but since Dell hasn’t increased the weight or noise with the new XPS 15, it’s very likely the GTX 1050 is very close to the GTX 960M’s power requirements. We’re likely not to see this kind of jump in performance for a while again, but it’s still fascinating to see just what an increase in performance NVIDIA was able to achieve by moving from an old 28 nm process for Maxwell, to the 14nm process used for GP107.