The Microsoft Build 2017 Recap: What To Expect When You’re Expecting Windows

Windows has never had a color management system to speak of, although individual developers could create their own. That did happen, but it was generally reserved for applications for media creation from companies like Adobe. With the increase in wide color gamut (WCG) devices, we’ve had some concern that this is going to continue to be an issue going forward.

Luckily this is a problem that Microsoft has been aware of for some time, and wider color gamuts, along with the introduction of high dynamic range (HDR) on televisions and displays are pressuring them to come up with a solution sooner than later. Luckily, they have made some progress here, and we were able to discuss this with Kam VedBrat, Partner Group Program Manager, and Simon Tao, Program Manager II from Microsoft to get their take on where they are at now, and where they are going.

Simon Tao has a presentation on Channel 9, and if you’re interested in this, check out his video here.

First off, we discussed where Microsoft is at now with HDR and WCG support, and their first step into this realm was actually with the Xbox One S, which launched in mid-2016. With the more constrained environment, they were able to add in new display capabilities with a known hardware pipeline. This allowed them to work closely with their content providers as well to enable HDR support in their apps. When you think about it, this makes a lot of sense, and it’s a great advantage to now have the Xbox running Windows 10 so they can use it for specific use cases like this.

Kam and Simon also discussed how the new Windows development cycle is a much better process for them, because adding HDR and WCG support into Windows is a huge undertaking. In the old method of Windows updates every couple of years, they would have been forced to add most or all of their code in one round, and if you had missed your timeline, that could mean a long wait until Windows was updated again. With the new servicing model though, they can be much more staggered in their approach, adding code that is ready now, and then learning from that code running on real machines to guide changes and adjustments for the next wave.

Creators Update actually shipped the first steps towards a high color aware OS, although it is limited to certain hardware configurations at the moment. That shouldn’t be a huge issue though, since there aren’t a lot of HDR monitors on the market yet.

With the Creators Update, Windows now has the ability to remap sRGB content into FP16 half-floats, which can then be tone-mapped from FP16 to lower precision for the final output depending on the displays capabilities. This also includes luminance which is important with HDR displays that can high much higher levels of brightness. HDR is not to make everything brighter, but to improve highlights and created a wider range of brightness levels from absolute black to the highest brightness.

For now, this is mainly being targeted towards game developers so they can use the hardware to its maximum potential, and have their product fulfill their artistic goals. But with the Creators Update, other capabilities are already available, including the media pipeline. 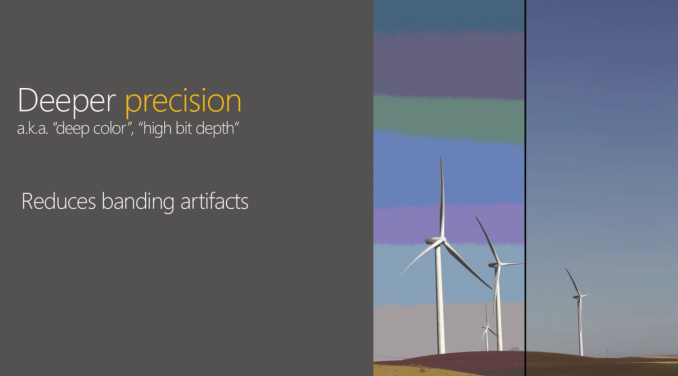 Right now, the onus is on the developer to bring these ideas to market, and to worry about the correct tone mapping based on the display attached to the PC, but the long term goal is to make this available to more developers, or hopefully to even have Windows handle much of this on its own. Having this available in a limited form right now though lets the team get valuable feedback from not just users, but developers as well, to see where they need to make changes. There’s still a long way to go for this to be fully implemented, but with Windows being updated twice per year now, there will be lots of chances to see this evolve and come to life.