To find out, we’ll run them through our standard suite of battery tests. To make the tests accurate and repeatable, we control as many variables as possible, including minimizing background tasks and calibrating each display to 200 nits at 100% APL. 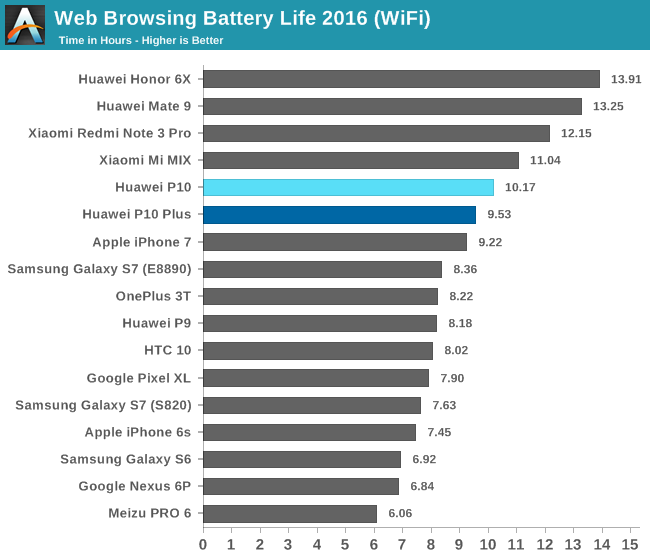 The P10 does quite well in our Wi-Fi browsing test that loads, pauses, and then scrolls through a set of popular websites while connected to Wi-Fi with the cellular radio turned off. Its 10 hours of screen on time is a 2 hour improvement on the P9. It definitely looks like Huawei has shaved power consumption from other components, because this increase is larger than what the bigger battery alone can explain. The P10 Plus uses more power on average than the P10 and its smaller, lower-resolution display, giving it just under 10 hours of screen on time in this test, which is still better than competing phones such as the Galaxy S7, OnePlus 3T, and Google Pixel XL. 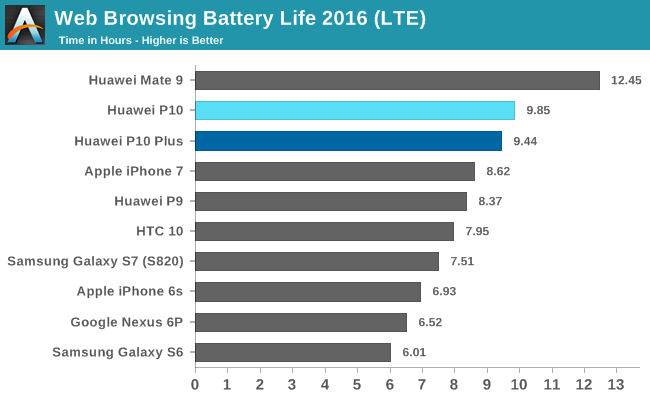 When using the cellular radio instead of Wi-Fi, the P10 once again lasts longer than the P10 Plus. The average platform power consumption (which is extrapolated from total runtime and battery capacity) is once again very similar between the P10 and Mate 9, with the P10 using 276-300mW less power on average than the P10 Plus. 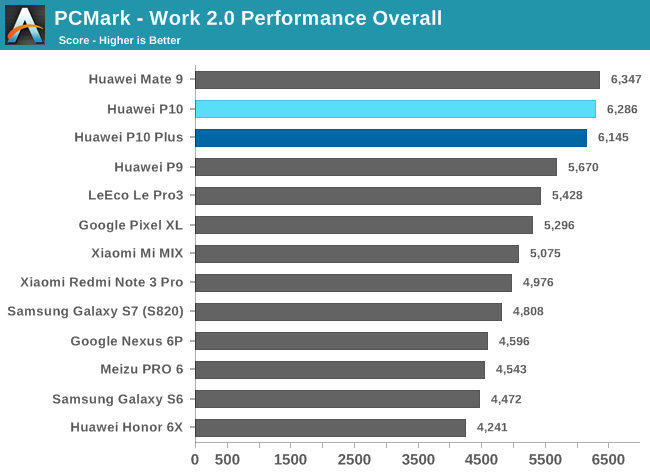 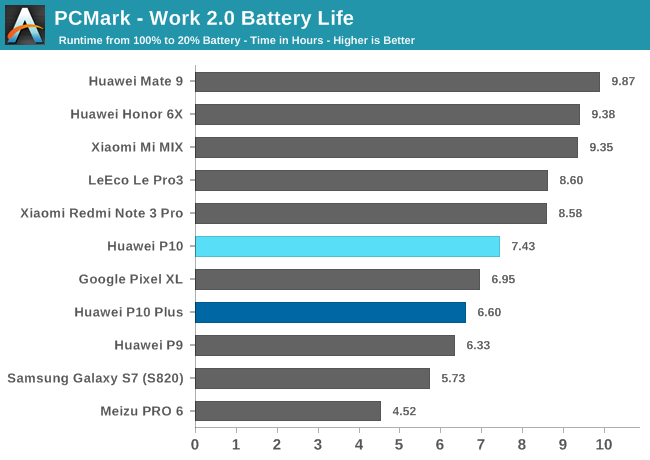 PCMark’s mixture of everyday workloads make better use of the CPU, GPU, and memory subsystems than our browsing battery life tests, which are still mostly limited by the power consumption of the display. With more work to do—and more frequent use of the big CPU cores and the GPU—the P10’s screen on time drops to just under 7.5 hours, a 1 hour improvement over the P9 and still a little longer than the Pixel XL. The P10 Plus only manages 6.6 hours, a far cry from the Mate 9’s nearly 10 hour duration. The Mate 9’s battery is only about 7% larger, but it lasts 50% longer in this test. Part of this difference is because of the particular Kirin 960 SoC in our P10 Plus sample, which draws more power than the parts in the P10 and Mate 9 (so a worse bin). 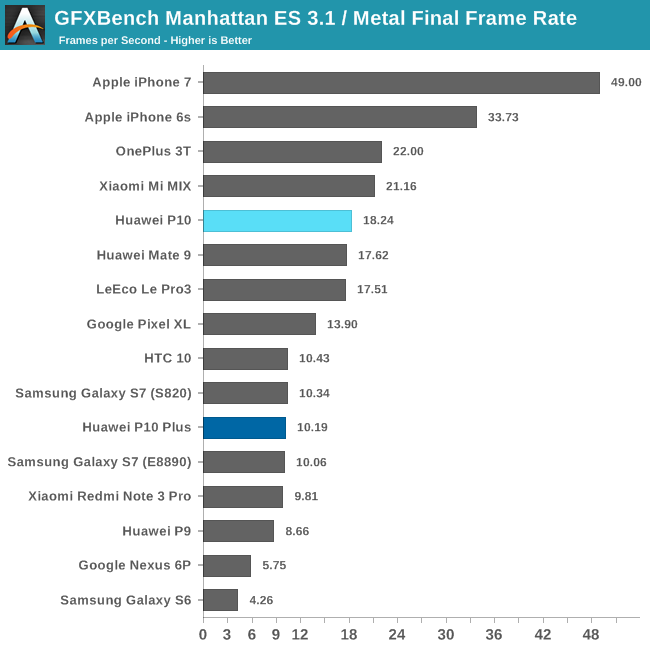 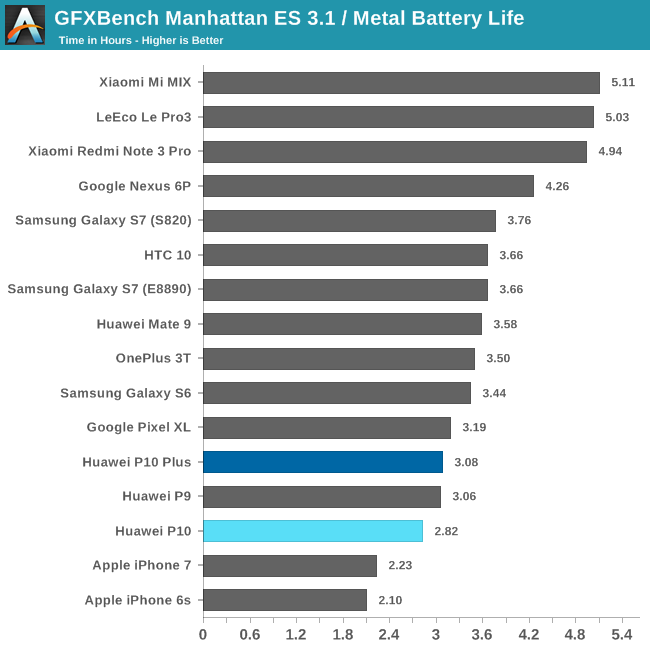 Most of the current flagship phones last around 3.5 hours when playing a game simulation like Manhattan ES 3.1, maybe a little longer if they have a larger-than-average battery. The P10 Plus only manages about 3 hours, the same as the P9, however. The smaller P10 dies about 15 minutes sooner, which is not a great result. 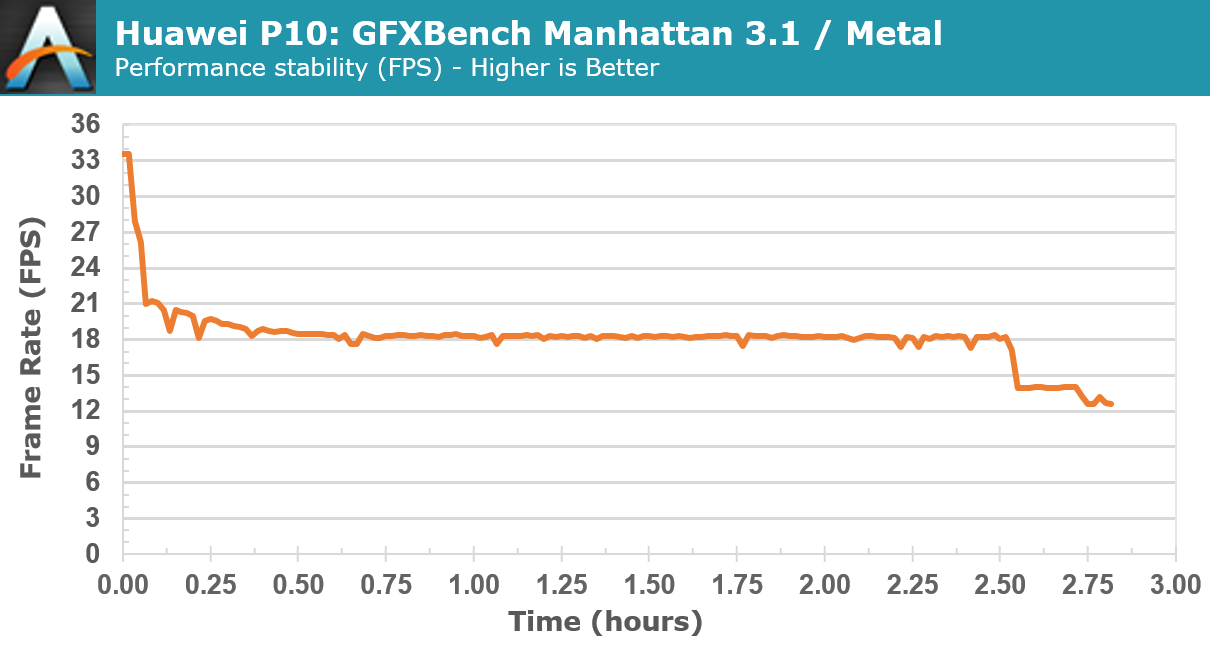 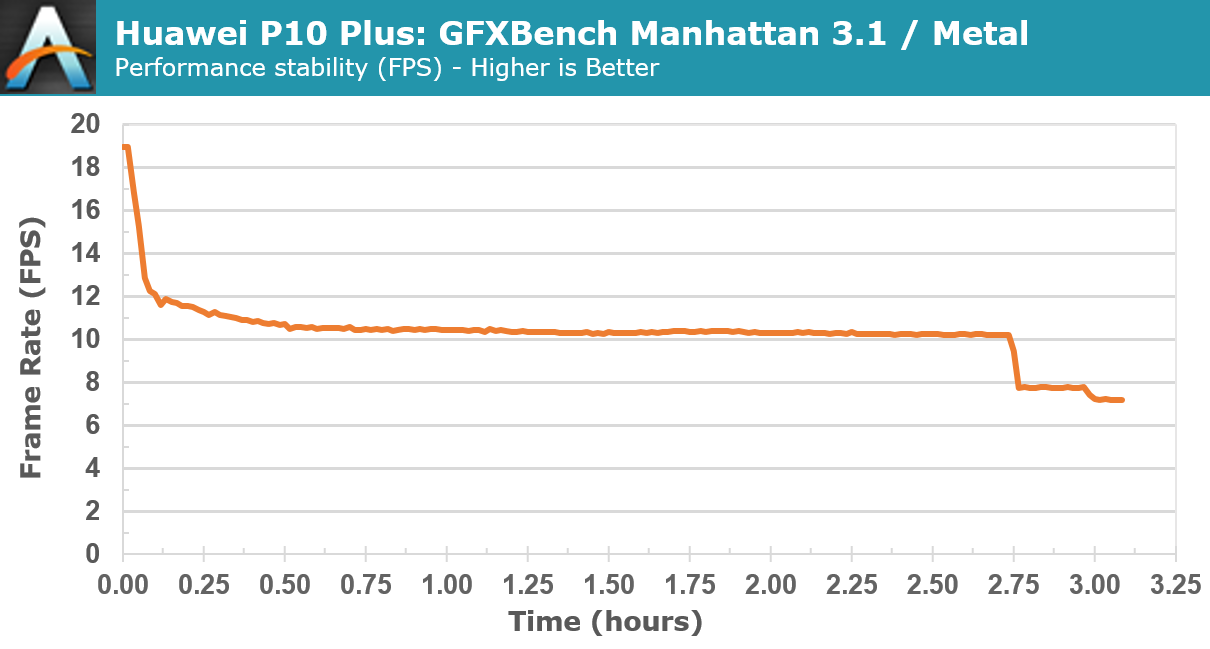 The 1037MHz peak operating point Huawei uses for the Mali-G71MP8 GPU in the P10, P10 Plus, and Mate 9 is intended primarily for boosting benchmark scores and is not sustainable. All three phones only maintain peak performance levels for 1 minute (which just happens to be how long most graphics benchmarks last) before they begin reducing GPU frequency to avoid overheating. The P10 drops to 21fps after only 4 minutes, a 37% reduction relative to the peak value, before reaching equilibrium after about 30 minutes at around 18.3fps. This behavior is almost exactly the same as the Mate 9, except it drops to 21fps after 8 minutes and maintains 19fps afterwards, probably because its larger chassis can dissipate more heat. The P10 Plus also loses about 38% of its performance after 8 minutes.

The P10’s and Mate 9’s sustained performance is as good as or better than phones using Qualcomm’s Snapdragon 820/821 SoCs, though. The Moto Z Force Droid, with a newer GPU driver, can sustain a peak performance of almost 18fps for 12 minutes, gradually reaching a steady-state frame rate of 14.5fps, while the LeEco Pro 3, which uses a Snapdragon 821 SoC, can maintain 19fps after dropping from a peak value of 33fps. The Galaxy S7 edge also experiences a significant 33% drop in performance starting at the 8 minute mark, stabilizing at about 10fps after 31 minutes, similar to the P10 Plus’ 10.3fps when running at the same resolution. 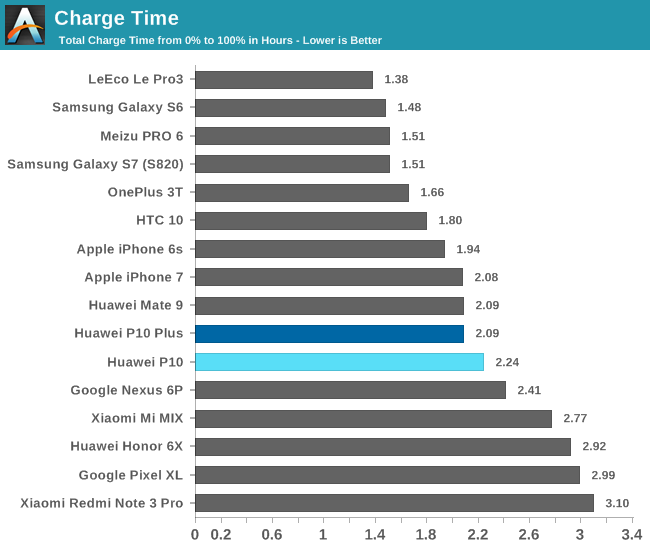 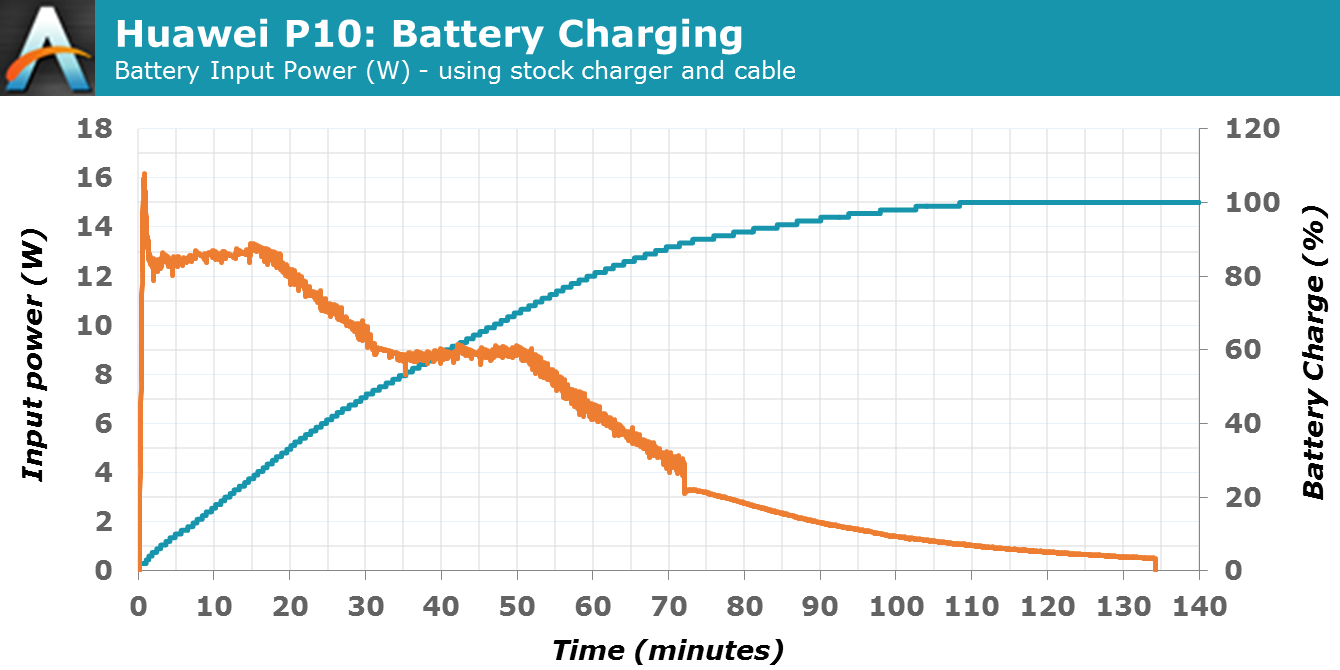 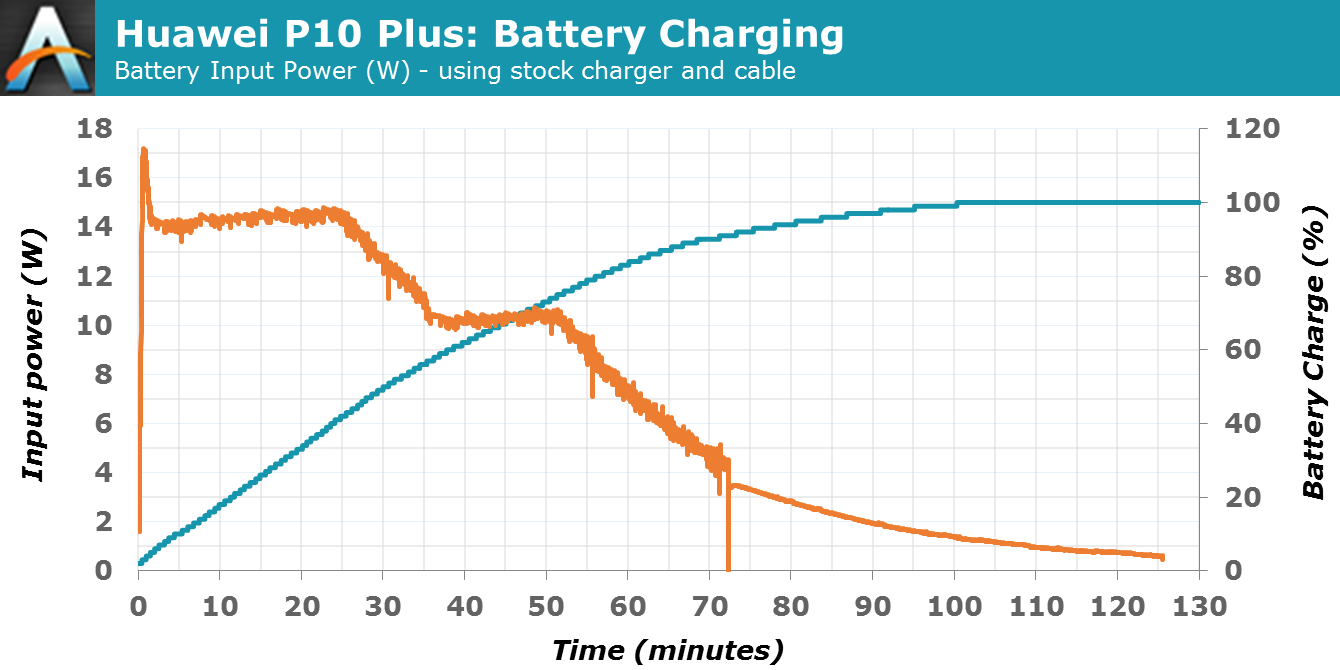 The P10 and P10 Plus include Huawei’s SuperCharge fast-charging technology that includes voltage, current, and temperature protection circuitry. The included wall charger is rated for 5V/2A (10W), 4.5V/5A (22.5W), and 5V/4.5A (22.5W) operation.