One of the stand-out offerings on the A7V600 is the Wi-Fi slot. The slot is an ASUS proprietary design that allows connection of an ASUS wireless networking module. The optional module, when it becomes available, allows 11 Mbps transmission (with a fall-back to 5.5, 2, and 1Mbps) in the 2.4GHz band. 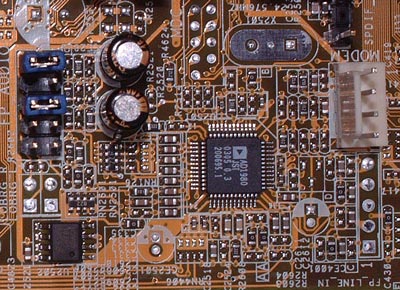 ASUS has included ADI SoundMax audio 5.1 audio on the A7V600. There is also a coaxial SPDIF out port included on the back I/O connections where we would normally see a second serial port. ADI SoundMax is the same audio chip used in ASUS 865/875 high-end motherboards. It is also used by Intel on their 865/875 motherboards. SoundMax is one of the more flexible AC ’97 2.2 compliant sound codecs. With SPDIF included on-board, you also have more quality audio options. ASUS has also provided an onboard connector for an optional second SPDIF adapter with both coax and optical I/O ports. Three mini-jack connections are used for standard audio, but like all 3-jack solutions, a 6-speaker setup will eliminate access to both microphone and line-out jacks by redefining the jacks as speaker connections. VIA would certainly prefer that manufacturers use their excellent VT1616 audio codec. However, with the KT600 so quickly becoming slotted as a value board, it is difficult to fault manufacturers who are looking for cost savings. The ADI SoundMax will be a fine solution for most users, but if you prefer a higher-end audio solution using a PCI audio card, the on-board Audio can be easily disabled. 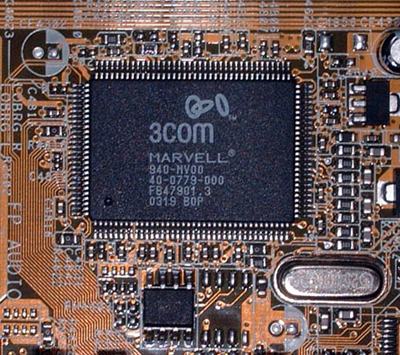 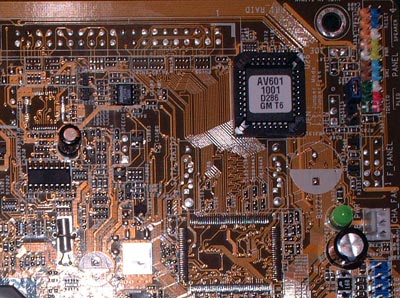 It is surprising that ASUS did not include Firewire on the A7V600. This is likely a feature that also fell victim to last minute cost-cutting, since there are several available positions on the board. ASUS has included their stable of proprietary protection and security solutions, notably:

The A7V600 ports configuration is fairly complete, and includes PS/2 mouse and keyboard ports, one serial port, one coaxial SPDIF jack (in place of the normal second serial port), one parallel port, four USB 2.0 ports, one LAN port, and Mic In, Line In, and Line Out, which drive the onboard sound. There are no Firewire ports, but ASUS does include a game port connection and bracket, which will be important to some.

As with most KT600 motherboards we’ve seen, the ASUS A7V600 has native Serial ATA support courtesy of VIA’s new VT8237 South Bridge. The A7V600 supports RAID 0 (striping for Performance), 1 (Mirroring for security) & JBOD (literally, "Just a Bunch Of Drives"; a technique for Spanning or combining drives so that they appear as one drive). Since only two Serial ATA drives are supported, Raid 0+1, which requires four drives, is not supported. Once again, we find features on the low-priced KT600 boards that are not expected – Serial ATA and Serial ATA RAID. These features are certainly not native on the more expensive nForce2 Ultra 400 motherboards. Serial ATA and SATA RAID are features, however, on the recently introduced Intel 865/875 chipsets from the Pentium 4.

Another nice addition to VIA’s new Southbridge is the increase in V-link speed from 533MB/s to 1066MB/s. This is to keep VIA’s architecture competitive with SiS, who has featured their high-speed Mutiol connection between chipset components. As we said earlier, there is little that goes wanting in VIA’s new South Bridge, except the very important ability to perform at nForce2 Ultra 400 performance levels. The KT600 boards are loaded with up-to-date features, and provide some added value compared to nForce2 motherboards.