Since our Optane Memory sample died after only about a day of testing, we cannot conduct a complete analysis of the product or make any final recommendations. With that said, the early indications from the benchmarks we were able to complete are mostly very positive reflections of the performance of the Intel Optane Memory. 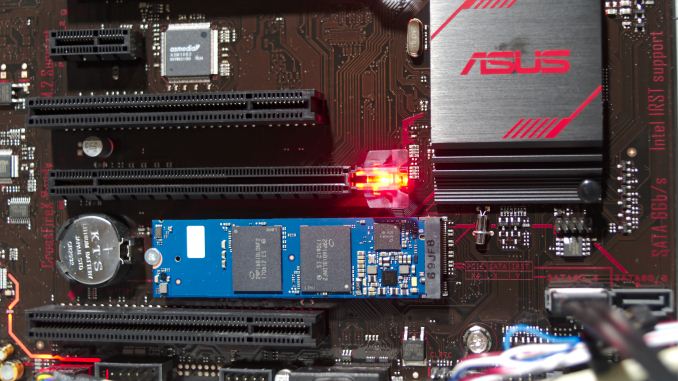 As a cache device, the Optane Memory brought a hard drive-based system's SYSmark scores up to the level of mainstream SSDs. These averages do not capture differences in the latency distributions of the Optane cache+hard drive configuration vs a flash SSD. In the Optane+hard drive configuration, a cache hit will be almost 1000 times faster than a cache miss, resulting in a very bimodal distribution. The flash SSDs mostly occupy the territory between the performance of Optane and of the hard drive. It's possible that a mainstream flash SSD could deliver a user experience with fewer noticeable delays than the Optane caching experience with the occasional inevitable cache miss. Overall, however, the Optane cache delivers a remarkable improvement over just a hard drive, and the 32GB cache capacity we tested is clearly large enough to be of substantial use.

As a standalone drive, the Optane Memory breaks a few records that were set by the Intel Optane SSD DC P4800X enterprise drive just last week. The Optane Memory is more tuned for small transfer sizes and offers even better QD1 random read performance. These differences seem like exactly the right optimizations to make for a drive focused on client workloads. The throughput at higher queue depths is nowhere near what the P4800X delivers and falls behind what more expensive consumer SSDs can offer, but those situations make up a very small portion of client workloads. The first and only batch of synthetic tests we were able to run on the Optane Memory were derived from the enterprise SSD tests used on the Optane SSD DC P4800X, and they cast the consumer flash SSDs in an unrealistically bad light. A typical desktop user has little reason to care how well their SSD handles multiple threads performing sustained sequential transfers on a full drive, so the Optane Memory's stellar performance there should not lead users to prefer an Optane cached hard drive setup over an all solid state configuration.

The one area where we are ready to draw some conclusions is power consumption. We still need to conduct further analysis of the Optane Memory's power use under load, but its idle power situation is simple: the Optane Memory lacks any meaningful power saving mode. It is rated for 1W at idle and that's the lowest we saw it get throughout our short time testing it. 1W is something desktop users can shrug off; a typical gaming desktop dedicates more power than that to decorative LEDs. But Optane Memory is also intended for mobile use, and the first systems announced to offer Optane Memory were Lenovo ThinkPads. Adding a minimum of 1W on top of the power drawn by a mechanical hard drive will not help battery life, no matter how much faster it makes the storage system.

With Optane Memory, Intel seems to finally have the cache device they've been needing for a decade to make SSD caching viable. It's fast in spite of its low capacity, something flash based cache devices could never pull off. Optane Memory is also more affordable at $44 and $77 than Intel's previous cache devices.

With that said, however, I wonder whether it may all be too little, too late. SSD caching has some unavoidable limitations: cold caches, cache evictions when the cache proves too small, and the added complexity of a tiered setup. With those disadvantages, Optane Memory enters a market where the price of flash SSDs means there's already very little reason for consumer machines to use a mechanical hard drive as primary storage. Instead, the best case scenario here appears to be enabling the capacity benefits of tiered storage - offering nimble systems with 1TB+ of cheap storage and is presented to the user as a single drive - but without as many of the drawbacks of earlier NAND-based caches.

In some sense, Optane Memory may just be a stop-gap product for the consumer market until Intel is able to deliver usefully large Optane SSDs for consumers. But those SSDs are likely to arrive with prohibitively high prices if they ship later this year as planned. 3D XPoint memory has arrived and is poised to revolutionize parts of the enterprise storage market, but it may not be ready to have a meaningful impact on the consumer market.