The product brief for the Optane SSD DC P4800X provides a limited set of performance specifications, entirely omitting any standards for sequential throughput. Some latency and throughput targets are provided for 4kB random reads, writes, and a 70/30 mix of reads and writes. 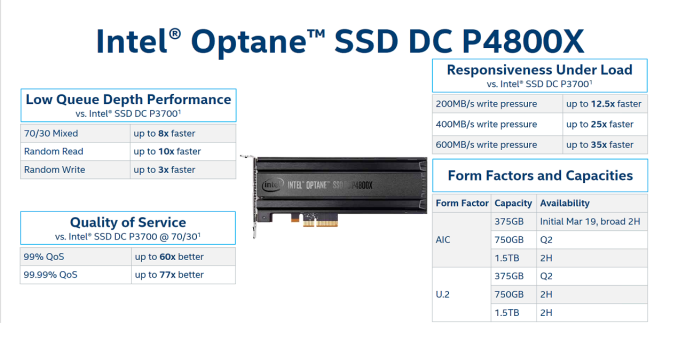 This section has our results for how the Optane SSD measures up to Intel's advertised specifications and how the flash SSDs fare on the same tests. The rest of this review provides deeper analysis of how these drives perform across a range of queue depths, transfer sizes, and read/write mixes.

Intel's queue depth 1 specifications are expressed in terms of latency, and at a throughput specification at QD1 would be redundant. Intel specifies a "typical" latency of less than 10µs, and most QD1 random reads on the Optane SSD take 8 or 9µs; even the 99th percentile latency is still 10µs.

Intel's QD16 random read result is 584.8k IOPS for throughput, which is above the official specification of 550k IOPS by a few percent. The 99.999th percentile latency scores 81µs, significantly under the target of less than 150µs. The flash SSDs are 3-5x slower on most metrics, but 20-30 times slower at the 99.999th percentile for latency.

However it is worth noting that the Optane SSD only manages a passing score when the application uses asynchronous I/O APIs. Using simple synchronous write() system calls pushes the average latency up to 11-12µs.

The Optane SSD DC P4800X is specified for 500k random write IOPS using four threads to provide a total queue depth of 16. In our tests, the Optane SSD scored 556.4k IOPs, exceeding the specification by more than 11%. This equates to a random write throughput of more than 2GB/s.

The flash SSDs are more dependent on the parallelism benefits of higher capacities, and as a result can be slow at the same capacity. Hence in this case the 2.4TB Micron 9100 fares much better than the 800GB Intel P3700. The Micron 9100 hits its own specification right on the nose with 300k IOPS and the Intel P3700 comfortably exceeds its own 90k IOPS specification, although remaining the slowest of the three by far. The Optane SSD stays well below its 200µs limit for 99.999th percentile latency by scoring 147µs, while the flash SSDs have outliers of several milliseconds. Even at the 99th percentile the flash SSDs are 10-20x slower than Optane.

On a 70/30 read/write mix, the Optane SSD DC P4800X scores 505.9k IOPS, which beats the specification of 500k IOPS by 1%. Both of the flash SSDs deliver roughly the same throughput, a little over a quarter of the speed of the Optane SSD. Intel doesn't provide a latency specification for this workload, but the measurements unsurprisingly fall in between the random read and random write results. While low-end consumer SSDs sometimes perform dramatically worse on mixed workloads than on pure read or write workloads, none of these drives have that problem due to their market positioning and capabilities therein.