Starting with voltages, there aren’t any big surprises with the GTX 1080 Ti. The underlying GP102 GPU has the same load voltages as the GP104 GPU in the GTX 1080, resulting in a load voltage of 1.062v.

It is interesting to note though that our GTX 1080 Ti sample has the same maximum boost clock as the GTX 1080: 1898MHz. If the GTX 1080 Ti didn’t hit its thermal limit as often, it likely would come even closer to the GTX 1080 in average clockspeeds. 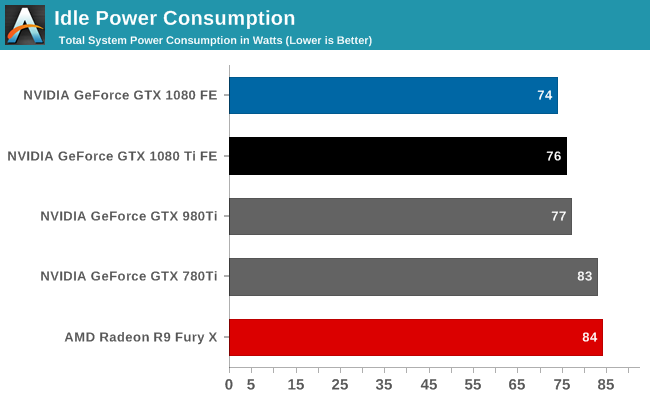 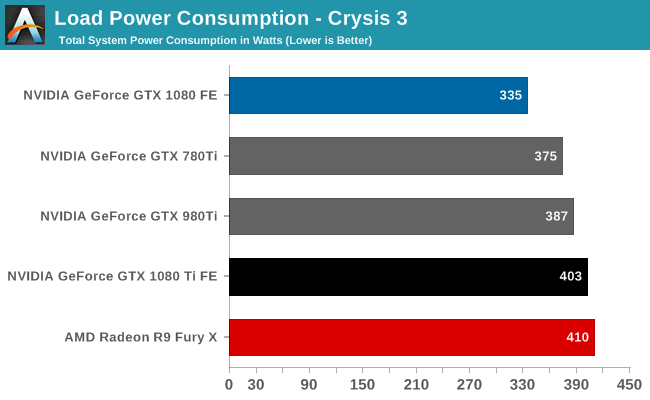 System power consumption under Crysis 3 is also right where we’d expect it to be for the GTX 1080 Ti. In absolute terms it’s second only to the R9 Fury X – which is to say that it’s high – but as Crysis 3 is a real-world test, power numbers here are influenced by the rest of the system. The faster the card, the more work required of the CPU, RAM, etc, and that’s exactly what’s happening here. 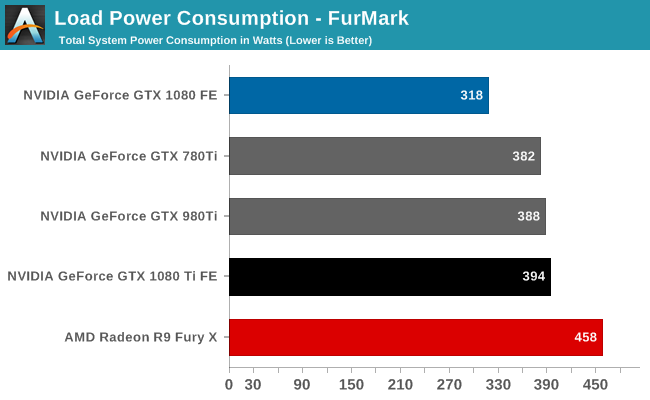 Switching over to FurMark, which is a much more GPU-focused test, we find that our GTX 1080 Ti-equipped testbed draws 394W at the wall. This is a smidge higher than the GTX 980 Ti, but not meaningfully so. All 3 250W NVIDIA cards are closely clustered together, showing that NVIDIA’s power throttling is working as expected, and at the levels expected. GTX 1080 Ti is rated for 70W higher than the GTX 1080, and our results back this rating up. With NVIDIA’s well-established power/performance tiers, GTX 1080 Ti makes the expected leap in power consumption in order to reach its loftier performance target. 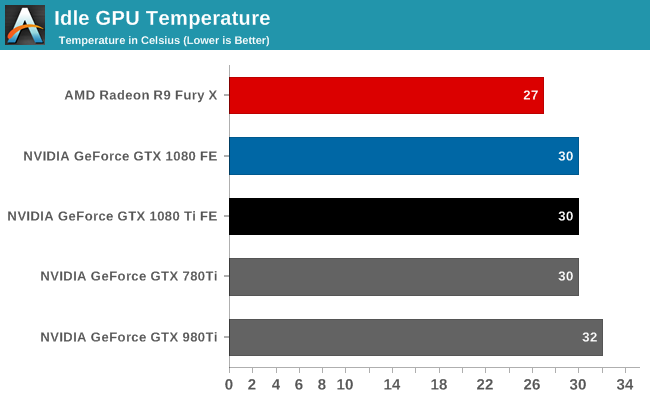 Moving on to temperatures, at idle the GTX 1080 Ti settles at 30C, the same as its siblings. 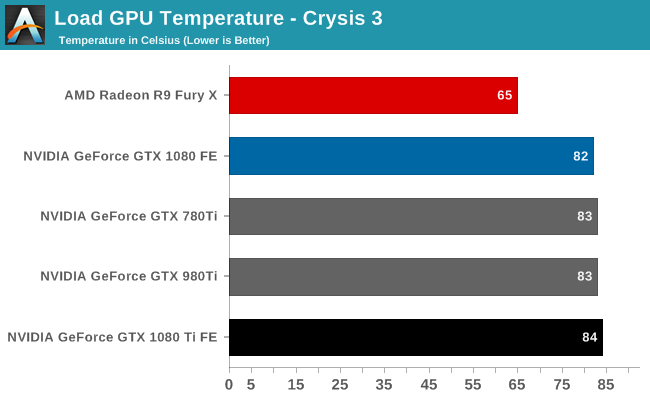 As for Crysis 3, the GTX 1080 Ti ends up being the hottest card here despite the cooling improvements, though it should be noted that this is intentional. While NVIDIA doesn’t publish this information directly, the GTX 1080 Ti’s preset thermal throttle point is 84C, which is a degree or two higher than on NVIDIA’s previous cards. As a result, the card reaches equilibrium at a slightly higher temperature than NVIDIA’s other cards.

It’s interesting to note that the throttle point has been slowly creeping up over the years; going back to the original Titan, it was only 80C. As far as reference specification designs go, the higher temperatures improve the efficiency of the cooler. The downside to higher temperatures is that power leakage increases with the temperature. So there’s a careful balancing act here in getting better cooling performance without drowning it out in more leakage-induced heat. In the case of the GTX 1080 Ti, I suspect NVIDIA paid their dues here with the additional MOSFETs, giving them a bit more headroom for leakage. 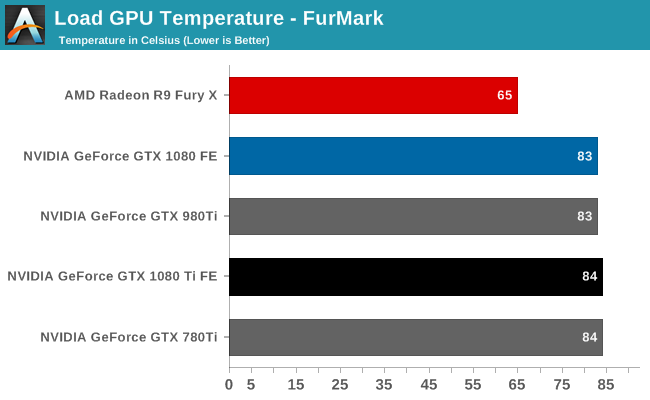 The story is much the same under FurMark. The GTX 1080 Ti settles at 84C here as well – though it did peak at 86C before reaching equilibrium – showcasing that regardless of the workload, the card always levels out at its thermal throttling point. 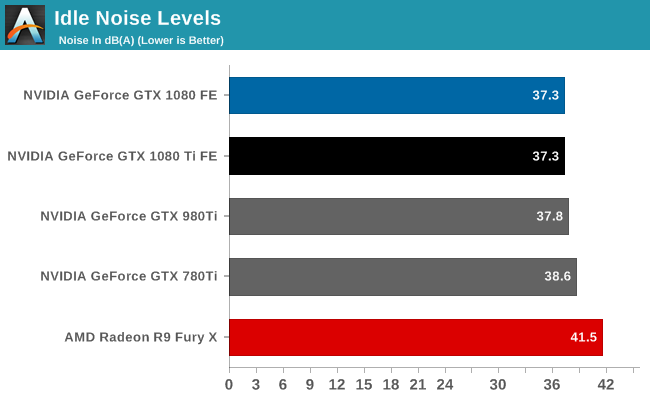 Finally we have our look at noise, starting with idle noise. Relative to the GTX 1080 NVIDIA has tweaked the fan curve a bit here, but at idle the GTX 1080 Ti is already below our noise floor. 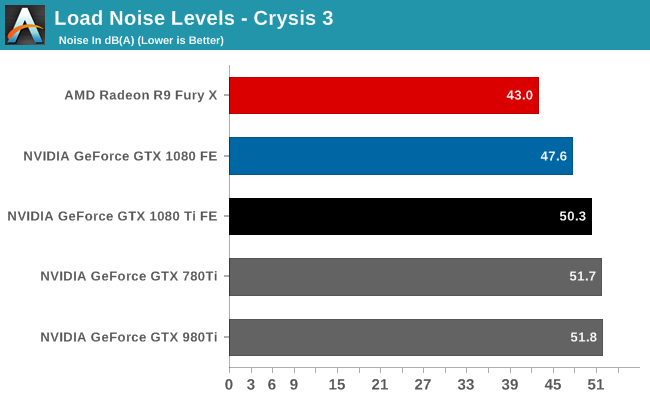 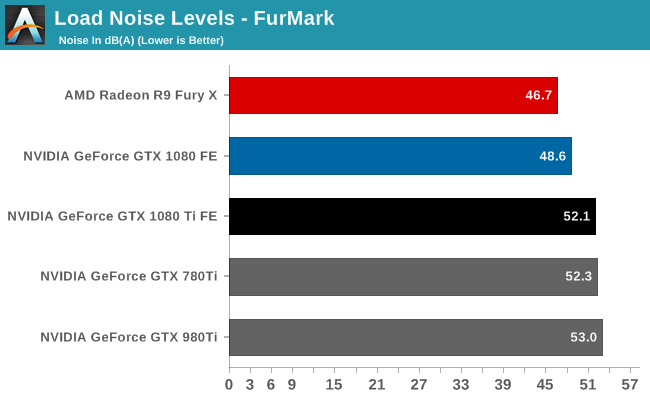 Finally, the situation with FurMark is much the same. The GTX 1080 Ti is still ever so slightly quieter than the other 250W NVIDIA cards, but a few dB louder than the GTX 1080.

Overall, judging from the power and noise characteristics of the GTX 1080 Ti, along with its throttling practices, it looks like NVIDIA invested most of their gains with the improved cooling system in removing more heat from the card itself. With few exceptions, the GTX 1080 Ti thermal throttles before it TDP throttles, and anecdotally, it tends to be closer to its TDP limit than most of the other high-end NVIDIA cards we’ve seen in the past couple of years.

Going back to what NVIDIA said earlier, they are claiming that the GTX 1080 Ti offers the largest performance uplift over its non-TI counterpart. Given that the TDP gap between the GTX 1080 Ti and GTX 1080 is actually smaller than the gap between the GTX 980 Ti and GTX 980 Ti – 70W versus 85W – if anything we’d expect this to be smaller. But by investing their gain from the improved cooler in better heat removal, NVIDIA is actually getting the GTX 1080 Ti closer to its performance/TDP limit than the previous generations of Ti cards. The only downside here is that you can only remove the DVI port once, so this isn’t an act that NVIDIA will be able to repeat in the next generation.