Aesthetically, the Excalibur SE Spectrum is a very simple-looking keyboard. With its plastic body and subtle design it can be easily mistaken for a cheap, typical office keyboard. Its appearance bears more resemblance to the membrane-based Zalman K650WP that we reviewed a few months ago rather than most high-end mechanical keyboards. A closer inspection reveals a well-made plastic body with smooth, comfortable rounded edges covering a white steel plate beneath the keycaps. 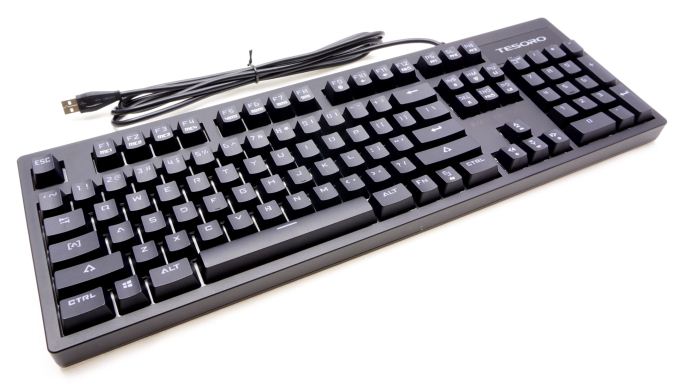 We received the US layout version of the Tesoro Excalibur SE Spectrum. It is a standard 104-key keyboard that does not fully adhere to the ANSI layout, as the bottom row is different to the standard. The bottom row of the keyboard has a 6.0× Spacebar, two 1.5× ALT, two 1.5× CTRL and three 1.0 × WIN/Fn bottom row keys. The standard ANSI layout has a 6.25× Spacebar and seven 1.25× bottom row keys. Tesoro’s approach is supposed to be the “gaming” mechanical keyboard design that favors the “useful” CTRL and ALT keys, while it minimizes the size of the unwanted (and dangerous for the serious gamers) WIN and Menu keys. 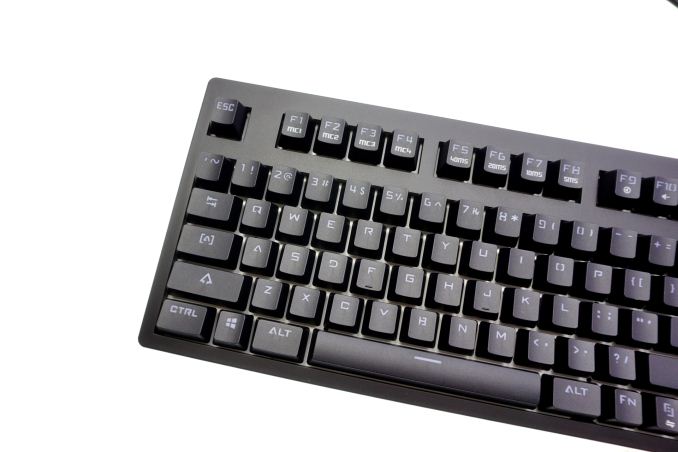 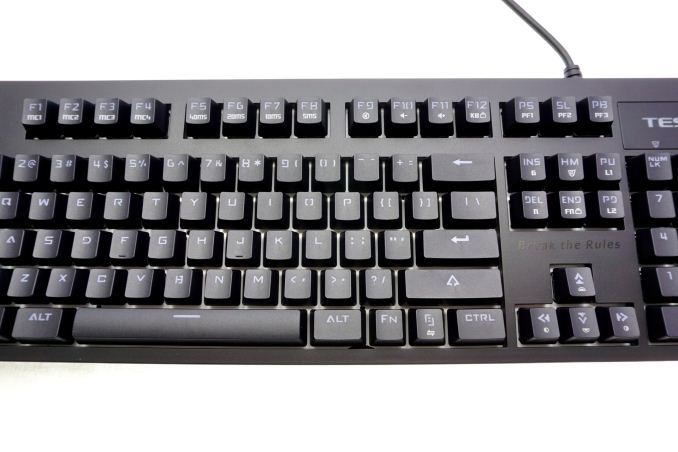 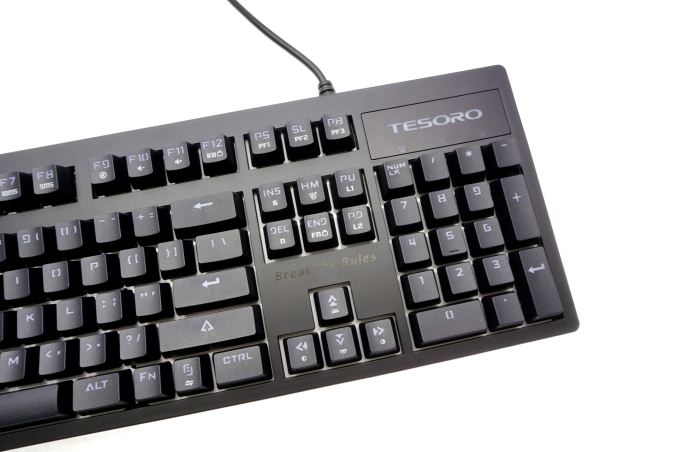 There are no extra keys on the Excalibur SE Spectrum. All the advanced functions are available via keystroke combinations, which are accessible by holding the Fn key and then pressing another key. When the Fn key is being held actuated, the F1 to F4 keys offer access to pre-programmed keystroke macros, the F5 to F8 keys adjust the response rate of the keyboard, the F9 to F11 keys offer basic volume controls, and F12 locks the entire keyboard. Some other interesting FN combinations are present:

There is also a function to reset the entire keyboard and erase all of its user’s programming.

Aside from the phrase “Break the Rules” etched above its arrow keys and the backlit company logo, there are no other extra features or anything special to comment on about the Excalibur SE Spectrum. It has no USB pass-through ports, no extra keys or buttons, or any other features that stand out. It also has no wrist rest, which will be an issue for professionals with a keyboard this tall.

On paper, the Excalibur SE Spectrum features RGB backlighting, but lighting options and effects are very limited. There are actually only seven colors that the user can choose from (blue, red, green, purple, teal, yellow and cold white) and a limited number of pre-programmed effects. Some of the effects are programmable, such as the “message” lighting that lights up a user-defined number of keys in sequence. All programming is performed by keystroke combinations, there is no software package accompanying the Excalibur SE Spectrum. 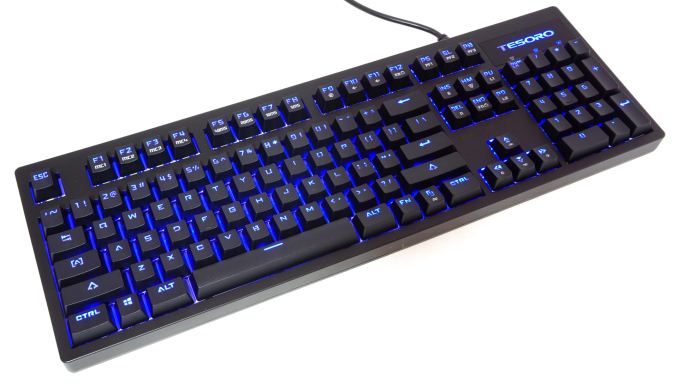 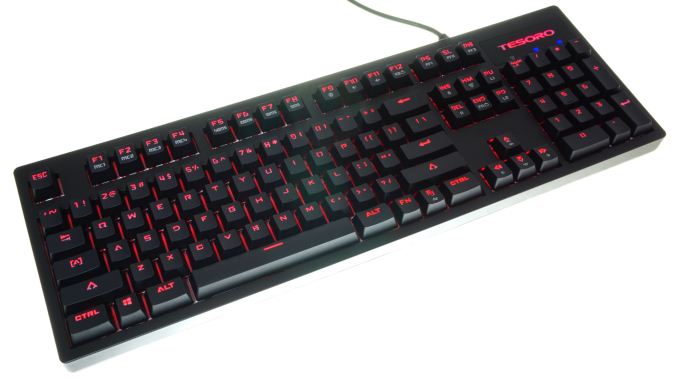 Beneath the keycaps we found the new optical switches that Tesoro is using. These switches were developed in partnership with Gateron, a known manufacturer of mechanical keyboard switches. We will delve more into the design of these switches in the following pages. The top of their body is clear for a better, more even lighting distribution. Costar-type stabilizers can be found beneath the larger keys. 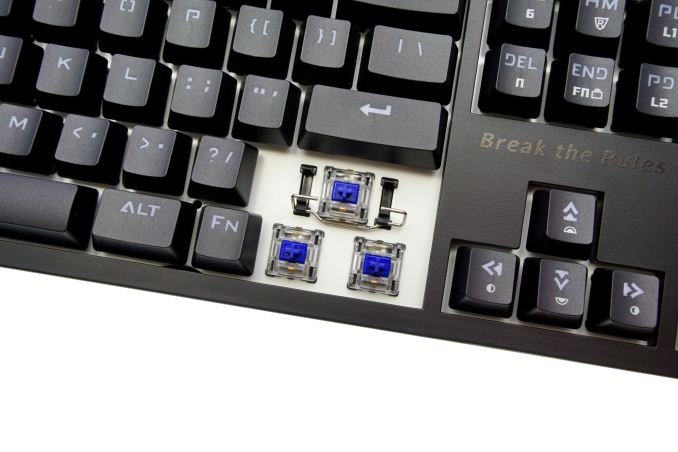 The removal of the plastic frame allows a clear view of the white steel support frame that provides support to the many keys and protection for the PCB. The main PCB is black and is well manufactured, without any imperfections that we could notice. 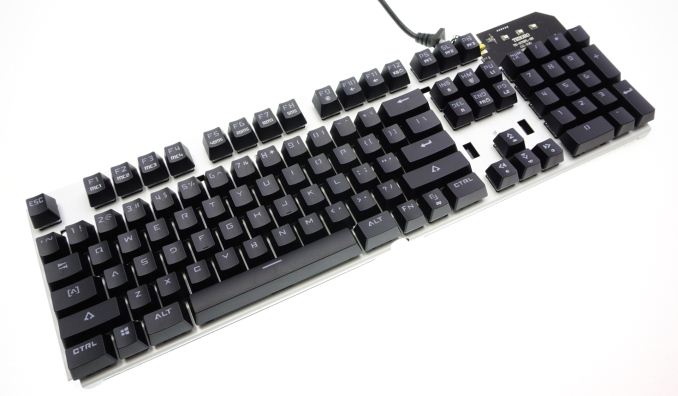 Tesoro has sprayed the main PCB with a thick varnish, making it essentially waterproof. In theory, the Excalibur SE Spectrum can withstand very serious drink spills. Sticky liquids like Cola variations however can still get inside the mechanical switches and make them sticky, even inoperative if they interfere with the infrared sensors. This same varnish prevented us from identifying the keyboard’s integrated circuits, as removing it damaged the lettering on the ICs as well. The keyboard’s microcontroller is not of great importance here because the Excalibur SE Spectrum has very limited advanced functions and no software support at all, therefore even a very low cost microcontroller can easily cope with its requirements. 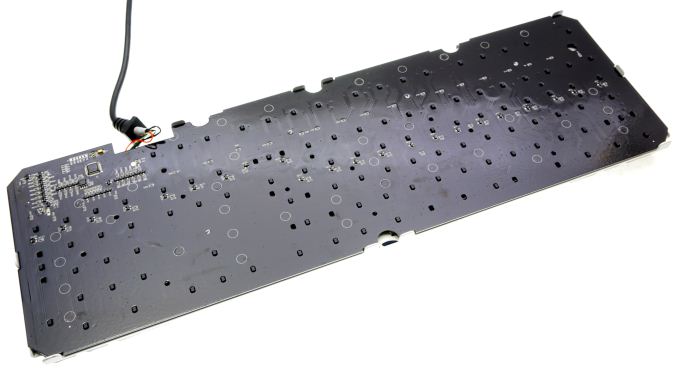 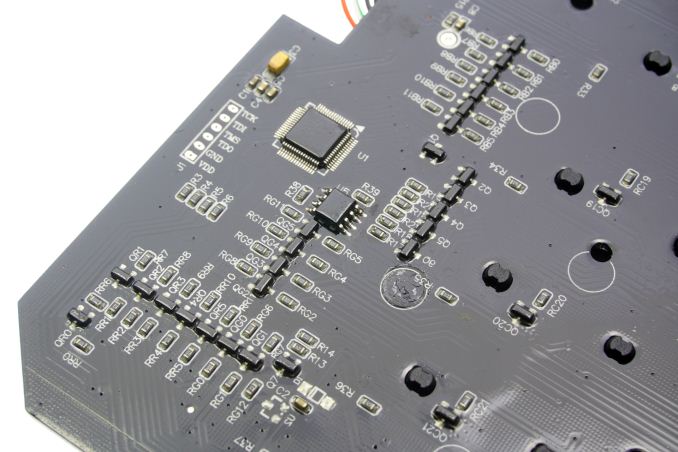