The original iPod offered improvements in virtually every aspect over the competition, but with the new iPod it is understandably difficult to make quite as large of an impact as the original (Matrix Reloaded vs. the original Matrix anyone?). With the iPod, Apple got so much "right" with the design that it wouldn't make sense to change what they've done an excellent job at already. Considering that there are still quite a few users out there that have never used an iPod, we'll start with the basics of the unit before looking at what improvements went into the new models.

The iPod is and always has been a hard drive based MP3 player; on the inside of every iPod unit you will find a special low-profile 1.8" Toshiba hard drive. The original iPod was available in 5, 10 and 20GB versions, while the new iPod comes in 10, 15 and 30GB SKUs. Obviously with such a large amount of storage, Apple fully expects users to store more than a handful of songs on their iPod, so the player is designed from the inside-out to support and manage all of the MP3s in your collection.

Before talking about how the interface helps achieve Apple's goals, let's talk a bit more about the hardware. In order to fill up the multiple gigabytes of storage on the iPod, Apple outfitted the unit with a 400Mbps Firewire interface, allowing you to transfer songs to your iPod at the maximum sustained write speed of the unit's hard drive (which is considerably lower than 400Mbps). The new iPod also features a USB 2.0 interface in order to tailor to the Windows user base, but we'll talk about how Apple implements USB interface later in this piece. The bottom line here is that getting songs onto the iPod is quick enough so that filling up your hard drive isn't a painful task.

In order to maximize battery life and reduce the risk of damage to the hard drive, the iPod attempts to keep its drive spun down as much as possible. Aiding in this is the use of a total of 32MB of on-board SDRAM that acts as a buffer for music you're playing, as well as a prefetch buffer for songs that you may listen to next. The prefetching algorithm isn't well documented (partially for IP reasons), but you can guess that it basically looks ahead at the next 32MB of songs (including the current one being played) and pulls them into main memory, thus spinning down the hard drive. If you happen to pick a song that's not in the buffer, the prefetching replacement algorithm kicks in and begins replacing songs you are less likely to play with ones that you are more likely to play. When songs are present in the iPod's 32MB buffer, flipping through them occurs instantly, but if you have to wait for the hard drive to spin up there's a noticeable pause as the drive spins up and begins copying data to memory. With the music always playing out of memory, the iPod will never skip, which is a feather in all solid state MP3 players' caps.

The strength of the iPod mainly lies in its interface, which is virtually flawless for navigating through the thousands of songs you will be able to put on the unit. There isn't an aspect of the iPod that's not designed for large numbers of MP3s; if you're able to fit all of the MP3s you'd like to listen to on one 128MB card then the iPod isn't for you.

The first screen you get when you turn on the iPod gives you access to the main menu settings. From the main menu you have the following options by default:

The playlists menu will take you to a list of all of your pre-configured playlists and on the new iPod it will give you instructions on how to configure a playlist on the fly. The old iPod's firmware would not let you construct a playlist using just the iPod itself, you would have to use the software that came with the unit to do so.

The browse menu will let you browse through your music collection according to one of five browsing criteria - artist name, album name, song title, genre or composer. All of these fields are taken directly from your MP3's ID3 tag, so you'll want to make sure your ID3 tags are done properly before transferring over your music collection; luckily there are a number of free utilities on the web for batch editing of ID3 tags for just this purpose.

The extras menu will take you to the clock, contacts, calendar, notes and games that you'll find on the iPod. Getting your contacts and calendar onto the iPod isn't as easy as you'd think, as the device will not sync to PIM software such as Microsoft Outlook. You have to copy the actual contacts and calendar entries over to your iPod if you want to have them there; definitely not a PDA replacement.

The settings menu will let you configure all of the various options associated with the iPod, such as the randomize feature, backlight timer, language, etc… The latest firmware on the new iPod lets you even customize the main menu by adding any of the submenus to it; for example, if you want quick access to browse by song title or quick access to any of the games. You can also turn off what items appear on the main menu if you prefer a simpler interface.

There are a number of equalizer settings that you can select from in the settings menu as well. 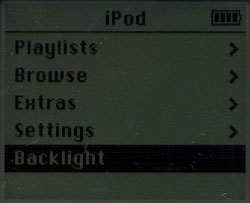 The final option on the main menu is the backlight option which, on the new iPod, not only turns the backlight on the screen on but also illuminates the text on the buttons in red for use in low-light situations. 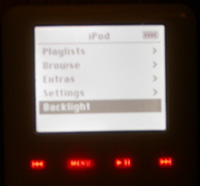 Overall the iPod interface is extremely intuitive and continues to be the easiest and quickest to get around your MP3s with.