Part of this BIOS overview mirrors that of our previous MSI X99 reviews and recent 100-series reviews due to the extreme similarity in options, aesthetics and features.

When MSI launched their second graphical BIOS/UEFI interface, it was quickly praised as implementing more ‘user experience’ than some of the other options on the market. At the time it used more color, different icon placement, and something a bit more than just tabs at the top of the screen. Fast forward a few years and MSI still had the same base layout for Z97 motherboards. There were minor updates – an XMP button, a proper overclocking menu layout, some help menus and fan controls, but it still had the same look and feel when other manufacturers were implementing ‘Easy Mode’ and a few other features to separate the common tools in the BIOS from some of the more esoteric. Now, MSI joins that crowd with their own ‘Easy Mode’ interface. 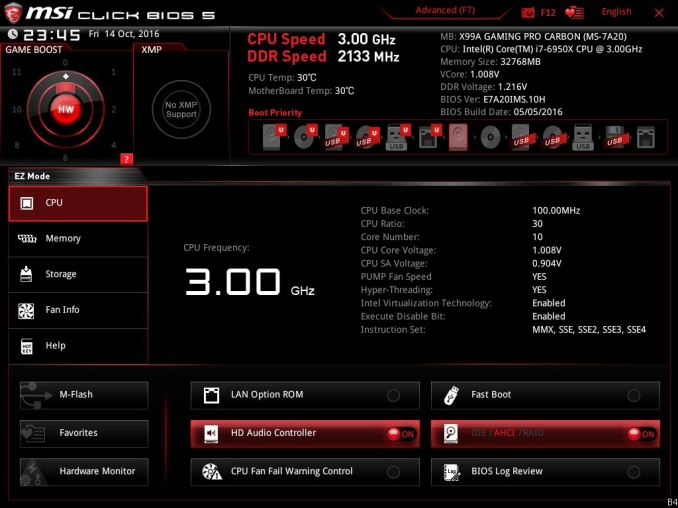 We still have the ClickBIOS nomenclature, but this at first glance looks like a nice ‘Easy Mode’. A BIOS gets plus points for system information on screen one – the motherboard, the processor, the speeds, voltages, BIOS version, temperatures and fan speeds. Rather than apply a thick layer, MSI separates easy mode into a few options on the left, so we have CPU info above, as well as memory info giving a per-module DRAM rundown: 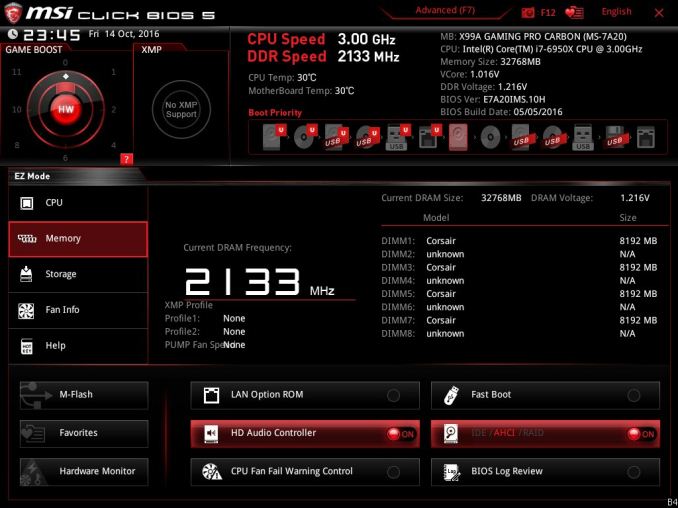 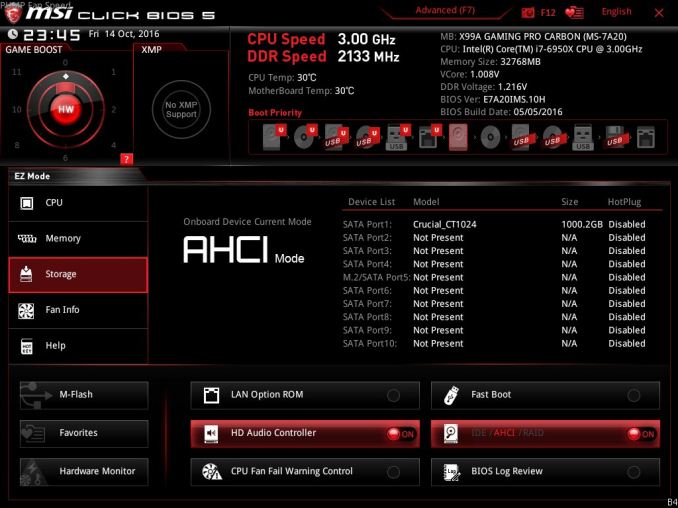 As well as fan controls: 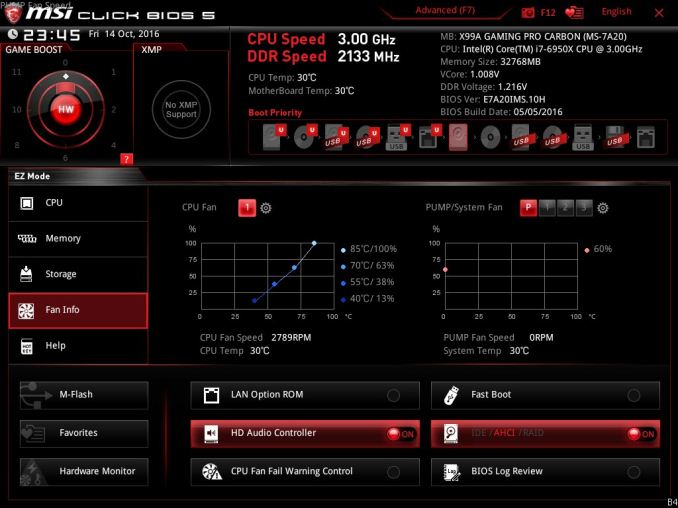 In the top left of the screen is MSI’s Game Boost button, so users can apply the auto-overclock (as shown in the help screen, up to 4.7 GHz on the Core i7-6950X) without opening the case and moving the wheel on the motherboard. Next to this is an XMP button for a one-shot XMP enable if the memory supports it.

In the fan screen above the fan gradients are not adjustable directly but there is a settings cog next to the fan numbers to take the user to the fan adjustment menu: 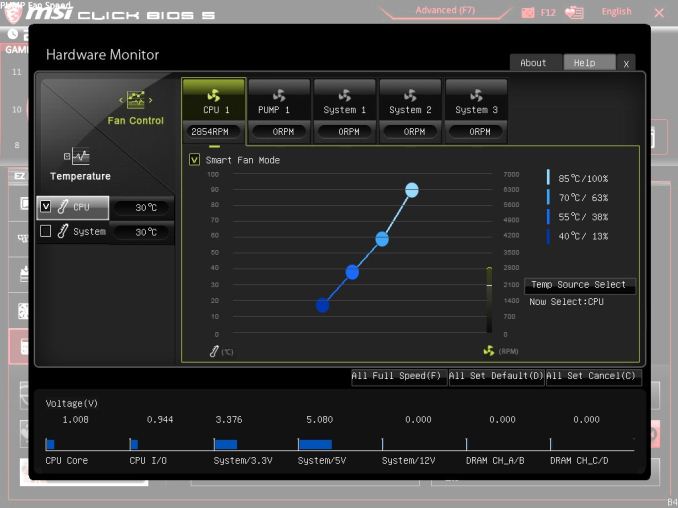 This fan adjustment menu is similar to previous MSI BIOSes, which when released was a nice touch giving users a graphical control over their fans.

We also get an option to flash the BIOS (M-Flash) and the hardware monitor, which is another link to the fan control. MSI also links to the ‘BIOS Log Review’, which brings up a list of BIOS changes since entry, similar to what we have seen on other motherboards.

Pressing F7 moves into the advanced mode, which despite the Pro Carbon naming does not get a Pro Carbon color scheme. Instead we have the Gaming shield (it’s the GAMING Pro Carbon, remember), and a multi-color show because of LEDs. 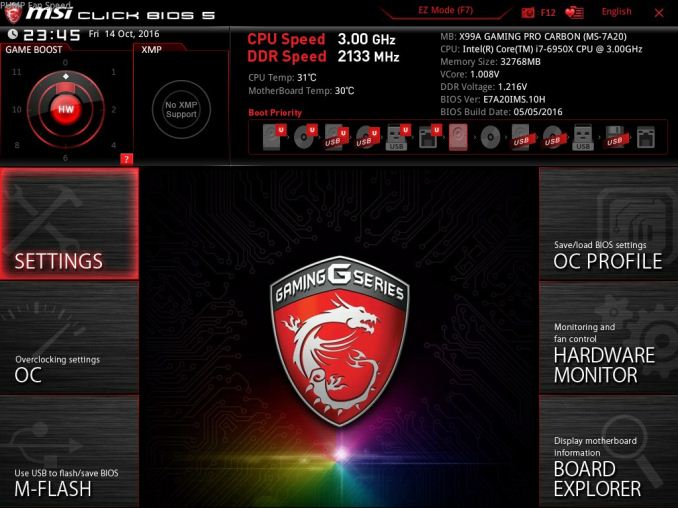 As far as the advanced mode goes, it runs in line with previous MSI BIOSes we have seen before with a singular main upgrade which we’ll get to in a bit. Each of the buttons around the sides of the advanced mode gives access to different sub menus: 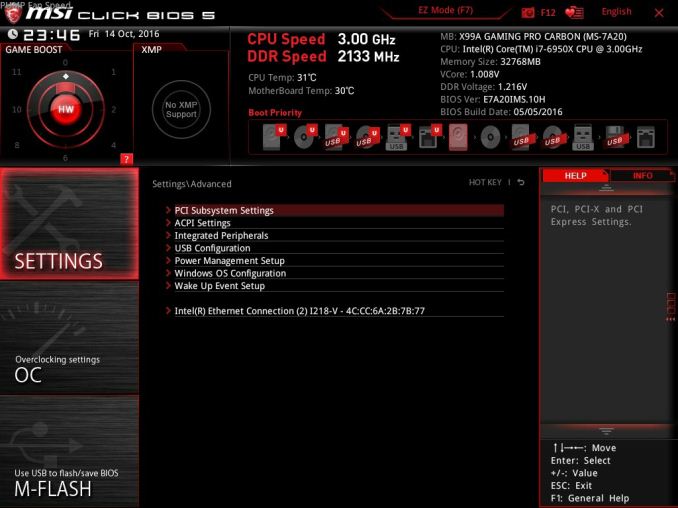 Nothing much out of the ordinary here. 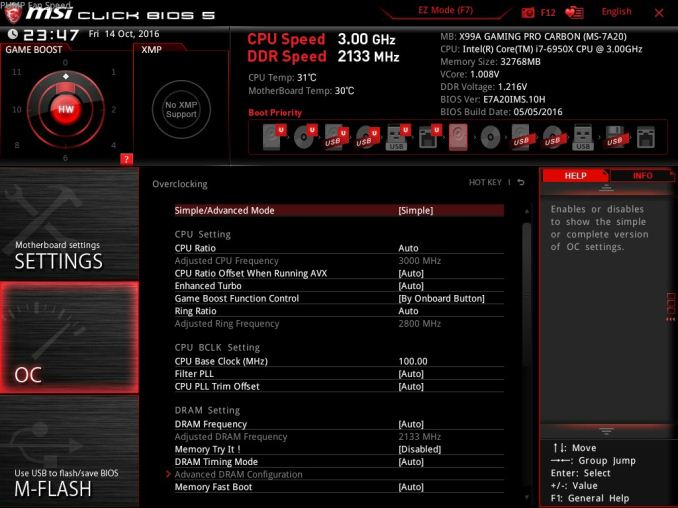 The overclock menu retains the new option we saw on Z97 by offering a ‘Normal’ and ‘Expert’ mode for those that understand the processor to a deeper layer by giving more options. Typically we recommend most users stay with the CPU multiplier and CPU voltage settings, which gives great overclocks for most – however extreme (sub-zero) overclockers always want more control. 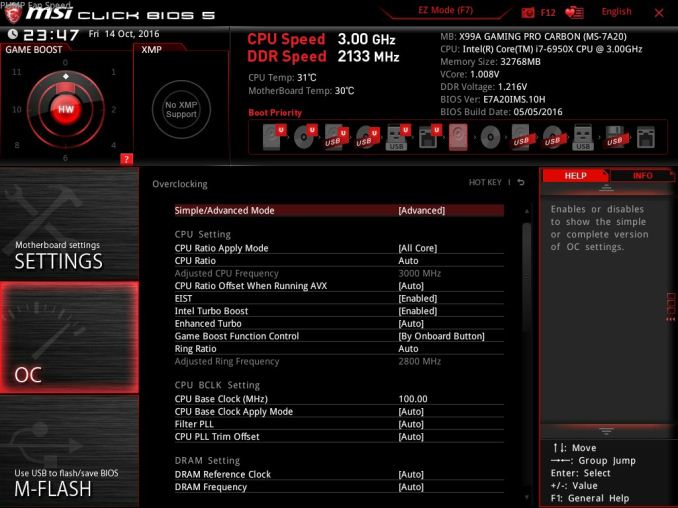 I’m going to point out MSI’s awesome fix to an issue I have had with MSI motherboards for years, and it relates to the VDroop control / load-line calibration (LLC).

The concept of this feature is to maintain a constant voltage across the processor (because drawing current causes a drop), and it helps with stability. Current processor design means that a voltage drop occurs when the processor is being used heavily, which is typically compensated for to a variety of levels of LLC. For overclocking stability, the level of LLC can be adjusted with great benefit, ideally providing a constant voltage no matter the load. Previously on MSI motherboards, while there was a setting for the LLC, the adjust option did not make sense, offering % values with no suggestion of base line or effect. This changes, exactly in the way I wanted it to. 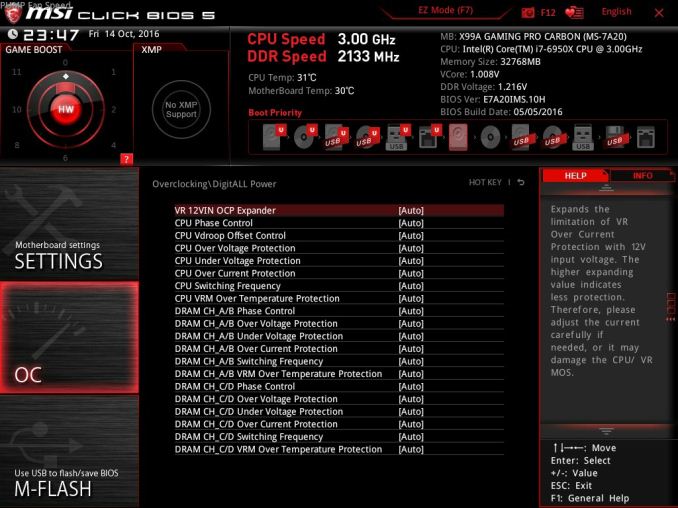 Under the DigitALL Power menu, we get this option for CPU Loadline Calibration Control. There is a diagram is there to explain what each one does is on the right hand side. Of course, the graph is purely qualitative, but that doesn’t matter. Having this ability to decipher whether an option makes the voltage level more constant or less constant wasn’t shown before, and this minor adjustment (it should have taken less than a couple of hours) crosses off the list one of the major issues I’ve had with MSI overclocking in the past.

Ranting aside, the rest of the BIOS falls in line with flashing tools, fan controls, and Board Explorer: 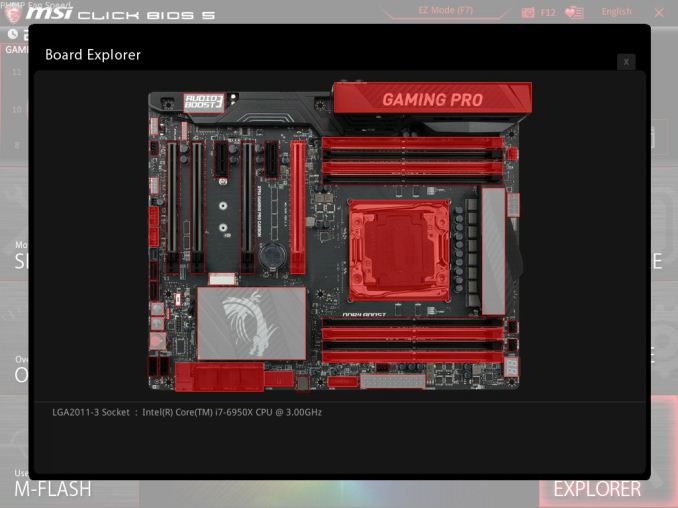