The benefits delivered by Kaby Lake over Skylake are passable from a performance perspective. That said, the Kaby Lake media engine in the Intel HD Graphics 6xx has moved from lagging behind NVIDIA's VPU to becoming the leader in the space. In addition to HEVC Main as well as Main10 decode support, Intel is also delivering 10-bit VP9 decode. The benefits of the latter are debatable, but, on paper, the Kaby Lake GPU delivers the goods for HTPC users. The MSI Cubi 2 disappointed us a bit on this front by not opting to enable a HDCP 2.2-capable HDMI 2.0 output. This requires a LSPCon (approximately a $2 addition to the BOM according to our industry sources), and ASRock's Beebox-S 7200U integrates one. Kaby Lake's additional DRM capabilities also enable Netflix 4K streaming. All in all, the Beebox-S 7200U is an effective HTPC for casual 4K media consumers - either OTT, or, from local sources.

ASRock also manages to score on some other differentiation aspects - the availability of a USB 3.1 Gen 2 Type-C port, thanks to the ASMedia ASM1142 bridge controller, as well as a compact footprint while retaining support for a 2.5" drive. Unlike some of the other UCFF PCs in the market that opt for Realtek NICs, the Beebox-S 7200U does sport an Intel Gigabit LAN controller. 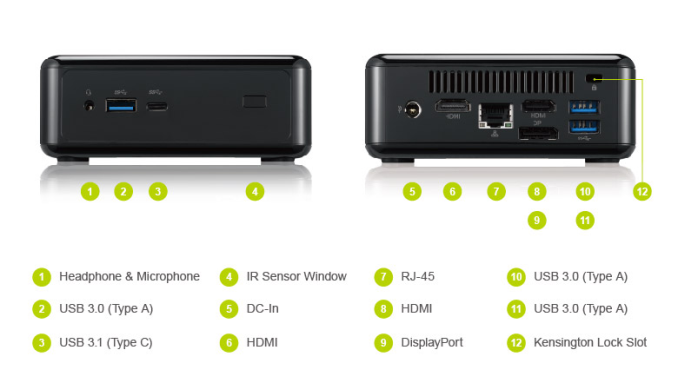 Positives aside, ASRock still has some scope for improving the Beebox-S. Most of our feedback from the Beebox-S 6200U review are still valid since the chassis design and motherboard components of the Beebox-S 7200U are almost the same (except for the processor and the BIOS).

The internal layout of the unit is very cramped, making even SODIMM installation a bit of a challenge. Installing a 2.5" drive is even more of a pain with the necessity to route the SATA cable and power wires around the SODIMM. While the initial setup issue is a one-time hassle, the effect of the SODIMM heating up on the SATA cable is a bit of a worry. ASRock must shift to a single flexible data/power cable (similar to the one used in the DeskMini 110) to address this issue. Another candidate for addressing is the decision to go with a 1x1 802.11ac WLAN card instead of the 2x2 configuration used by the Intel NUCs. 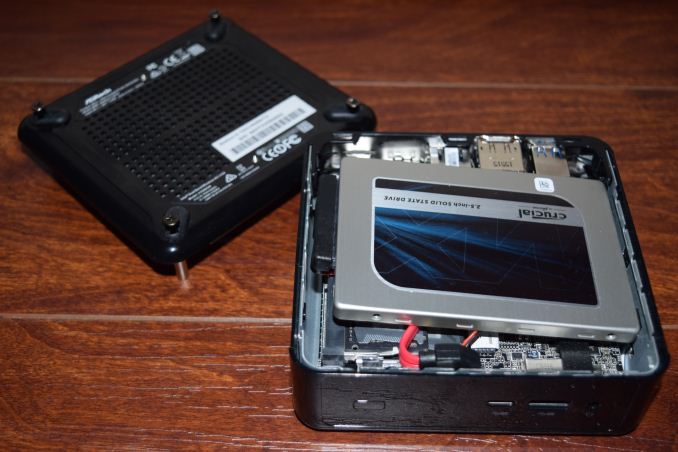 It is best to use a M.2 2260 SSD in the unit, but, 2280 SSDs are more common. Installing such a SSD is possible, but, requires a separate plastic tab. The M.2 SSD also has no thermal protection support from the chassis design. We also found that the QVL (qualified vendors list) doesn't include many popular NVMe SSDs such as the Toshiba OCZ RD400. Usually, SSDs that are not in the QVL work without problems, but, we found that the Beebox-S 7200U just wouldn't recognize the RD400 in the M.2 slot. To top this, there is definitely some issue with the latest BIOS and the tested Samsung SSD 950 PRO NVMe SSD - the core clocks idle at the maximum rate and the Prime95 torture test occasionally results in thermal runaway and system freezing. Neither of these issues were observed with a 2.5" SATA SSD. Our suggestion to readers contemplating the purchase of a Beebox-S 7300U is to go with a 2.5" SATA SSD instead of a NVMe SSD.

The Beebox-S 7200U is currently available on both Amazon and Newegg for around $350 (though the Amazon first-party listing was backordered when we last checked). The corresponding MSI Cubi 2 and GIGABYTE BRIX models are currently listed at $375 and $391 respectively. Despite the shortcomings that were identified during the course of our review, the Beebox-S provides the best value for money amongst the Kaby Lake UCFF PCs currently in the market.