Although horizontal CPU coolers are likely to always remain a niche market, the continued growth in and shift to smaller form factor PCs has given them a higher profile among system builders as of late. These lower-profile coolers give users additional options for builds that are facing height constrains while the builder wants or needs better than stock cooling. Each of the three coolers in this review requires a different amount of vertical clearance, starting from just 60 mm and reaching up to 115 mm, thus each of them is practically meant for a specific case design.

The Reeven Steropes is the shortest cooler of this review, requiring just 60 mm of clearance. Reeven achieved this by installing a low profile cooler on the narrow fin array, reducing the overall height of the cooler down to the absolute minimum, allowing compatibility with even the narrowest of HTPC cases. The fin array is barely high enough to allow for normal height RAM modules to be installed beneath it and barely wide enough to enclose the heatpipes. Still, despite the low static pressure of the low profile fan, Reeven’s engineers cleverly stole a little bit of performance by expanding three of the heatpipes to carry some of the thermal energy to the center of the fin array and by turning the base of the Steropes into a small heatsink. The result is a very low profile cooler that offers remarkably good thermal performance for the size. Its compatibility with the AM1 socket suggests that the Steropes is one of the best aftermarket options for these systems, with thermal performance that would be a complete overkill on these low power CPUs.

Phanteks’ PH-TC12LS is of similar size and shape to the Steropes, but designed with a full size 120 mm fan instead. This raises the required clearance to 74 mm, making the PH-TC12LS incompatible with very narrow HTPC cases, but it should fit in most ITX/HTPC cases that are meant for performance PCs. The PH-F120MP high static pressure fan allows the PH-TC12LS to achieve good performance figures while maintaining reasonable noise levels. The design is being let down by its simple, small fin array that does not offer enough surface area for heat dissipation, reducing the effectiveness of the high airflow produced by the fan. Overall, the thermal performance of the PH-TC12LS is good in relation to its size, but we feel that the design is unbalanced and that it could be fine-tuned to perform even better. 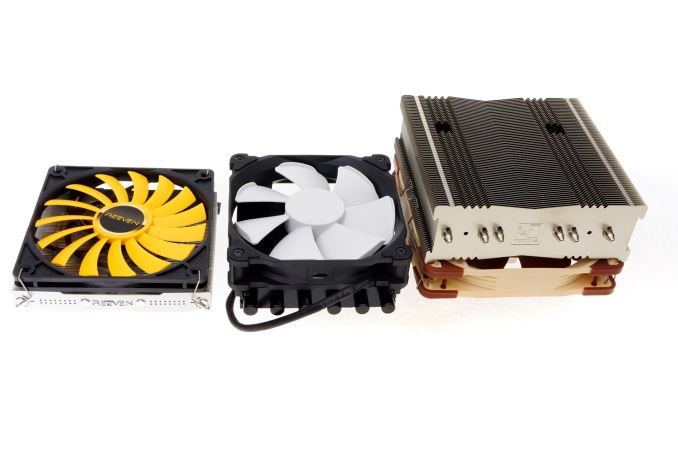 The third cooler of our review, the Noctua NH-C14S, is virtually incomparable with the previous two coolers. It has over twice the mass of the other coolers and requires a much greater vertical clearance - at least 115 mm depending on configuration - instantly ruling it out as an option for the vast majority of HTPC cases and other narrow designs. If the fan were to be placed at the top of the cooler in order to increase the clearance of the RAM modules, it is unlikely that the NH-C14S will be compatible with any desktop or HTPC case, as it would not even fit inside designs that are meant for top-tier HTPCs. It is apparent that Noctua has designed the NH-C14S solely for users that are planning to build very high performance HTPC system with sizable cases and want a product that can compare to high performance tower coolers. Naturally, it cannot reach the performance of coolers such as the NH-D15 or the Cryorig R1 Ultimate, but it does get close enough to warrant excellent performance on any CPU currently available, overclocked or not. It is an expensive cooler but the quality and performance are well worth the money. The true enemy of the NH-C14S is its size, which makes it incompatible with most of the cases that have been designed for compact or HTPC systems, reducing its potential market down to the few users that own spacious HTPC cases.