The MSI Cubi2-005B provided us with the first opportunity to evaluate Kaby Lake-U in a desktop PC. MSI has decided to keep the normal TDP of 15W for the unit - that means we only see performance similar to what is obtained in the high-end ultrabooks. Some vendors like GIGABYTE like to utilize the configurable higher TDP for the CPU along with a noisier thermal solution. Other vendors like MSI prefer a better acoustic profile while maintaining decent performance. We are still not convinced by the absence of a M.2 2280 slot in the PC when others with the same form factor like the Intel NUC are able to accommodate it. The Cubi 2 also decides to forego the full-HTPC solution route by not supporting 4Kp60 over its HDMI port. HDCP 2.2 also seems to be absent. However, the other media capabilities like full hardware decode for 4Kp60 HEVC Main and Main10 profile videos are present in the PC.

Kaby Lake-U deliver on its promise of better power consumption and energy consumption numbers for the same workload when compared to Skylake. It delivers a solid UCFF PC platform for consumers wishing to upgrade anything based on Haswell or older generation PCs. 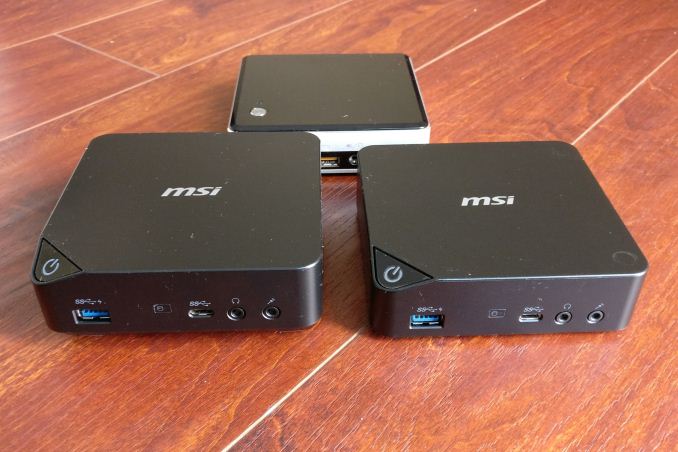 MSI deserves praise for creating a design that enables users to accommodate 2.5" drives with minimal to no impact on the form factor of the machine. However, there is definitely scope for improvement - MSI should definitely put in a M.2 2280 slot instead of the current M.2 2242 for SSDs. In addition, their RAM slots also need to be better design. Fitting in SODIMMs with just thick labels over the DRAM chips was a no-go. We had to remove the labels so that the SODIMMs could fit in better. Otherwise, one of the two tabs on either side wouldn't fit over the SODIMM, and Windows would end up with BSODs. Strangely, we didn't have any such trouble in the Cubi 2 Plus reviewed earlier this year (though, that was in the mini-STX form factor)

MSI has three different SKUs for the Cubi 2. In addition to the Core i7-7500U-based Cubi2-005BUS reviewed here, we also have the Cubi2-007BUS with Core i3-7100U and the Cubi2-006BUS with the Core i5-7200U. Other than the core CPU, the other features of the units are all the same. In terms of pricing, the barebones configuration range from $295 to $500, though we did see Amazon's prices fluctuate a bit while processing the review.

On the whole, the Cubi2-005B shows users the base performance and featres that one might expect from a Kaby Lake-U UCFF PC. Over the next few months, we will be reviewing a few more Kaby Lake-U PCs that bring in features like HDMI 2.0b and full Netflix 4K support with HDCP 2.2.