NVIDIA was the first to tout the benefits of a dual channel DDR memory architecture on the desktop with their nForce chipset, announced almost two years ago. With nForce2, NVIDIA finally had a success on their hands and began taking advantage of the added memory bandwidth offered by a dual channel (128-bit) DDR memory interface. Through optimizations of the ball layout and packaging of the nForce2 IGP/SPP (aka North Bridge), NVIDIA helped enable cost effective 4-layer motherboard designs with a 128-bit DDR memory interface, something most nay-sayers claimed was impossible.

Intel followed a very similar methodology with their 875P chipset which, as you can guess by now, also features a dual channel DDR memory interface. By effectively designing the physical interface of the MCH to the motherboard from the outside-in, Intel optimized the MCH for use in cheap 4-layer motherboard designs.

Normally in chipset design, the packaging team worries mostly about internal routing and pays less attention to the routing that motherboard manufacturers will have to do once the chip is in their hands. With the 875P, special attention was paid to the ball layout on the interface side of the MCH to provide for optimal routing. Remember that with a dual channel memory architecture there are twice as many memory interface pins, and for 64-bit DDR channels that makes things quite messy on the motherboard.

This layout optimization is something that is present on the nForce2 and is mainly in place because of the 865 chipset, as that will be a much more cost-sensitive solution than the flagship 875P. Intel is also quite proud of the fact that the 875P's MCH has a package the same size as the 845G, thanks to a smaller manufacturing process. 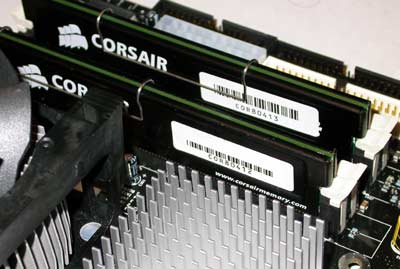 The MCH is relatively flexible when it comes to basic memory speeds and configurations, but is quite picky when you dive a bit deeper in order to ensure stability and that the chipset meets Intel's rigorous validation standards. What we mean by this is that the 875P can be run in either single channel or dual channel mode, and supports DDR266/333 as well as DDR400 operation. With that said, there are a few very specific requirements for dual channel operation:

If any of these stipulations are violated, then Intel specifies that the motherboard should default to single-channel mode, however it is up to the motherboard manufacturer to determine how strictly they wish to enforce this.

The DIMMs in a pair may be different brands, timings and/or speeds, the timings/speeds will be determined by the slowest of the two modules.

Unlike the 865, the 875P MCH supports ECC memory which is one indication (you'll see another later) that the 875P is not only targeted at enthusiasts but also the entry-level workstation market.

One question end-users will be asking themselves is whether the dual channel DDR benefits are worth upgrading to 875P instead of an 845PE motherboard that has been tested to work at the 800MHz FSB. In order to answer this question we looked at the 875P in both single and dual channel memory configurations:

Going to a dual channel architecture ends up improving performance between 0 and 15% depending on the application, which isn't insignificant but its worth should be determined by the price difference in motherboards and what the added performance means to you. Also remember that with an 800MHz FSB 845PE motherboard you won't get any of the additional features that come with an 875P solution.