The OpenPOWER Saga Continues: Can You Get POWER Inside 1U?

We tested the energy consumption of our servers for a one-minute period in several situations. The first one is the point where the tested server performs best in MySQL: the highest throughput just before the response time goes up significantly. Then we look at the point where throughput is the highest (no matter what response time). This is the situation where the CPU is fully loaded.

At idle, both of the POWER8-based servers reduce their clockspeed to 2.06 GHz and power-gate the cores they do not need. However, the Tyan GT75 PSU is probably more efficient in this case, and the GT75 is a less complex server as well. As a result, the idle power is significantly lower than the S812LC. Still, it is nowhere near the Intel Xeons.

Once we test the server under load, the Tyan GT75 demands a lot more power than the S812LC. That might seem contradictory at first sight, as the latter is equipped with more power hungry CPU. The main culprits are the small, extremely high RPM 1U fans inside the Tyan, which have to work hard to keep a 170W CPU cool in such a cramped environment. 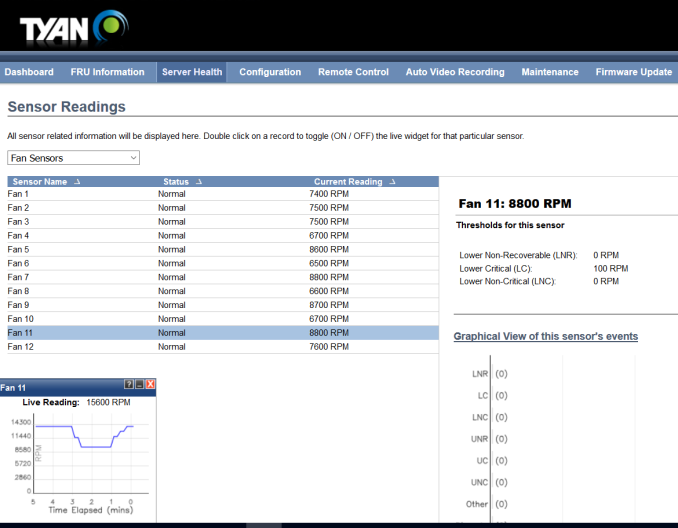 Notice how the IPMI software reports 8800 RPM, but in reality the fan is running at a mindboggling 15600 RPM. A total of twelve such fans results in the cooling system as a whole consuming a lot of power.

This kind of "performance first" CPU policy really needs larger fans and more room. Case in point: in a roomier 2U chassis the load power consumption of a POWER8 setup comes very close to the contemporary 22 nm Xeon E5 v3. It will be interesting to see how this works out in the 1.25U high Rackspace BarrelEye.

Intel's "Broadwell-EP" (Xeon E5 v4) wins here by an vast margin. And there is little doubt that the next generation Skylake Xeons will probably do (slightly?) better.

However, don't count IBM and OpenPOWER out yet. First of all, MySQL is better optimized for x86-64 than for POWER8. Since MySQL is the second most popular database engine (and will probably overtake Oracle soon), we feel our choice is justified. However, it is worth mentioning that PostgreSQL (number 4) and MongoDB (5) have been fully optimized for OpenPOWER and show gains of up to 30%. Lastly, IBM's POWER9 should also do quite a bit better as a result of an improved microarchitecture and being baked with a state-of-the art 14 nm SOI process. The 14 nm POWER9 versus the "tweaked 14 nm" Intel Xeon E5 version 5 should prove a very interesting comparison.