The Razer Blade Pro is not like the desktop replacement machines from Clevo and MSI, but it's still very much a mobile workstation. It's outfitted with 32GB of 2133MHz DDR4 memory running in dual channel mode, NVIDIA's GTX 1080 GPU, and an Intel i7-6700HQ CPU. At this point Intel's Skylake parts are a known quantity, and 6700HQ has shown up in a multitude of laptops over the past year. It's a 45 watt part with a base frequency of 2.6GHz and a peak turbo frequency of 3.5GHz. The Blade Pro launched a bit too early to use Kaby Lake, although Kaby Lake doesn't really bring a significant improvement in performance so it's not really an issue anyway. The implementation of G-SYNC means that the Intel HD 530 GPU is unused, so the Blade Pro is always working with the GTX 1080. 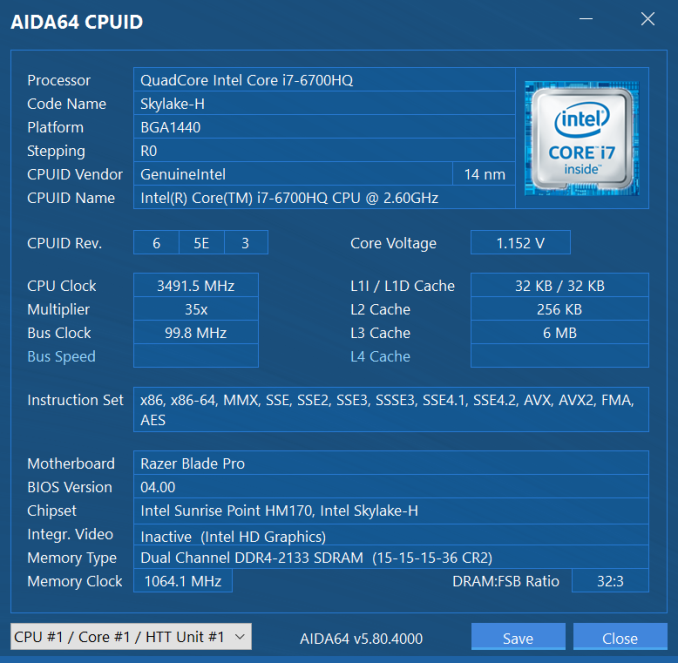 Even though we've tested many other machines that use i7-6700HQ, the different memory configuration and GPU in the Blade Pro make it worth running it through our standard suite of laptop benchmarks. Issues with x.264 getting stuck on the final pass prevented me from getting scores for that test, so I've opted to omit it and continue with PCMark, Cinebench, and our JavaScript web benchmarks.

PCMark is a more holistic kind of benchmark than the other tests that we run. Many benchmarks focus on a single component, such as a JavaScript benchmark to evaluate single-threaded CPU performance or a gaming benchmark to characterize GPU performance, but PCMark attempts to measure the performance of a system when considering the interaction of components like the CPU, GPU, RAM, disk speed, etc.

In PCMark 8 the Blade Pro performs well in the Creative test suite, but doesn't perform as well in the Work or Home tests. However, it's important to note that the range of scores is much greater in the Creative test, putting the Blade Pro with its GTX 1080 ahead of most other laptops. In the other two tests the score is on the lower end, but it's still similar to those from other laptops that use i7-6700HQ.

Cinebench is heavily cpu-focused, with both a single-threaded and a multi-threaded test. Previous devices that use Intel's Core i7-6700HQ have fallen in line with roughly the same scores, and the Blade Pro is no exception. However, it's worth noting that those other i7-6700HQ laptops can retail for less than half the price of the Blade Pro, and given the Blade Pro's position as an expensive no-compromise machine, using the 2.9GHz i7-6920HQ would have been a good way to outshine the competition in CPU-focused tasks and benchmarks. So while the Blade Pro does perform as well as similarly specced laptops, you would think that the high price would net you an advantage over the rest of the market.

Like the CPU-focused tests, the JavaScript web browsing benchmarks really highlight a device's CPU performance. The testing has evolved here, with the default browser switching from Chrome to Edge when Windows 10 launched, so there is som variance here due to the browser. In this case the Blade Pro is in line with other i7-6700HQ laptops, and with tests like Octane the scores are so high that even a gap of 300 points could simply be due to testing variance.

The Blade Pro comes in three different storage configurations of 512GB, 1TB, and 2TB. All of these involve two SSDs in a RAID0 configuration. At this point I really need to address this continued nonsensical trend in the gaming machine market. Using two SSDs in RAID0 is not advantageous; it actually presents problems. Using two separate SSDs takes up more space internally, which is at a premium in this kind of machine. It also essentially doubles the failure rate, because you now have two drives that could be a point of failure, and in this setup the loss of one drive is catastrophic. Finally, RAID0 doesn't improve performance in any meaningful way with SSDs. In this scenario the data is striped across both drives, but SSDs already implement multiple forms of parallelism internally, making this mostly pointless when you could just get a larger drive. This kind of setup boils down to marketing driving product decisions, and that's not a framework for good decision making.

Moving on to the actual drives, I've checked on both a 512GB and a 1TB unit that the drives in use are Samsung's PM951. I've heard from other people that their units use PM961, so it's not clear if some sort of multi-sourcing is going on here, but mine are definitely PM951 and I can only evaluate what I'm given. Regardless of whether it's PM951 or PM961, I'm really shocked to see a TLC drive in a $3700 laptop. Frankly, it's just not acceptable. One point I neglected to mention above is that using two separate SSDs in RAID0 instead of a single larger SSD increases the cost by about 20%. So effectively, money is being spent to check a box on a marketing sheet even though it doesn't provide any benefit to the user, when it could be spent on using an altogether better SSD. 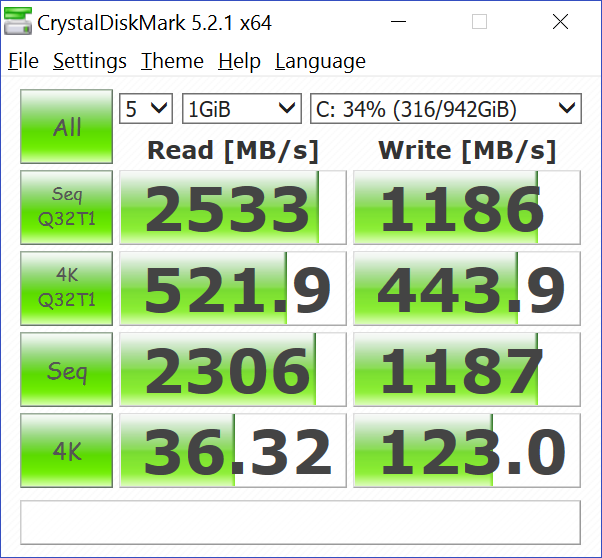 At this point SSDs have gotten so fast that you'll usually be bottlenecked by some other part of the system before the IO performance becomes an issue. CrystalDiskMark isn't exactly comprehensive, but it gives a basic idea of SSD performance. Sequential read speeds surpass 2GiB/s, and sequential write speeds surpass 1GiB/s. My complaint is really just based on the fact that such an expensive laptop is shipping with anything but the best available SSDs. In this case the 1TB arrangement of two 512GB PM951s is actually slower with random read and write speeds than the Clevo P870DM2 outfitted with only a 256GB Samsung 950 Pro, despite the 950 Pro's overwhelming disadvantage with the number of dies for use with internal parallelism. For $3699.99 I would expect nothing less than Samsung's SM961, and I'm pretty sure Razer would still make a hefty profit on each unit if they used it.